Sitting in her principal’s office, Quina Barba thinks about it for a few seconds before explaining why she thinks the decision that her public Infant and Primary school take on Compulsory Secondary Education (ESO) three years ago was a good idea: “A lot of our student body would have failed if they had gone to a regular high school. Because we are a school and our work methodology, our structure and the reinforcements we put in are very oriented to accompany. When high school teachers come, they are amazed at first, and then they don’t want to leave.”

Barba directs the public school of La Font d’En Carròs, a town of 3,800 inhabitants located 45 meters above sea level and six kilometers from the Mediterranean, south of Valencia. His center is part of a change that is advancing in public schools: 270 Infant and Primary schools have incorporated ESO and dozens more are expected to do so in the coming years. 10 years ago they did not reach a hundred. Galicia, Castilla y León, Asturias and Extremadura have been applying the model for a couple of decades as a solution for their rural school, but in these territories the model has been stagnant for some time or is in decline. The impulse is coming from communities such as Catalonia, Aragon, Madrid, the Valencian Community and the Balearic Islands, where it is also being implemented in urban areas as a way of maximizing school spaces and, in some of them, also for pedagogical and social reasons. 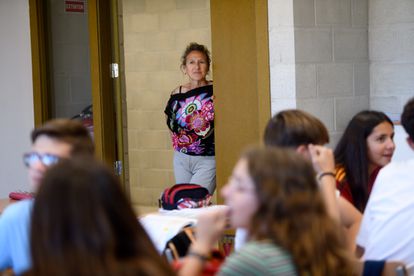 The model has positive elements and others that generate controversy. The sociologist Miquel Àngel Alegre mentions among the first that it facilitates the transition between primary and secondary school, a step in which many students get lost; it favors the methodological innovation of the centers and the projects in which kids of different ages participate; encourages secondary school teachers to learn from infant and primary teachers, and vice versa, and allows educational facilities to be optimized in the face of falling birth rates, representing an alternative to the closure of public schools. It also reinforces, adds Alegre, the ability of the public school to compete with the concerted one in the face of a certain profile of parents: “There are families who are concerned about the change to the institute because of what it has in contrast for a small kid who comes from school . This formula allows the public to offer, like the concerted one, the option of choosing everything at once from the age of three to 16″. This argument is especially important, says Iñigo Salaberria, president of the Basque association of public centers Heinze, in a context of accelerated decrease in student body. In some integrated schools, usually old, only studies up to the second year of ESO (the equivalent of the old eighth of EGB), but almost all offer the complete stage.

Integration also presents risks. The one that most worries the director of a Madrid school who asks not to be identified is that, in her opinion, the regional government of her community, where there are already 32 of these centers, takes advantage of them to “invest less” in education . And in many cases, their ESO students do not have the same resources, such as laboratories or technology rooms, that they would have in an institute. At the same time, admits the director, integration allows secondary school students to use the dining room service, something that does not happen in the vast majority of public institutes in Spain. 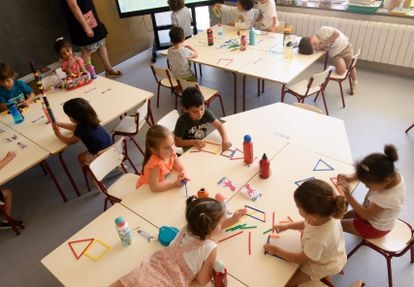 “The general balance is very positive”, says Ricardo Civera, director of the public school El Espartidero, in Zaragoza, which incorporated ESO four years ago; “When, for example, fourth-year secondary school students go down to work on a reading or math project with the younger children, we drool.” Elena Escribano, mother of two students at the center, sums up the idea that moves many families to prefer this type of school to the public one: “Children are more protected, because they continue with their classmates, their teachers and in the usual environment until the 16″.

The Zaragoza school that Civera directs now has 800 students and also a problem that it did not have before. “We have serious space difficulties. We have lost common areas that give a lot of vitality to our idea of ​​a center. Our library now works as a library, a multipurpose room, a mini computer room, a place to do extracurricular activities…”. 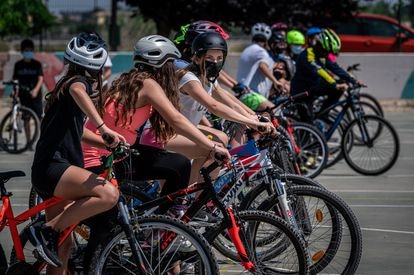 The schools that assume the ESO (in some cases it happens the other way around: the institute incorporates infant and primary) often have an innovative profile. Something especially evident in Catalonia, the territory where they have spread the most and where they are called school institutes. At Les Vinyes de Castellfabib, in Barcelona, ​​secondary school students work by areas of knowledge, instead of by subjects, and in a competent way, and teachers incorporate the resolution of daily life situations into learning: “It can be a problem that arises in the municipality or that the students put themselves in the situation that, for example, they are editors and have to publish a new book”, explains its director, Quim Preixens. The teacher assures that the results are good in the internal evaluations, in the external ones carried out by the Generalitat and in the feedback given by the institutes to which their students later go to study Baccalaureate or Vocational Training.

Preixens points out that one of the school’s strengths is the “emotional support” it provides to the kids. “They don’t have the feeling of loss that many leave school, because they can continue to see their primary teachers. At the beginning of secondary school, many times they come looking for those of us who have been their role models in primary school and they tell us: ‘It’s costing me a bit’, ‘it gives me respect’, ‘I don’t know how I’m going to carry that now in the classroom let’s be 30’… They seek our support because they haven’t yet gained confidence with the high school teachers. And yet they are teachers whom they have been seeing in the center and with whom at specific times they have been able to share pedagogical activities”. 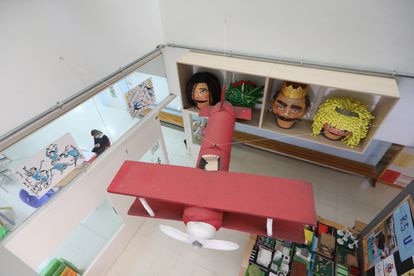 Model of an airplane and other pieces made by students at the Daniel Mangrané Institute School in Tortosa.JOSEP LLUIS SELLART

The most important and the most difficult part of the model

The most important for the system to work and also the most difficult to achieve, says the director, is the understanding between the teaching staff of the three stages. “What we most complain about in high schools is possibly the lack of coordination time to work more often together. Little by little, each center finds its own strategies to do it, but many times it is still achieved by the good will of the teacher. Our fight is that it does not depend on good will, but that we have a time frame that allows us to coordinate in the transversal work of the center and do many joint activities”.

The model favors, in addition to methodological innovation, organizational innovation, says sociologist Miquel Àngel Alegre. The Catalan school institutes, for example, will begin to apply the split day (with classes before and after lunch) in all stages next year, something that was lost years ago in most public institutes. And at the same time, warns the sociologist, it reduces the opportunities to fight against school segregation: “The change of stage gives the possibility of trying to break segregation by ascribing primary schools to secondary schools with a different composition. And with the school institutes you can’t”.

Contrary to what comes to mind for many people when thinking about this educational formula, none of those interviewed in this report considers that having students of such different ages together poses a danger. Although one of the rules of the model is that the kids from one stage to the other do not coincide except when joint and supervised activities are scheduled. Llum, a fourth-year ESO student at the Font d’En Carròs school, sums up in one sentence what the model contributes and subtracts to her: “In general, it seems very good to me; We continue with the same friends, we are close to home and we have it easier. On the other hand, I think we all would have liked to meet more people when we got to high school.

On hells and tax havens

What was. what will. About sheep and dealing with the German past.