Profile | Angelo Sodano, when the devil wears a cassock

“In those days, the good man was confused with the bad man.” The quote is from the great writer Chateaubriand and it fits Angelo Sodano like a glove, whose death on May 27 moves the Vatican in recent days. Grandiloquent tributes have been published in the Italian Catholic press and a grandiose homily was delivered (from which Pope Francis kept a prudent distance).

In other parts of the world, this canonical death, at the age of 94, has awakened a completely different memory. The one of the thousands of undercover sexual abuses, from Rome, by Angelo Sodano. Voices had been raised for a long time to denounce the Secretary of State, that he should have finished his days in prison after being dragged before the justice of men.

John Paul II’s prime minister was the most powerful man in the Vatican during the 1990s and 2000s. Dean of Cardinals, Sodano racked up roles like few churchmen before him. His diplomatic balance is generally considered positive with regard to the Yugoslav crisis, the first Gulf War, the conflicts in Kosovo and Afghanistan, or even the numerous tensions in the Holy Land and in Latin America during his mandate.

A formidable diplomat, Sodano belonged to a tough school of thought: tough on communism; harsh against liberation theology, that leftist Catholic current so present in Latin America; tough on family issues and against feminist or gay movements. But his line was soft on the subject of sexual abuse. Very flexible. Sodano has often been compared to Cardinal Mazarin, the Italian prelate of state who served both the pope and the kings of France, and whose abuses of power, number of enemies and secret love affairs are legendary. For him, the reason of State imposed the lie. 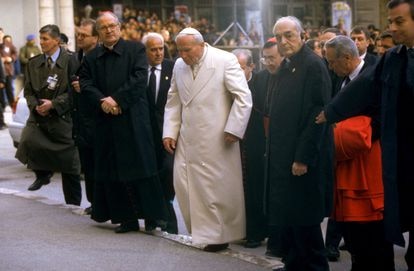 The career of Sodano, a Piedmontese Italian, strongly built man, oddly contrasting with his very effeminate nature and love of lace, is a straight line. His father was a deputy for Christian Democracy. He, perhaps to escape some demons, is ordained a priest at the age of 23. He hides his cards well and never declares his ambition. He is taciturn. And, indeed, a Montgolfiere of vanity. He likes to roam the countryside, especially in Latin America, where he holds his top positions and has many friends. He was discovered by Pope Paul VI, when, back in Rome, he was in charge of the communist countries in the Secretariat of State, and he was appointed nuncio to Chile in 1977. He would remain there for 10 years, from March 1978 to May 1988.

Chile is the launching pad for Angelo Sodano’s career and its abrupt descent. He becomes a Machiavellian archbishop for whom the end always justifies the means. Was he on the extreme right before his time in Santiago de Chile? All the witnesses deny it. But in contact with the dictator Pinochet, who has just prevailed after a bloody coup d’état, he learns both his ideas and his methods and becomes his main thurifer. The witnesses do not hesitate to describe the relationship between Pinochet and Sodano as a “fusional friendship.” It has been said that Pinochet “held him back” and that his secret agents, who established a very personal relationship with the nuncio, made him “sing”. Let’s say more simply that Angelo Sodano was old enough to sing alone.

What remains particularly enigmatic is Sodano’s unusual closeness to four Pinochet advisers and agents, all gay. It is not well known, but the dictator had his gay mafia, hidden advisers or plainclothes soldiers from among the highest ranking of the dictatorship, who informed him in detail. Sodano was the center of gravity of this little network and the friend of those four liaison officers. This homosexual network of Pinochet has never been described: Chileans were very surprised when I revealed it based on the testimonies of repentant Pinochetists, Chilean archives and declassified US State Department documents to which I had access.

In the 1980s, then, Sodano lives like a prince in Santiago de Chile: he leads a great lifestyle under his police escort, between luxury and political lust. In Chile, the nuncio approaches the extreme right-wing currents and begins to fight against the radical Catholic left, in particular against liberation theologians, such as Gustavo Gutiérrez, Óscar Romero, Leonardo Boff and Frei Betto. Sodano turns a blind eye when the Pinochet dictatorship arrests priests accused of subversive activities; from Rome, he would later orchestrate the marginalization of all leftist bishops in Spain and Latin America.

In Santiago de Chile, Sodano was especially close to Pinochet’s official priest, a certain Fernando Karadima, and to the parish of El Bosquet. Are you aware of the moral customs, the sexual assaults of which this church is the scene? It is impossible for him not to be informed, especially since he spends his free time there, in a special room called “the nuncio’s room”. By effectively supervising John Paul II’s trip to Chile in April 1987, Sodano wins over the sovereign pontiff despite the fact that the unnatural embrace between the human rights pope and the dictator in the symbolic tribune of the La Moneda presidential palace was a scandal, Sodano achieves his goal. The following year he is appointed Minister of Foreign Affairs of the Pope in the Vatican and a year later Secretary of State, that is, his prime minister.

Today there are trials in Chile, Mexico, Colombia and dozens of countries in which the name of Angelo Sodano appears. The cardinal would have protected the most famous pedophile priests, be it Marcial Maciel and his Legionaries of Christ in Mexico, Fernando Karadima in Chile, but also Cardinals Alfonso López Trujillo in Colombia, Groër in Austria or McCarrick in the United States. The reports against him are innumerable. Cardinal Christoph Schönborn demanded his resignation and even Benedict XVI chose to distance himself from Sodano in 2006, for which he took revenge for several years with an ugly campaign of slander against this pope too weak to govern.

We can consider that Sodano is the main actor in the resignation of Benedict XVI who, in turn, denounced the gay lobby of which he would have been a victim. More recently, in 2019, Pope Francis prudently removed Cardinal Sodano from any official position, citing his advanced age as a pretext, but actually choosing to remove a man whose past was blacker than his cassock.

How to explain this dizzying rise and the life of this “black” eminence who became the protector of most cases of pederasty and sexual abuse in the Church and had long smelled of “singing”? Four elements allow a principle of explanation. First, the fight against communism. In Chile, as in Latin America or Spain, Sodano was the main actor in the purge of the Church against the communists. The Legionaries of Christ, Marcial Maciel, Karadima or López Trujillo were Sodano’s soldiers on the ground in this vast anti-communist enterprise. Their morals or their abuses counted for little compared to the great political stake for which they worked tirelessly. Then there is the money. Today we know that Marcial Maciel, but also Karadima and Pinochet, helped Rome financially to fight against communism. It is estimated that several billion dollars were transferred from Latin America to the dissident vanguard in East Germany or to the coffers that fed the Solidarity resistance in Poland. 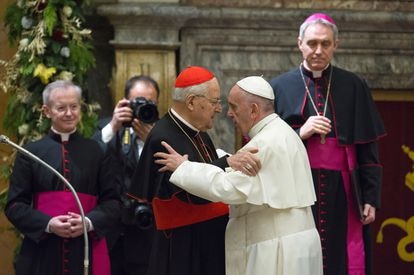 Angelo Sodano with Pope Francis at the Vatican in 2017. Vatican Pool (Getty Images)

There is also the culture of the secret of the Church. Be that as it may, the secret life of prelates and cardinals had to be hidden to protect the system. That is why Angelo Sodano protected pedophile priests, not so much because he supported pedophilia itself —which does not seem to be the case— but for reasons of state. In addition, Angelo Sodano was always transparent about his fundamental principle, taken from the famous epigraph that appears in Raphael’s stays in the Vatican: Dei non hominum est episcopos iudicare (in Spanish, judging bishops corresponds to God, not men) . That is why sexual abuse cases are extremely difficult to understand and judge.

In Chile, Mexico, the United States, Colombia or Argentina investigations have been opened or will be opened, and special commissions or tribunals have been created. In France, the Sauvé commission, officially created by the Church, has published a 2,000-page report accusing 3,000 priests or religious of sexually abusing more than 330,000 victims. Several French cardinals and bishops have resigned and countless priests and bishops are in the eye of the storm. A similar commission is being created in Spain and could be inspired by the French CIASE since there are dozens of little Sodanos among the Spanish cardinals and bishops of recent decades.

This dark past of the Spanish Church, this opaque history so closely linked to Francoism, as Chile’s was to Pinochet, deserves to be finally revealed. Spain is only at the beginning of a very long way of the cross. The death of Angelo Sodano, a demonic figure in the Catholic Church, could be the architect and the driving force behind these new pages to be written, and these trials yet to begin. And all the more so since it confirms Oscar Wilde’s famous formula, taken up again in House of Cards: “Everything in the world is sex; except sex. Sex is about power.”

Frédéric Martel is an international researcher, a journalist for Radio France in Paris, and a professor at the ZHdK University of Zurich. He is the author of a dozen books, including Sodoma (Roca, 2019), about gay life in the Vatican, considered a bestseller by The New York Times and translated into more than 20 languages.

An analysis of climate denialism in the Spanish media

“Essential” drugs in danger of extinction: when the industry loses interest in a strategic drug

This is not a seagull: it is the most endangered seabird in Europe and it only breeds in the Balearic Islands

More than half of young women have had sex without desire

Virus hunter training: hunt down and kill Trojans with Desinfec't 2022