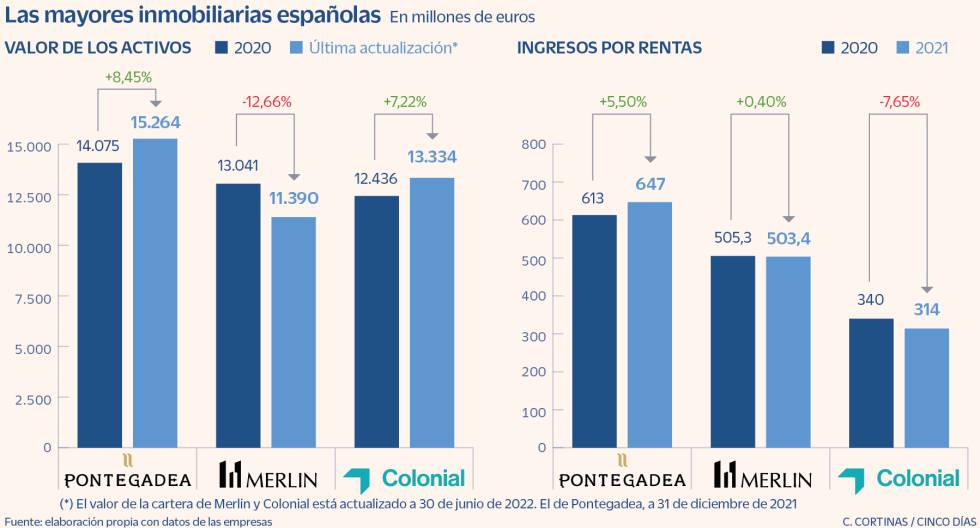 Pontegadea, the real estate company of the founder of Inditex Amancio Ortega, has been reinforced as the largest Spanish property company. The company fattened its portfolio last year to 15,264 million euros in value of its assets (8.4% more year-on-year) and obtained rental income of 647 million (5.5% more), according to the data presented by the company last week. It leaves behind the Socimis Merlin Properties and Colonial.

The 15,264 million euros represent a record number of properties in the hands of Ortega. The portfolio appreciated again after the previous year, for the first time and due to the Covid-19 pandemic and Brexit, his appraisal was lower. It is precisely the revaluation that has driven this portfolio, more than the acquisitions, since the family office of the largest shareholder of Inditex did not make large purchases in 2021.

However, in 2022 Ortega has made a strong commitment to real estate, so it is expected that the appraisal for 2022 could be much higher. A few weeks ago it became known that he had acquired a luxury apartment building for rent in New York for 500 million. It is 19 Dutch in Manhattan, a 64-story tower with 483 apartments.

In January, Ortega also carried out his largest transaction, that of Royal Bank Plaza, a property located in downtown Toronto (Canada), for some 1,150 million Canadian dollars (just over 800 million euros at the time).

The Galician businessman, with a fortune of 57,500 million dollars according to Forbes, invests a large part of the dividends from Inditex in the purchase of relevant and well-located buildings around the world. Its big markets are the US (and Canada after the purchase of Royal Bank Plaza), the UK and Spain. The income of this real estate company comes from rental income from offices, hotels or shops, mainly.

Its portfolio has left behind in value in the comparison with the two large socimis (listed investment companies in the real estate market), Colonial and Merlin. In the last update of the appraisal of its portfolio, Merlin announced last week that until June it had properties for 11,390 million, 12% less, due to the recent sale of 659 bank offices and two buildings to BBVA for 1,987 million.

In rental income, last year Merlin was the largest of the socimis, with 505 million. In the first semester, 222.6 million was pocketed in this concept (8.3% more after deducting the rents of the BBVA offices).

Thanks to the sale of the branches to the bank chaired by Carlos Torres, Merlin has reduced its debt by 2,068 million. Now, the real estate company is betting on investing in data centers as a new business to promote and has already begun to build the first of these infrastructures in Vitoria, it hopes to start this August in Madrid and Barcelona. Currently, more than half of its properties are offices, followed by the activity of shopping centers and logistics. This company has almost all its properties in Spain and a small part in Portugal.

After the transaction of the BBVA offices, Merlin has been overtaken by Colonial, which has increased the value of its portfolio by 7.2%, to 13,334 million. In this case, the Catalan company has entered 170 million in income in the first half (9% more), as reported last week.

Colonial focuses its business on offices in Madrid, Barcelona and Paris, in this case through its French subsidiary SFL, which has invested 4,900 million in the Paris office market.

This is dishabiliophobia, the fear of undressing