Penelope Cruz: “I can’t give up seeing the world through the eyes of a girl”

A very excited and almost overwhelmed Penélope Cruz (Alcobendas, Madrid, 48 years old) has received the National Cinematography Award this Saturday in San Sebastián, within the Donostiarra festival. “I didn’t want to forget anyone, because there have been many who have accompanied me throughout that career”, she recounted after the act. “Starting with my parents. There was no close artistic reference in my family. There wasn’t even a movie theater nearby, and I watched the movies on a betamax VCR, which my parents bought at my insistence. Thanks to the video club card, my afternoons were coming back from school, doing homework and watching movies, movies and movies”, he recalled with the diploma in hand, an award that is accompanied by an economic amount of 30,000 euros that, he announced, he will divide and will donate to the Mortgage Affected Platform, to the CRIS unit against cancer at the Madrid hospital La Paz and to the Aisge assistance fund for actors in difficulty.

For the Oscar winner, there are details that she received from her acting teachers, Cristina Rota and Juan Carlos Corazza, that she cannot forget: “I cannot give up seeing the world through the eyes of a girl. When you are an interpreter, you are an investigator of life, you must maintain the desire to learn. And look for references: one day you can be Meryl Streep and another, a lady, like the one I saw this morning on the street, who has fascinated me with the way she walks. Half of my free time I spend on the street, studying, almost spying, and there will be people who will think why is that stupid aunt looking at her?

Minutes earlier, in her speech, Cruz had thanked those who accompanied her at the event. “Cinema is and has been my passion since I was a child. Since I dreamed in the living room of my parents’ house with worlds to explore beyond our neighborhood. Those streets sometimes became sets of incredible stories. My childhood was fantasizing about acting, about living life so intensely that it could span many lifetimes through dozens of characters that would widen my heart, my imagination, and my knowledge of the world,” she recalled. For this reason, the first mentioned were his parents, since it was for them that he began his journey to acting classes, and after apologizing because he had many people to remember for his career, he explained that he was going to focus on a few: “A Bigas Luna and Fernando Trueba, with whom I started”. To Pedro Almodóvar, the director with whom she has worked the most times, whom she described: “He takes you to such a level of demand that, in that search, I have always ended up discovering something new about myself.” And Katrina Bayonas, her representative, who did not expel her from her office when she showed up there “for the third time at 15 years old.”

The actress alluded to Cavafy to draw her life journey: “A beautiful poem by Cavafy said that if you are going to travel to Ithaca, try to make the trip long, because the important thing is not to get there, what is really important are the adventures that are lived by the way. And that is so in life, but it is also so in the cinema. It is not the result, it is the incredible adventure of living other lives, knowing other realities, discovering wonderful secrets of the human heart and sharing them with the world. The adventure of this long, long journey to Ithaca is proving to be more exciting than I could have ever dreamed of from the living room of my parents’ house.”

The adventure of this long, long journey to Ithaca is proving to be more exciting than I could have ever dreamed of.”

In his speech he explained that the money from the award, 30,000 euros, will be donated divided into three: for the Platform for People Affected by Mortgages, “an association that has been fighting for more than a decade for those who suffer in their flesh the drama of evictions ”; another third to the CRIS unit for advanced therapies against cancer at the La Paz hospital in Madrid, and to the Aisge assistance fund to help actors in need created by Pilar Bardem. Holding back tears, she ended up thanking her husband, Javier Bardem, her children and the cinema: “Never stop protecting and caring for our cinema, because it is a sign of our identity and an important part of what makes us recognize and understand each other. . And go to the rooms”.

The delivery, made by the Minister of Culture and Sports, Miquel Iceta, was also attended by the First Vice President of the Government and Minister of Economic Affairs, Nadia Calviño. Along with them, colleagues, members of the film industry, festivals and professional associations. Iceta recalled the more than 9,000 kilometers that separate Alcobendas and Los Angeles. “Penelope doesn’t act, she embodies, molds, gives life to her characters. Our retinas never want to stop looking at it. And they are all one, Penelope”, praised Iceta. “Penelope does not forget her roots, she neither wants nor can.” 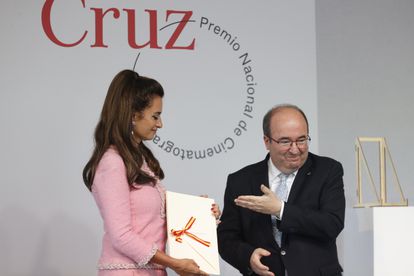 Cruz, after receiving the National Film Award from the Minister of Culture and Sports, Miquel Iceta. Javier Etxezarreta (EFE)

Penélope Cruz’s speech was preceded by eulogies by actors Goya Toledo and Luis Tosar. Toledo recalled that he met her in the summer of 1989, when she arrived in Madrid from the Canary Islands, and that same day he already invited her to sleep at home. Tosar has worked on the two films that Cruz has produced: On the Margins and Mama. “I know the mother, the sister, the daughter, the friend, the partner, the boss, all the Penélopes. And all of them are friendly, supportive, cheerful, firm, revolutionary, empathetic…”, described Tosar, who was grateful to be by her side and “see her shine”. And he underlined: “You are probably not aware of the enormous influence you exert on the cinema of this country, and that is why you receive the largest possible award for a female filmmaker in Spain.”

With the award of the National Film Award, Cruz’s curriculum is completed after having been an Oscar candidate four times —the last one, in the last edition, with Parallel Mothers—, which she won in 2009 with Vicky Cristina Barcelona. She has won the French César de Honor, three Goya awards out of 13 nominations, the Donostia at the San Sebastián festival, the British Bafta, an acting award at Cannes along with the rest of her colleagues from Volver, the Volpi Cup at the Venice competition (it is the first Spanish actress to win it), and an Italian David di Donatello.

Spain line-up in opposition to Costa Rica: Rodri will be the shock

All the advantages you will see that in uncooked greens

iPad, iPhone and AirPods: the place to search out them cheaper this Black Friday

Ancelotti: “I don't know what is happening to Vinicius, for me nothing; he plays with the quality and joy that he has”