Pedro Sánchez: “The Andalusian tax reduction who benefits is Madrid” 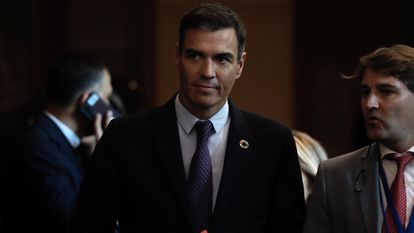 The President of the Government, Pedro Sánchez, this Thursday at the United Nations headquarters in New York.Peter Foley (EFE)

Pedro Sánchez is fully committed to the progressive turn that began in July, in the debate on the state of the nation, and now ends with the new tax on large fortunes that the PSOE had ruled out for several years —in fact, they did not include it in the Government agreement of 2019 with United We Can—and that now seems the great fiscal bet of the Budgets. The president, at the closing press conference of his trip to New York for the UN summit, at the residence of the Spanish ambassador to the United Nations, made a passionate defense of this tax, of which there are still not many details, with the idea that this is an exceptional moment in which it is necessary to delve into “social justice to seek fiscal justice”. The issue of taxes has dominated the press conference, and Sánchez has taken the opportunity both to defend his new tax and to criticize the “downward competition” that several PP communities such as Madrid, Andalusia or Murcia have initiated to see who reduces them plus. Sánchez has defended at all times that with a crisis like the current one, and after a pandemic that has shown how necessary good public health is, it makes no sense to enter this war of tax cuts, much less when those same autonomies “with one hand they lower taxes and with the other they ask for resources from Europe and the General State Administration”.

Sánchez also believes that this controversial decision by Andalusia to suspend the Wealth Tax, which seems made to compete with Madrid, actually benefits the capital, which will always win in that battle for the capital effect. The President of the Government has assured at the end of his trip to the United Nations summit in New York that “the tax reduction of some territories, such as Andalusia and now Murcia, who benefits is Madrid”. “No person with great assets is going to change their tax residence from Madrid to another place. And what is done is to give arguments to a territory that attracts heritage as a capital. These territories should compete with their strengths, betting on education and public health, on quality education, on the energy transition”, the president maintained.

Sánchez has made a call for “fiscal co-responsibility” and has considered that the reductions announced by Andalusia do not make sense in a context in which the central government has made “selective reductions to the middle and working class in the VAT on electricity, gas, to SMEs” and in which new, provisional rates are proposed for large energy and financial companies and now for large fortunes, which is negotiated within the Government by the PSOE and United We Can, and which “obeys the objective to build social justice in our country because we need to build a strong welfare state that protects us from major crises, such as the pandemic.”

The president has criticized the “downward competition” between communities and in which Spain is receiving and will receive European solidarity in the form of 140,000 million euros. And he has encouraged a “reflection of society as a whole” on the model it wants to give itself. “In a legislature in which we have seen how important it is to have quality public health and education (…), these lessons should lead us to consider what welfare state we need and I think it is a strong one”, has developed the socialist leader. “Each one has the duty to contribute according to their effort to finance the welfare state, and it is not only a duty, but an opportunity for everyone”, he insisted, to ensure that the main challenge in Spain is inequality. “Social justice will come hand in hand with tax justice and that is good for everyone because we will all live in a more cohesive society.” “The Government of Spain understands that the main challenge is inequality”, insisted Sánchez, who is launching the ideological battle around taxation and for this he has cited the Swedish social democrat Olof Palme, another great reference of the world left, as the day before he had declared himself heir to the political battles of Chilean Salvador Allende. The interest in the ideological rearmament of Spanish progressivism in an election year and with the polls in favor of the right-wing bloc has been very evident for weeks and has been consolidated in New York.

Asked about the harsh words of the president of Castilla-La Mancha, Emiliano García-Page, who this Monday stated in an interview contrary to the PSOE’s strategy of questioning Feijóo’s solvency, Sánchez sparingly replied that in his 30 years as a socialist militant: “Rarely have you seen as much unity in the party as exists today.”

Before the press conference, Sánchez had held a key meeting with large investment funds. There, as has happened in other years, he had the most difficult exam of all: that of senior executives with interests in Spain. Among the CEOs present, some well-known in the financial world stand out, such as Ray Dalio, from Bridgewater, Daniel Pinto, from JP Morgan, or Henry Kravis, from KKR. But Ares Management, Bank of America, Brookfield, Citybank, Lone Star, Morgan Stanley, Providence, Carlyle, L. Catterton were also represented, and Jaime Malet, from AmCham, the American chamber of commerce in Spain, also attended. In that exam, from which Sánchez left very satisfied because he noted confidence in the Spanish economy, the executives asked him very directly about the central issues on the economic agenda but especially about three that greatly affect their interests: the new taxes on large energy and banking – among these funds there are owners of Spanish companies -, the new housing law and the policy on the real estate market – some have thousands of homes in Spain – and the possibility that the rise in interest rates will complicate the management of public debt and could bring about turbulence like those of the previous crisis, that of 2010.

Sánchez, according to several sources present at the meeting, had his response to these questions very well prepared and has reassured the funds by explaining that in everything that has to do with the legislation on the real estate market – the new housing law is stuck in the Congress because United We Can and ERC claim to go further in limiting rental price increases—Spain guarantees that there will be legal certainty and nothing will be done that is not in line with the European Union. The law is stuck and it is not clear if it will go ahead, but in any case Sánchez reassured investors that this rule will respect all European parameters. The representative of Lone Star, with a huge investment in real estate in Spain, recalled that they had lost a lot of money in Ireland due to an unforeseen change in legislation and asked for legal certainty in this matter.

This time they did not ask him about pensions or the labor reform, like other years -the latter has already been done-, but they were interested in an explanation of the new taxes, although they did not talk about the one of the great fortunes because there are still no details and they didn’t ask Sánchez argued that the situation is exceptional and there must be extraordinary taxes, although the executives complained about these developments. Carlyle, for example, is the main shareholder of CEPSA. The president reassured them with the idea that they are temporary and also guaranteed that they will adapt to what the European Union does, something that always gives confidence to these investors. They also asked him about the Spanish debt now that interest rates are rising, but Sánchez reassured them with the idea that the situation is very different from that of 2011 or 2012, when the risk premium skyrocketed, because now the ECB is determined to support the countries of the South, contrary to what it did for a long time then – until Draghi spoke his words that “we will do whatever it takes” to defend the euro – and because both companies and citizens are much less indebted what then. In general, Sánchez left happy and trusts that the idea that Spain is better prepared than other European countries to withstand this crisis will be installed in the financial world. Sánchez therefore manages this double registry: on the one hand he reinforces his ideological battle and raises taxes on large fortunes and defends social justice, and presents himself as a candidate to preside over the Socialist International, something that has been confirmed in New York, and on the other another speaks the language of investors to convince them to continue putting money in Spain

Pedro Sánchez’s visit to New York to attend the 77th United Nations General Assembly has also materialized this Thursday in a new announcement of 100 million euros for organizations that work on gender equality, including UN-Women. As a feminist government, Sánchez pointed out, “we are especially concerned about the gender gap” and has justified the Spanish decision “in the face of the backward processes that we are witnessing” in several countries, such as “the United States”. “Spain is a leader in the conquest of rights.” Sánchez has not taken a position, because he assured that he still did not know the case well, about the disturbances in Iran due to the death of a young woman who was wearing the veil wrong.

And also on Thursday, Sánchez has announced on his Twitter account that he will present his candidacy to lead the Socialist International. “We are the Social Democrats who have always opted to advance, to conquer new rights and freedoms and we will continue to do so. Together, together, and with renewed strength”, he assured.

The State Attorney General promotes Dolores Delgado, despite the rejection of the majority of the Fiscal Council