Operation save the bear: a team tries to rescue the animal that fought to protect her calf from a male in heat

A wounded bear has taken refuge in the steep caves of the Montaña Palentina, a region of Castilla y León. It moves with ease through cavities with remote access for humans who track it to fulfill a mission: to verify its state of health. Last Sunday a video began to circulate that showed a fight between two brown bear specimens, something common in natural environments but almost unheard of in documentation. One of them was this bear, which appears in the sequence accompanied by a cub. Stranger was the outcome: the male, in heat, ended up dead after falling tens of meters. The female survived the fall, but it is unknown what injuries she suffers and how her offspring, a nursing cub, is doing. An operative of eight people tries to catch her among the caves where she hides.

Claudio Sordo and Carmen Ortega, the hikers who made the video that captures the onslaught of the male and shows the huge fall, are worried about the animals: “We saw that he was following the trail of the bear and we thought he was obsessed with her.” describes the man from Palencia, from Cervera de Pisuerga, a town at the foot of the peaks. Then, he attacked her when he intervened to protect the cub, who fled while, a few meters behind, “the bear preyed on the female.”

“We had never seen anything like this,” recalls Sordo, who claims to have seen peaceful specimens on previous excursions through the region. “We left very sad because the scene left us devastated, we couldn’t do anything, but knowing that the bear is still alive has given us a rush,” says the man, who feared the worst before the virulence of the episode of nature that they contemplated from a distance: “We thought she would be dead from the beating.”

Days pass as specialists grapple with the complexity of the terrain, the danger posed by an injured animal, and time: the bear may not survive unless the extent of her injuries is ascertained. These ursids are a protected species in the Palentina Mountain, in which only six or eight reproductive females live, key to the recovery of this animal, according to official data.

The Junta de Castilla y León, after observing these lands from a distance with a telescope and special lenses, has confirmed that the female is still alive, although there is still no way to know her state of health. The gallery where she has sheltered is more than 15 meters long, with narrowing of less than 80 centimeters and multiple narrow vertical wells. The deployed human team has placed a camera in the mouth of the bear to try to discover how the animal is and if it is accompanied, as is believed, by the calf, born this winter and still in need of the mother to function. For now, they have placed fruit, fodder and water at various points in that cavity to promote the subsistence of the two bears.

One of those responsible for coordinating the device, David Cubero, chief technician of the Natural Spaces Service of the regional Environment area, explains that the work consists of “providing maximum security and prioritizing distance”. The first moments of the deployment involved a figure of more than 20 troops between veterinarians, environmental agents and civil guards, a number that has been reduced to the current eight, while relying on the telescopes and the camera to obtain news. 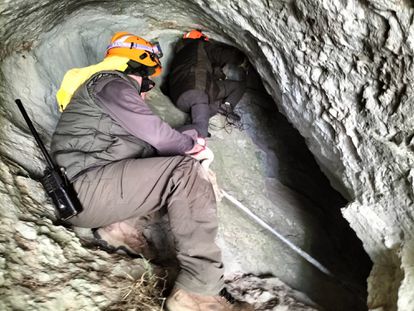 Operators of the Junta de Castilla y León, during the search for the bear.EFE

“They are relatively normal episodes in spring, but the tragic outcome is not so frequent,” says the expert, who believes “it is extraordinary to document the fall”, as it has happened. The males, he adds, try to “induce the females into heat, which go with those calves born in January, and which usually accompany the mother until they are 15 months old.” Thus, the bears promote these “infanticides” by trying to distance the mothers from their young, which they even kill so that the females start a new reproductive cycle. This happened in this eastern part of the Cantabrian coast, but the female resisted and a fight broke out that ended with the dead male after both animals fell into the void. The dead specimen, weighing more than 200 kilos, has been recovered and the traces of blood and other signs made it possible to locate the area where the survivor is moving. A place where rescue workers must hold onto ropes and move with caution.

“An injured bear with a cub is dangerous”

The situation of the injured bear, highlights Guillermo Palomero, president of the Brown Bear Foundation, marks the roadmap to be followed, day by day, by the rescuers. “Bears are not aggressive until they feel threatened. A bear that is injured and has a baby is dangerous. It is not a joke, safety must prevail, ”warns the naturalist, who reports that this specimen lived in a limestone rock with caves with another bear and her bear cub, who watched that deadly fight “with tension”.

Now, those lands are fenced off so that hikers, cyclists and photographers like those who captured the scene are not at risk. The expert insists that, after locating the injured specimen, it is necessary to gauge the severity of its injuries, although these plantigrades “are tough and sometimes endure with a very injured leg.” The danger is that it suffers internal damage that compromises the well-being of a highly prized bear in this area north of Palencia. “Everything possible must be done not to lose it,” he warns, and specifies that if the mammal needs to be moved, it will probably take the cub with it to continue suckling. If orphaned, the animal would be referred to a center specialized in its growth so that it develops its ability to hunt, search for food and survive with minimal human contact so that it does not get used to it.

A mom denounces homophobic insults to her daughter at a faculty in Madrid: “Her tutor instructed us that we’ve got to respect the opinion of others”

Isabelle Lonvis-Rome: “To deal with gender violence effectively, we should repeat that it isn’t just like the others”