“Whoa dad, he’s awful!” Children sometimes judge what they see spontaneously and open-heartedly. In this case, however, it was not the Astra itself that was meant, whose angular design was well received by the youth jury, but the color of the test car in urine stone metallic, which Opel bravely markets as “cult yellow”. There was further criticism from the offspring only for the lack of reading lights in the back. What did the drivers notice? That small things in cars sometimes make a big difference on an equal footing.

Strengths and weaknesses of the base

The Opel Astra PHEV was the third model on this platform that we had in the editorial office within a short time. It has strengths and weaknesses in common with the Peugeot 308 and DS 4: some competitors do a better job of using the traffic area, and the Astra isn’t particularly spacious at the back either. The miserable access for the Isofix hooks for attaching child seats is also a problem in the Opel. Who would ever think of hiding these hangers behind sluggish mini zippers? Where are the cost-cutters when they could do something good for the customer?

Lots of space in the trunk

With a combustion engine alone, the Astra is one of the models in its class that offers a comparatively large amount of space in the trunk. The work calls 422 liters, in the plug-in hybrid there are only 352. If you need more space, you can use the station wagon, which has 516 liters to offer as a hybrid. It will also be available as an electric car from 2023. 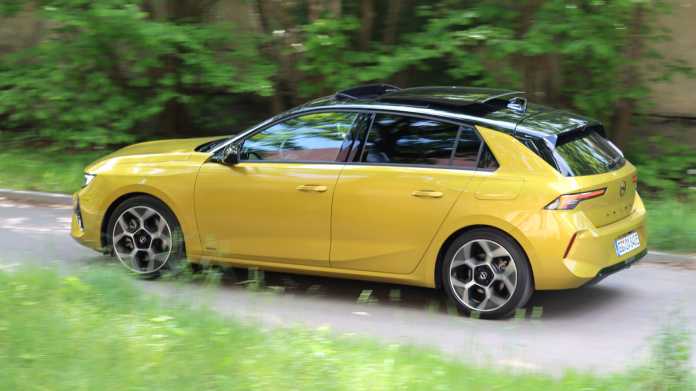 The sixth Opel Astra looks nothing like its predecessor.
(Image: Florian Pillau)

On the plus side, the overall very good workmanship and the exceptionally comfortable seats are striking. In the test car, they could even be ventilated, although this was a bit loud at the highest level. All drivers found the massage with a total of nine programs very pleasant. The armchairs, together with the improved insulation compared to the predecessor, contribute a lot to the increased ride comfort.

The manufacturers follow a different philosophy when it comes to tuning the chassis. The DS 4 is trimmed for comfort, the 308 as a hybrid is only available with a sporty line. During the test laps with a pre-series model last year, it was noticeable that Opel had also decided to dampen the Astra tighter. In the series model that is now driven, it pleases with a tight but not quite as uncompromisingly hard design.

It remains far removed from the comfort of the DS 4, but, unlike in the 308, there are more than just remnants of suspension comfort recognizable. Three cars on one basis, three different setups – here, among other things, it becomes clear that the result does not have to be the same. Unfortunately, all three are the same when it comes to braking, which is a complete failure. The pressure point is hard to feel, my colleague Florian described the brake feel as “cuddly”.

Of course, the infotainment systems are also built on a basis. This can be recognized by the layout, the components of which can be set up variably within certain limits on the main screens. In this way, the driver can determine which functions he would like to have quick access to. Once this has been set up, it mitigates the unfortunate fact that there are no freely assignable favorites buttons – unlike in the Peugeot 308. Why hardly any manufacturer offers such shortcuts through the thicket of modern infotainment systems is certainly beyond my understanding. After all: things like seat heating, volume and temperature have fixed buttons.

With the new generation of the Astra, voice control has taken a noticeable step in the right direction. Even with the sunroof open, it understood the command: “Drive me home!” However, the Stellantis Group currently does not reach the level that Mercedes has been presenting for years in the comparably large A-Class for an excessive surcharge. The radio sound was also unusually dull. It’s a shame that the hi-fi system doesn’t even exist for two equipment lines. 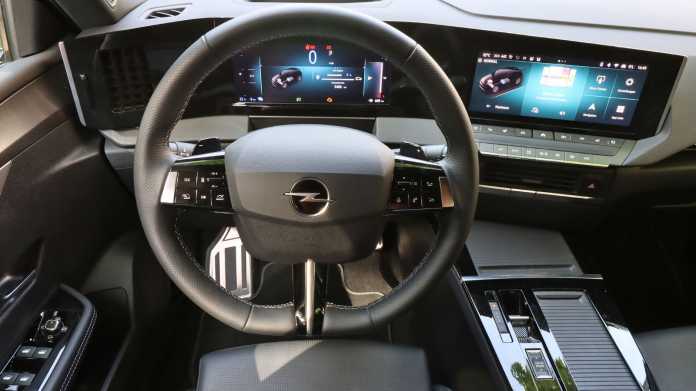 The angular line is also continued in the interior. We liked the fact that Opel dispensed with wiping surfaces on the steering wheel.
(Image: Florian Pillau)

We also noticed a few bugs, including the head-up display. It was obviously misadjusted in the test car, because regardless of the seating position, the only way to bring anything into view was to set it all the way up, which made it uncomfortably distorted and out of focus. Sometimes it simply went off after the car started and then had to be laboriously reactivated from the depths of the system. This process could have been made easier for newcomers if the programmers hadn’t hidden it under the “Brightness” sub-menu. It cannot be controlled by voice command.

Some drivers found the sound of the turn signal strangely synthetic, which once got out of sync with the display. Little things like the ones mentioned can be fixed with updates if the manufacturer wants it. Voice control can also be improved later in this way.

Sparse but easy to read display

Overall, the instrument cluster in the Astra is also a bit sparse. Although it can also be set up a little according to the wishes of the driver, the presentation remains simple. No comparison to the Peugeot with its complex 3D displays. However, Opel has managed to make the screens anti-reflective comparatively well. Even in sunlight, everything can be read properly. Hopefully, by the time of the next facelift at the latest, there will be someone who will take care of the border of the head-up display, which is highly reflective in sunlight.

Greater than 1,000 folks within the Nordic Strolling March for Equality

The Mercadona glitter that is causing a sensation: It is selling like hot cakes!