One person has died and another 40 have been injured of varying degrees this morning during the celebration of the Medusa Festival in Cullera (Valencia) after the fall of various structures and parts of the main stage and the entrance to the venue due to strong gusts of wind, as reported by Emergencies 112. The deceased is a 22-year-old man who has been hit by part of the stage. Among the injured there are at least 3 with serious polytrauma and another 14 people with minor contusions. The organization has decided, at noon this Saturday, to definitively cancel the festival, according to its sources. In fact, many young people have already begun to leave the facilities. The Generalitat, through 112, has set up an information telephone number for relatives and those affected by the incident: it is 900 365 112.

The head of court number 4 of Sueca, on duty, has opened proceedings for the death of the boy and has commissioned the investigation of what happened to the Civil Guard, to determine the circumstances in which the incident occurred. At the moment, judicial police officers have already carried out a visual inspection of the place and have sealed the elements affected by the gale.

The mayor of Cullera, Jordi Mayor, has stated that the organization had all the permits and all the administrative guarantees required by law and the City Council has decreed two days of official mourning and has suspended all institutional activities.

The Fallas artist and creator of the Medusa stage, Manolo García, has recounted how “in three minutes of madness, everything has happened”. “This had never been seen before,” said García, who was on the premises and who has ensured that the stage complied with safety regulations. In statements to the SER, he stressed that the stage was a “stable” structure with 60 tons of counterweight. In addition, he has specified that the scenery “has not harmed anyone” since what has caused the fatality and the injuries has been the aluminum structure because “the wind has overturned even the counterweights it carried”. “It was a kind of tornado and you couldn’t stand the heat,” he pointed out.

The festival has issued a statement stating that safety has always been an “absolute priority for us”. “We believe that all of you who know us know that the main thing is to protect all of you in each of our events,” he points out in the letter that also explains that the forecasts are that adverse weather conditions continue. “It is a day of mourning. And respect for those affected. We want to accompany you in the duel. And they will have us for everything they need. His unbearable suffering we also make ours. Once again, we express our deep and sincere condolences”, indicates the organization.

In the early afternoon of this Saturday, the organization has begun to evict the attendees who were still in the campsite to prevent them from spending the night on the premises when the forecast is that other adverse weather events could occur. The young people are being led to the local pavilion.

The eviction of the nearly 50,000 people who were on the premises at the time of the incident took place in just 40 minutes, according to the Civil Guard. Sueca’s chief captain, José Vicente Ruiz García, has assured that the emergency exits were open.

Sources from the Ministry of Health have reported that a total of 32 people have been treated in the hospitals of Gandia, Alzira, La Fe and Clínico, the latter two in the Valencian capital. Of these, five remain hospitalized, one of them with a reserved prognosis with a spinal column fracture and the other four with various fractures. The rest have already been discharged.

The Medusa Festival, which expected to gather some 320,000 people until Monday, began its official electronic music program on Friday. During the afternoon, the organization already suspended the use of pyrotechnics that it had planned due to the general prohibition of its use in any space where it could cause fires, due to the intense heat that was expected.

The events occurred around four in the morning, when strong gusts of wind caused several structures to fall, including the large sign at the main entrance, and parts of the stages, some of which fell onto the public. Some of the attendees have described feeling like a “sandstorm”, “burning air” or “like black smoke”, and seeing various structures fall on people.

Around 3:30 a.m., at least on the Rainbow stage, where I was with my friends, a slight wind begins to reach us, somewhat annoying. It didn’t seem like anything to worry about. Around 3:45 a.m., the DJ @YoAlexMartini stops your session. We didn’t understand why.

According to the State Meteorological Agency (Aemet), during this morning there have been “warm blowouts” with very strong gusts of wind that can exceed 80 kilometers per hour and sudden rises in temperature. The agency has reported this Saturday morning that “violent phenomena with very strong gusts of wind or blowouts” such as those recorded last night can be repeated during the day. In any case, the Aemet has also explained that in cases such as those of this morning, “the place that will be affected and time cannot be predicted exactly, but it can be pointed out, which is not a little, susceptible areas so that produce these phenomena.

Tonight there have been warm blowouts with very strong gusts of wind and a sudden rise in temperature. They have probably been convective outbursts (not caused by gravitational waves as we had initially said). https://t.co/IIM0h8PRi7

The president of the Generalitat, Ximo Puig, has sent his condolences to the family and friends of the deceased man, and has lamented the “terrible accident” that, as he has written on his Twitter account, “it shocks us all”. Likewise, Puig has indicated that he is following “carefully” the evolution of the wounded. The mayor of the town, Jordi Mayor, has been “desolate” and has sent his condolences to the relatives of the victim. 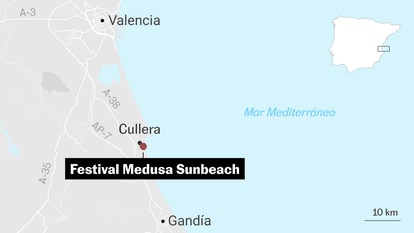 Ancelotti: "I know perfectly well that one day this could end"