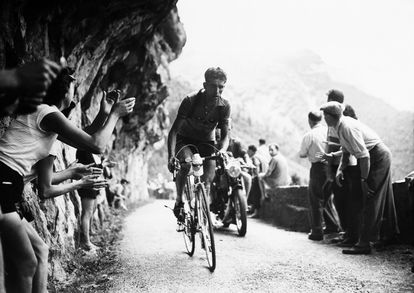 Federico Martín Bahamontes is turning 94 years old and during the crossing of the Jurassic mountains that separate and unite France from the Swiss lakes in the East, the Tour celebrates him. From Radio Tour, the person in charge of the communication of the race reminds the entire caravan and applauds the six reigns of the mountain of the Eagle of Toledo and his final victory in the Tour of 59. San Federico, the crazy, the stubborn, a Pogacar perhaps because he insisted on capricious and fanciful ideas, if only for the pleasure of proving that he was always right, he is the dean of Tour winners. The second oldest among the living is the Dutchman Jan Janssen, who has just turned 82, 12 years younger. Lucien Aimar, the Frenchman from the Côte d’Azur who won the 1966 Tour, is 81, and the fourth oldest, at the foot of this podium, is Eddy Merckx, 77 years old in June.

But only Ferdi Kübler, the crazy Swiss winner of the Tour of 51 and died at the age of 97, can rival Bahamontes in longevity, admitted to a health center in Valladolid for months. They are the only two Tour winners who have been over 90 years old. And only four others, Maurice Garin, the first winner, in 1903, Lucien Buysse, Roger Lapébie and Gino Bartali, reached more than 85.

Another Spanish cyclist who distinguished himself on the Tour, Bernardo Ruiz, El Pipa, from Orihuela, turned 97 in January. He was third in the Tour 70 years ago, behind Fausto Coppi and Stan Ockers, and in the mythical Télégraphe photo in which Coppi and his Italian archrival Gino Bartali pass a can of water, there, to his wheel, the shadow of the robust Spanish cyclist, still lucid, is intuited. In the 1951 Tour he won two stages. He ran at La Perle, and his merino and silk jerseys, with Darrigade and Anquetil and at Faema with Van Looy. And his age, his 97 years, has also been met by Raphaël Geminiani, who became more famous as director of Anquetil and Julio Jiménez than as a cyclist. From the same fifth of his, from 1925, although he will be 97 in December, he is the oldest living wearer of the yellow jersey, Frenchman Jacques Marinelli. More than 100 years have already passed, on July 19, in 10 days, it will be 102, another Frenchman, Émile Idée, winner of a stage in the 1949 Tour, Coppi’s first. No stage winner older than him.

Their long lives confirm the thesis advanced ten years ago in the study by physiologists from the University of Valencia José Viña and Fabián Sanchís Gomar, that being a Tour runner is synonymous with longevity and quality of life. The researchers carried out a demographic analysis comparing the life and death of 834 French, Belgian and Italian runners born between 1892 and 1942 and who finished at least one Tour between 1930 and 1964, with that of the rest of the population of those countries. The result is sharp. While the survival rate of the general population is 50% at 73.5 years, almost 70% of Tour participants were still alive at that age, and the 50% rate was reached at 81.5 years , which means, according to the authors, a 17% increase in average longevity.

“Perhaps because of all the negative news associated with doping, the general belief was that the Tour was bad for your health, but we have measured what Tour riders live between 1930 and 1964. The curve shows that Tour riders live more than the general population. This study, published in the International Journal of Sport Medicine, breaks the paradigm”, Professor José Viña explained in EL PAÍS.

One of the reasons for this longevity is advanced by the European University physiologist Alejandro Lucía. “In the Paleolithic our genetic footprint was modeled, and cyclists, who are exaggerated, thousands of years later not only maintain it, but have corrected it to increase it,” explains Lucía. “During a stage of the Tour, a cyclist can expend up to 6,000 or 8,000 calories. No matter how much he eats, it is very difficult, of course, for him to recover what he spent, so they finish the Tour on the bone”. Very thin and very healthy, like Bahamontes, who, until the pandemic broke his routines in 2020, and had already turned 91, led a full and active life.