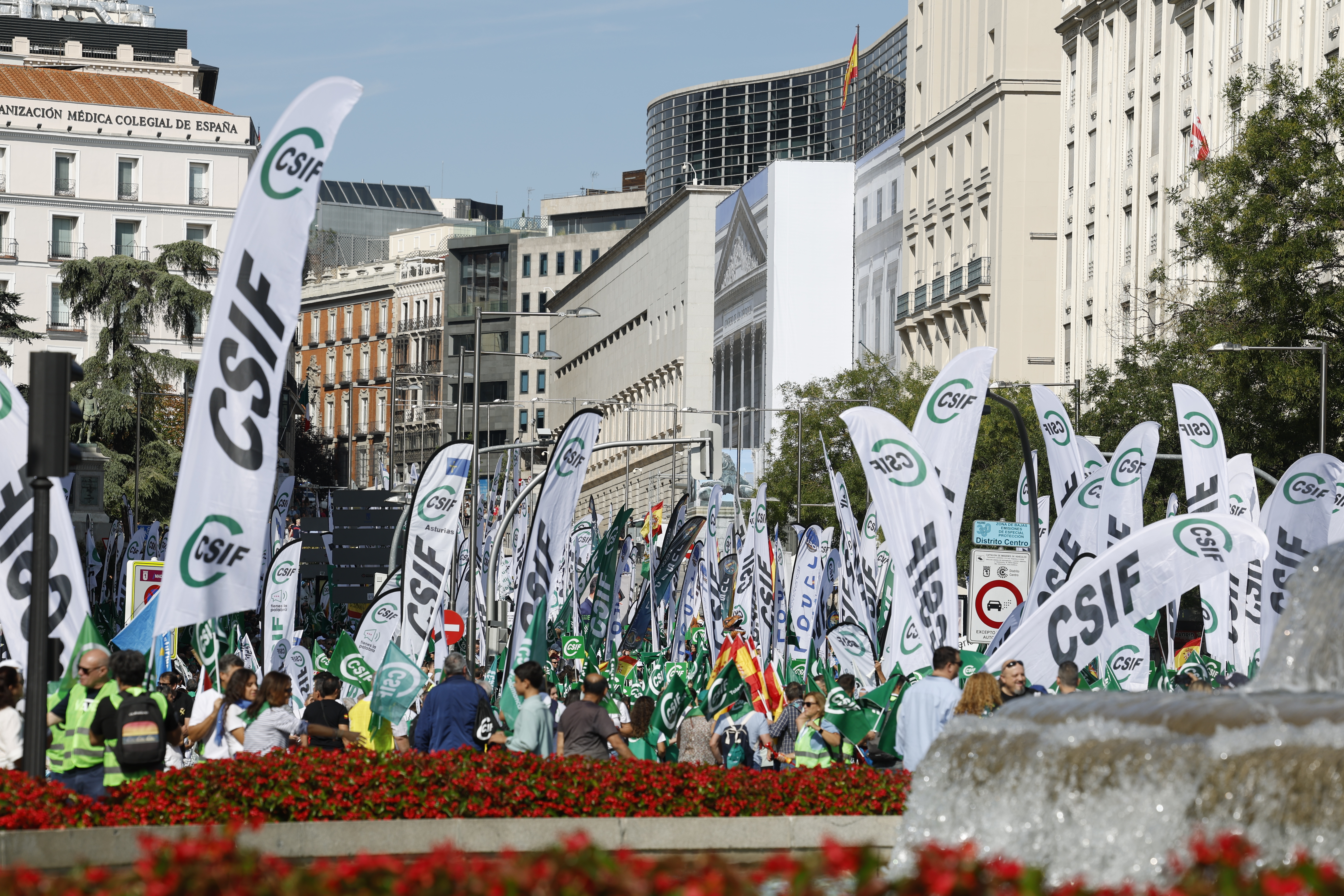 Several thousand people – some 70,000, according to the organizers, thanks to the arrival of 250 buses – are marching through Madrid this Saturday, summoned by the Central Independent Trade Union and Officials (CSIF), to demand salary improvements. They do so despite the fact that this Friday the Ministry of Finance summoned the plants to a meeting for next week to “address the improvement of the working conditions of public employees in the current economic situation.” The concentration, which began in the Congress of Deputies and has moved to Colón, has been joined by the Jusapol police union. The groups demand a retroactive update of salaries to compensate for the loss of purchasing power caused by inflation (which stood at 10.5% in August). According to the CSIF, this decrease in purchasing power could be 20% since 2010, when the Government of José Luis Rodríguez Zapatero lowered the salaries of public workers.

The police device has prevented the participants from climbing the Carrera de San Jerónimo and has established a cordon at the height of the Plaza de Colón. Under slogans addressed to the Minister of Finance, María Jesús Montero, such as “Minister Montero, where is the money?”, the protesters have walked the Paseo del Prado, mixing at times with tourists and passers-by. “What has happened today is evidence that the government is losing support in the street, and very soon it will pay for it at the polls,” declared the president of the CSIF, Miguel Borra.

To the general complaints of the civil servants of the State administration has been added a recurring demand of the police unions: salary equality between the State Security Forces and Bodies and the local and regional police. Among the protesters who wear the white and green colors of the CSIF, the members of the Police and the Civil Guard stand out, with Jusapol union t-shirts and Spanish flags. Aurora Pozuelo, a member of the union, describes the salary difference with the local police or the Ertzaintza as “a comparative offense.” “It has improved a little, so that we settle, but what they promised has not been achieved.”

Borra has addressed the media at the beginning of the concentration. At the foot of the statue of Neptune, under the sun and surrounded by a crowd with white shirts and green flags, he has claimed that they take to the streets “because this government did not want to sit down to negotiate.” “We have already managed to bend his arm,” he declared, referring to the meeting that the unions will hold next Wednesday at the ministry to address the revaluation of salaries.

Collective bargaining will have to be quick: the revaluation of wages must enter the General State Budgets. At the meeting they will propose recovering the purchasing power lost in recent years, “as France has already done with its retirees and pensioners”, declared the union leader. Officials are seeking a deal for 2023 and 2024.

The IMF calls for a fiscal adjustment to Spain of as much as 6,000 million in the course of an election yr

The election of recent European astronauts, with a number of Spanish ESA candidates, stay

Pure catastrophes in Spain had a value of three,600 million euros in 2021

Antonio Garamendi, reelected as president of the CEOE