Offering free dining in all public schools is “reachable and urgent”: it would cost 1,664 million a year, according to the NGO Educo 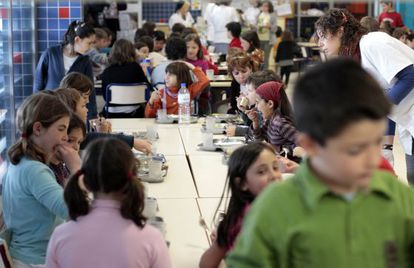 Students from a public school, in the dining room. MÒNICA TORRES

The school cafeteria not only feeds the stomach; also minds and hearts. This is how the NGO Educo defends it, as a basic service for the well-being of boys and girls, not only because their food is guaranteed in the midday space, but because during that time they continue to learn social and nutritional habits, attendance is encouraged to class, relate, play, manage conflicts, families can reconcile and overweight or childhood obesity are prevented. In Spain, however, not all educational centers have a school canteen, nor can everyone who needs access to them. And for the NGO, the solution is to offer free meals to all primary school students in public schools, as they already do in countries like Finland, Sweden and Estonia, and which in Spain would cost, according to their calculations, some 1,664 million euros per year. This public investment would imply increasing the item, currently 191 million in scholarships and aid, by 1,472 million per course. Pilar Orenes, general director of this NGO that focuses its work on children and education, declared, during the presentation this Thursday of the report Universal and free school canteen: an achievable and urgent objective: “Although the figure is important, it only means 0.13% of Spanish GDP. It’s bearable.”

“The universal and free school canteen, for us an achievable and urgent goal, is far from being a reality,” Orenes said. In the current scenario, the dining room reaches 36% of the student body (716,000 primary school boys and girls). This represents a total cost of 576 million euros per school year which, subtracting the 191 million from public aid and another small part of scholarships from private entities, are assumed by families. “When the public administrations do not cover the entire cost, it is very difficult to talk about rights”, Orenes protested.

Educo admits that they have used a very simple method to calculate their estimate —they have taken the number of primary school students in the public school and multiplied it by the maximum price of the school canteen in each community every school day; and, at the state level, they have it on average—, but argues that, due to the lack of official data that allow more detailed calculations, it is a good approximation to show that the universalization of the school canteen is a perfectly viable.

And, until that goal is achieved, the NGO claims to focus on the most vulnerable children. In this sense, Orenes recalled that despite the fact that one in three children under the age of 18 is at risk of poverty or exclusion in Spain, only 11% of students receive any aid or scholarship, a figure that does not cover the entire population that I would need it. The coverage of these grants varies between 0.2% in Extremadura and 25.2% in the Canary Islands, since the regional disparities in access to them are linked to the access income limits established in each region, to the allocated budget to these grants and the model for granting them.

Macarena Céspedes, director of Educo Spain, continued: “Not all boys and girls in this situation are receiving a scholarship. There are approximately one million who, having a very difficult economic situation, do not receive aid”. Consequently, there are 482,000 boys and girls at risk of poverty or exclusion who do not go to the school canteen. If we add them to the 716,000 who attend, a total of 1.2 million male and female students would attend. In this case, the cost for the Governments would be 983 million euros: to the 191 million that they already invest, they would have to add another 792 million euros.

Céspedes has focused, above all, on the differences between autonomous communities. In Spain, only 72% of public primary education centers have a school canteen, a percentage that varies significantly between regions. Thus, the Basque Country, the Community of Madrid and the Valencian Community offer the service in 100, 98 and 94 percent of the public centers in the region. At the extreme with the lowest coverage are Extremadura (51%), Castilla-La Mancha (58%) and Murcia (60%).

This coverage, “insufficient” for Educo, is combined with uneven assistance in the regions. While in the Valencian Community and the Basque Country, 60% and 78% of students enrolled in public primary schools use the school canteen, in the regions of Catalonia, Murcia, Extremadura and Castilla-La Mancha these percentages are reduced less than half: 9%, 16%, 21% and 23%, respectively. On average, only 36% of students use the canteen service in Spain. “One of the significant factors is the cost of the school canteen, whose average price is 4.6 euros,” Céspedes insisted. It ranges between 3.5 and 6.5, with the Balearic Islands, Catalonia and Navarra being the most expensive places.

To make the calculation, they have not taken into account other expenses that could be generated by the extension of this coverage, such as the construction of spaces. “There are alternatives that are not building infrastructure. You can, for example, share dining rooms between schools”, Céspedes clarified.

What does Educo ask for?

In 2013, Educo began its Educo Comedor Scholarships project, whose objective is to ensure at least one nutritious and complete meal a day for boys and girls who need it both at school and during summer vacations. In addition, the program also has an educational part so that they continue learning at noon during the school year and in camps and leisure activities in the summer months. After 9 years, the entity has awarded more than 52,000 scholarships and has provided more than 4.3 million meals. “Are we going to continue giving dining room scholarships? Yes. But if we want long-term and sustainable changes, we need political commitments. The change to improve the life of children depends on a political will”, declared Orenes.

From the NGO, they ask the governments that the school canteen and the midday space are understood and are part of the right to education; that the midday space be integrated into the educational project of the centers; that urgent measures be taken so that all children at risk of poverty can attend the soup kitchen. “In short, that in the future the school canteen be universal and free”, Céspedes concluded.