Odyssey Ark: This is how Samsung imagines a desk with a 55-inch monitor

Samsung dares another push in oversized PC monitors – this time with a 55-inch in 16:9 format. The heart of the Odyssey Ark is a VA panel with a 4K resolution (3840 × 2160 pixels) and mini LED backlighting, which can be controlled in 1056 zones when displaying HDR content.

With a dynamic refresh rate of up to 165 Hertz and a typical response time of one millisecond, the Odyssey Ark is said to be faster than practically all normal Smart TVs. While Samsung no longer produces new curved TVs, the Odyssey Ark is curved at a tight 1000R radius. The display should be able to be used like a normal-sized PC monitor on a desk – we still recommend a high seat distance to avoid risking neck pain.

Graphics cards can dynamically set the refresh rate via Adaptive-Sync. Samsung has AMD certified the Odyssey Ark for Freesync Premium Pro. The mini-LEDs create an area-wide brightness of 600 cd/m² and selective peak values ​​of 2000 cd/m². Samsung puts the contrast at 1,000,000:1. The display covers 95 percent of the DCI-P3 color space.

The Odyssey Ark’s four HDMI 2.1 ports are on a separate box that is connected to the display with a One-Connect cable. There is definitely smart TV technology in this box: Samsung’s Tizen operating system runs on an ARM processor with some memory, including cloud gaming services à la GeForce Now, Xbox or Google Stadia, without a connected PC having to be switched on. There are also the typical streaming apps like Netflix and Amazon Prime Video. A total of six speakers, including two woofers, consume up to 60 watts of electrical power. The Internet connection works wirelessly via Wi-Fi 5 (WLAN 802.11ac). However, the DisplayPorts typical of desktop PCs do not exist. 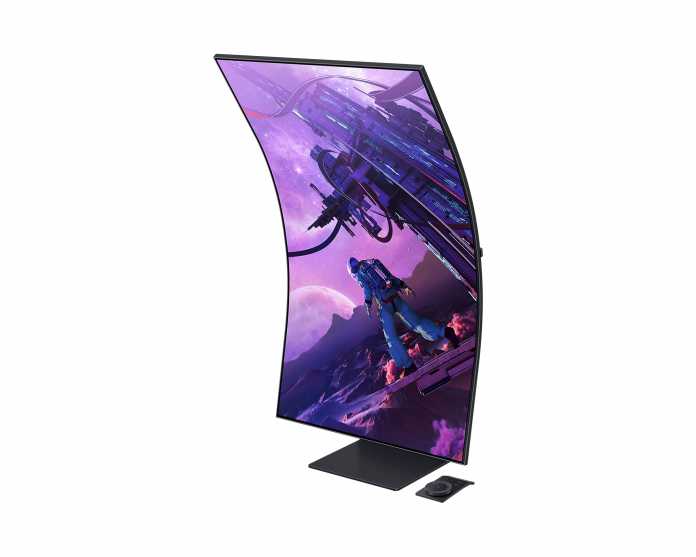 Various display options are useful for displaying desktop surfaces, including the option of dividing the display into up to four virtual screens. The base can be rotated, adjusted in height and tilted. There is even a pivot function, so that the Odyssey Ark can be used upright. The scope of delivery includes two remote controls: one can be used to operate the on-screen display (OSD) in PC mode – as a gimmick it is charged via solar cells – the second contains all the functions of a normal TV remote control.

The Odyssey Ark will be officially released on August 24th for a recommended retail price of 3459 euros. With this, Samsung is charging a whopping surcharge compared to its mini LED televisions, which are available for far less than half. Amazon is already taking pre-orders, but says it will not deliver the display until October. A small shop should already have the Odyssey Ark in stock.

The links marked with are commission links (affiliate links). If an order is placed via such a link, heise online receives a commission. This does not result in any additional costs for the buyer.

Stocihkov regrets not having helped Maradona: "I feel guilty"