Norton Atlas 650 Nomad/Ranger not coming: No new 650 twins under TVS

Ex-Norton owner Stuart Garner had big plans for the Norton motorcycle brand. With a new 650 series two-cylinder and chic new Atlas models, the aim was to enter the volume market, the middle class. Then Norton went bust under Garner’s mismanagement, and in 2020 Indian motorcycle manufacturer TVS took over. At the end of 2020, the Indians continued with the old Garner plans and announced the Atlas models for 2021. Prospective buyers could register on the Norton website and place a pre-order for 500 British pounds.

The deposits are gone

However, the money appears to be gone because, as the current CEO, Dr. Robert Hentschel, reported that the Atlas has now been removed from the production list. According to our colleagues at MCN, Atlas prospects received an email from Norton advising them that “there are no plans to produce the Atlas” and advising them to “file with the Bankruptcy Trustees (BDO) for request a refund of the deposit.” 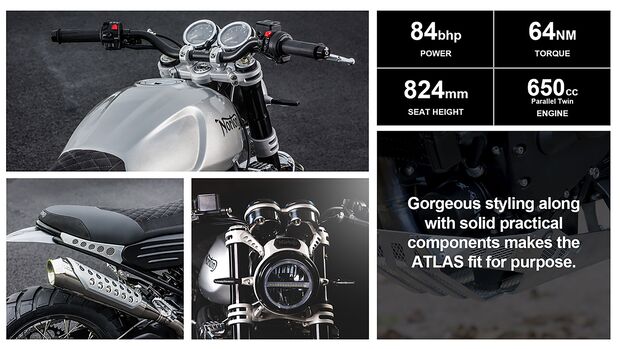 Apparently, TVS is not currently planning to release a budget Norton. The current models are priced in the premium category: V4SV for more than 50,000 euros, the V4CR (exact price still unknown) and the Commando 961 for over 22,000 euros.

That would have been the twin cylinders…

Derived from the V4 engine, the 650 cc in-line twin featured a 270 degree crank pin offset, dual overhead camshafts and a balancer shaft. Bore was specified as 82mm, stroke as 61.5mm and compression as 11.5:1. Injection and a ride-by-wire system were provided. The performance was 84 hp, which should only be present at 11,000 rpm. The maximum torque was 64 Nm.

The two-cylinder should have been embedded in an environment that could have competed as a mixture of enduro and scrambler. The steel perimeter chassis was combined with a cast aluminum swingarm and an upside-down fork. Two versions were planned – Ranger and Nomad – which would have differed slightly technically. 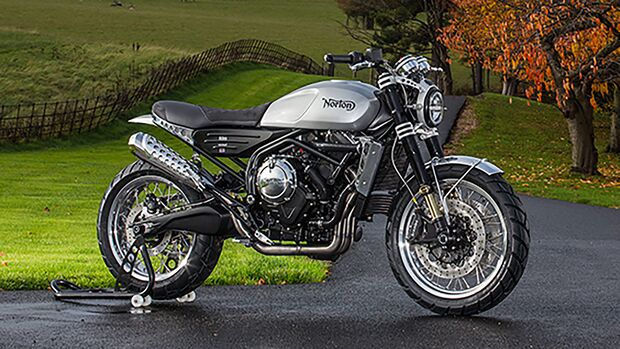 The Nomad comes with a smaller front wheel and shorter suspension travel.

Both would have had in common: the complete LED lighting, the high tubular handlebars and the rear silencer pulled up at the side. At the presentation in 2018, the plans were as follows: 250 copies of each of the two models were to be produced in a first series for 2019. Norton later planned to be able to sell around 2,000 copies a year. The Nomad was priced at 12,000 euros, the Ranger should have started at 14,500 euros. Machines could be pre-ordered for a deposit of £500. Deliveries in England should take place from May 2019. The Euro 4 homologated models for the rest of Europe should follow from December 2019. But then came bankruptcy. With the restart under TVS in 2021, interested parties had hoped for a Euro 5 adjustment. But nothing will come of it now.

TVS gets serious about Norton. Apparently only in the premium segment, because so far only the restart of the Superbike V4 SS has been announced and the prototype of the Norton V4CR has been shown. The mid-range models called Atlas, which many have hoped for, are off the table together with the 650 series two-cylinder.

Suzuki V-Strom 800DE and GSX-8S: Their costs in Italy – MotorBike.gr

The Champions portrays the Tebas league