Nortegas tests the future of hydrogen in Bilbao 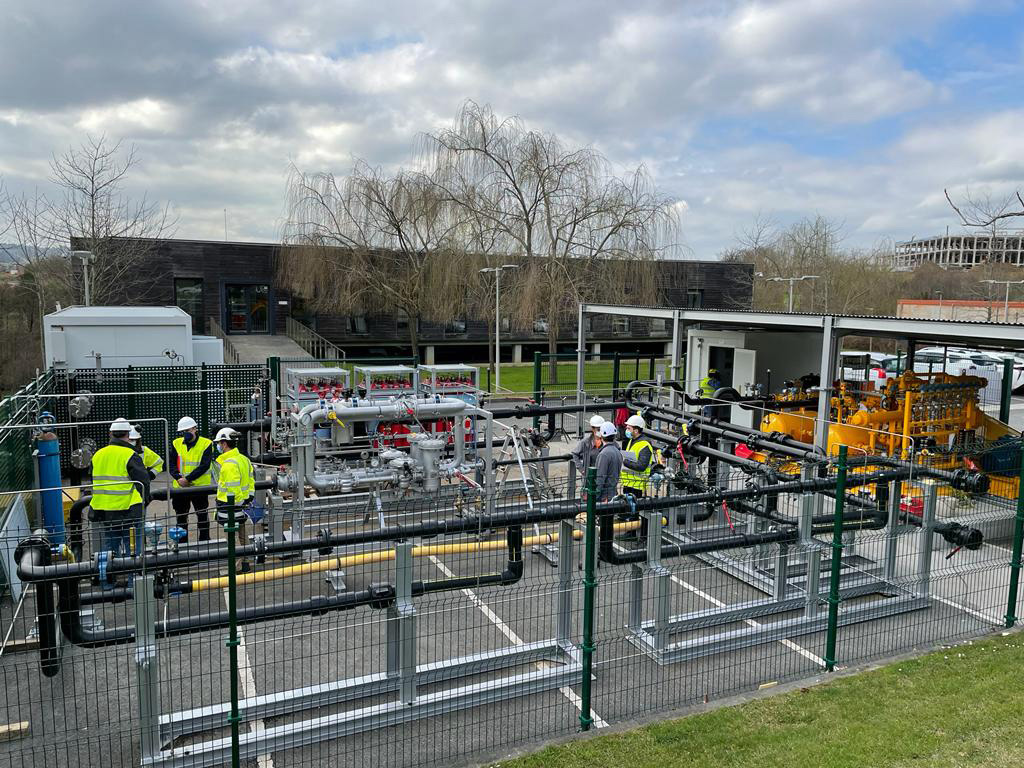 The first hydrogen test center in Spain measures little more than a tennis court. It is located in Zamudio, just 10 kilometers east of Bilbao, and has a single objective: to identify how prepared the current natural gas transportation networks are to withstand the pressure to which they will be subjected in the coming years, in which hydrogen renewable energy will gain more and more presence in European pipelines.

The swarm of pipes, mostly recovered from installations with decades of service behind them, is much more than that; It is a kind of pioneer stress test in the Old Continent for a future of the energy system that seems written in stone and in which hydrogen will play a central role. “We didn’t want to take anything for granted, but rather test it: there are many academic studies on how the network will respond to this change, but nobody has tested it in real conditions”, explains the technical manager of H2Area, Daniel Cuadrado. When this newspaper visited the facility, in mid-September, it had just finished a 3,000-hour block with the facility operating with 5% hydrogen and 95% fossil gas; a still initial phase of a process that should end with 100% hydrogen.

Behind this innovative test bench is Nortegas, the second largest Spanish distribution group for this fuel and the leader on the Cantabrian coast, with 8,000 kilometers of network and more than one million customers. With the investment, close to one million euros, it pursues a dual purpose: anticipating a future in which hydrogen will end up being dominant and also anticipating its own future as a company. For a gas distributor, the emergence of renewable alternatives —and the ability of its infrastructure to adapt to them— is a matter of life or death. “Already before the pandemic, in 2019, we began to consider that we did not want to be solely dedicated to gas distribution,” explains Javier Contreras, CEO of the former Naturgas. “The reflection was clear: if we don’t do something, these networks are going to end up becoming stranded assets, and in 30 or 40 years they won’t be worth anything. On the other hand, if we manage to ensure that gases that are clean or, at least, carbon neutral, circulate through our networks, we will automatically be making them necessary”.

That wake-up call about the viability of its main activity was what triggered a diversification strategy towards the so-called renewable gases: biogas and biomethane, and green hydrogen. “Decarbonizing is not just electrifying: not all energy demand is electrifiable and, even if it were, doing so would imply huge investments that nobody wants to undertake. What needs to be done is to replace polluting energy sources with less polluting ones,” says Contreras.

Green hydrogen has gone from being a distant future to something almost tangible, within reach. Called to be a substitute for natural gas in many industrial and transport processes, the rise in its price has begun to put both biomethane and renewable hydrogen at a price. Added to this more macro process is one of a more micro nature in the case of the Basque distributor: the conviction of its owners —JP Morgan, Swiss Life Asset Management and Covalis Capital— of the importance of thinking about the organization’s future horizon.

“When I say long term, it really is long term: our main shareholder [JP Morgan] it is an open fund, which has no obligation to return the capital to its investors within a certain period,” says Contreras. “And that allows us to bet on projects with returns on a very far-reaching horizon that would not be attractive to other types of shareholders.” Beyond H2Area, the Bilbao-based company has in mind some thirty biomethane production projects with a generation range of between 12 and 100 gigawatt hours (GWh) per year. His is also the first hydroduct (the name given to tubes entirely designed for transporting hydrogen) that is being built in Spain.

After years conjugating in the future all the verbs linked to hydrogen as a fuel, this is already a quasi-tangible reality. “It is a tremendous opportunity. We are the European country with the greatest solar and wind potential; and there will be quite a few days when there will be plenty of renewable energy, which the system will not be able to absorb and which will be dedicated to producing hydrogen”, slides Contreras. Nortegas wants to get on a train that, slowly and after years of promises, starts from the station.