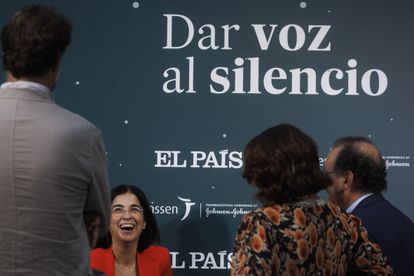 The Minister of Health Carolina Darias participates in the act ‘Give a voice to silence’. Sergio Pérez (EFE)

After the last match that tennis player Rafa Nadal won at the US Open, he confessed to journalists that he had felt bad because, in addition to the nose injury, he had suffered a lot from anxiety. The anecdote is told by Carlos de Vega, deputy director of EL PAÍS, as an example that there is more and more talk about mental health. But more needs to be done. And prevent, from school, companies, family. To prevent the stigma and the ball from reaching its most extreme situations, such as depression and, ultimately, suicide. These are some of the first conclusions of Giving a voice to silence, a forum organized, for the second year, by El PAÍS in collaboration with the pharmaceutical company Janssen, in the run-up to World Suicide Prevention Day, which is celebrated on September 10.

“In September 2022, it becomes clear, more than ever, that mental health is one of the great health problems that we have to face”, Luis Díaz-Rubio Amate, general director of Janssen Spain, opened the forum. Eugenie of the Torriente. Deputy director of EL PAÍS, she recognized that this summer she had been left “without a voice” when a young person close to her committed suicide, and she claimed the role of the media. “It helped me to think that from the newspaper we can help eliminate taboo and stigma,” she acknowledged.

The table dedicated to Mental health as a priority: keys to a healthy society produced some worrying statistics: 25% of the population suffers or will suffer from some type of mental disorder. “We have to convey the message that this can happen to all of us,” stressed Víctor Perez Solá, president of the Spanish Society of Psychiatry and Mental Health. And that it is necessary to weave, among all, a social support network that detects, attends preventively, and serves as a cushion when we lose our footing, without waiting for the problem to get bigger and bigger, according to Rafael Sotoca, Manager of the Cantabrian Health Service. Maribel Rodríguez, manager of ES + Mental Health, requested, on her part, a better emotional education and management of emotions.

The experts advocated technology and Social Networks as very useful tools to reach the vulnerable population, especially young people, as long as they are put to good use. “But let’s not forget the elderly, and the problems of loneliness,” claimed Vicente Gasull, coordinator of the Mental Health Working Group of the Spanish Society of Primary Care Physicians (SEMERGEN), recalling that one in three citizens suffers from loneliness , understood not as being alone but as feeling alone. “Whether as an isolated symptom or as part of a depressive disorder, a person who feels lonely has a 26% higher mortality,” he stressed.

Two years of a pandemic, the war in Ukraine and disturbing news about the climate crisis or humanitarian emergencies have aggravated mental health problems, especially in vulnerable groups such as women and young people. “The gender perspective is essential to address mental health problems,” said Mari Fe Bravo, head of Psychiatry, Clinical Psychology and Mental Health at Hospital La Paz. “The problem manifests itself differently: women suffer from anxiety and depression while men take refuge in alcoholism and toxic substances, although in young women this is changing, and they are adopting masculine patterns,” said Sandra Bernal, psychologist and collaborator of Hoy por Hoy of Cadena SER. Physical and/or sexual violence, family responsibilities or lack of conciliation aggravate pathologies. And furthermore, “fewer women than men come to our assistance services,” according to Graciela Rodríguez. Psychologist of the Biscayan Association of Relatives and People with Mental Illness (AVIFES).

The experts highlighted the quality of the public health system, but admitted its shortcomings, particularly in Primary Care, to reach all people with problems, especially young people. They also recognized the need for training professionals, and their shortage, which is especially serious in child and adolescent psychiatry, although the next MIR call will have 20 places in this specialty. Suicide was the second leading cause of death among young people in 2020, a group that has seen suicidal ideation triple since 2006. According to the Mental Health Million Project, a report that provides scientific data on the mental well-being of the world population, 44% of people between the ages of 18 and 24 show serious psychological problems.

Josep Antoni Ramos-Quiroga, head of the Mental Health service at the Hospital Universitari Vall d’Hebron, associate professor at the Universitat Autònoma de Barcelona and principal investigator of Grupo 27 CIBERSAM, hailed the National Plan for the Prevention of Adolescent Suicide as good news. “But you have to implement it,” he said. “Families and school have to coordinate; we must listen to our young people”, recommended Inmaculada Aragón, child-juvenile psychologist, member of the Spanish Society of Psychology Applied to Disasters, Urgencies and Emergencies (SEPADEM).

The data and contributions of the specialists were combined with the first-person testimony of an elite athlete, the karate fighter and Olympic medalist Damián Quintero; and the singers Beret and Anaju. The three have several things in common: they are young, they are under a lot of pressure, especially Beret and Anaju have become public figures, loved and hated on Social Networks (Anaju acknowledged that she has become hooked on Social Networks, although he is controlling it). And they talk about their anxiety problems or panic attacks normally.

The Minister of Health, Carolina Darias, thanked them for this and went on to talk about the Mental Health Strategy in the National Health System 2022-2026, endowed with 100 million euros between 2022 and 2024, and which has already given some fruits, such as 024: Hotline for Suicidal Behavior, which, since its launch in May 2022, has received more than 43,000 calls, more than 1,700 referred to emergency services. “That phone has prevented more than 700 ongoing suicides,” the minister congratulated.