There is a garden in Ninfa, 78 kilometers south of Rome, which motivates even transoceanic trips to discover it. According to The New York Times, here is one of the most beautiful and romantic gardens in the world. That depends on many things, starting with the state of mind and the potential of each one. What is certain is that it is a garden designed as a symbiosis of history and nature, of medieval ruins and English roses together with American chestnut trees, Japanese maples and Italian cypresses among its 1,300 different plants. With the addition of the sporadic song of a hundred species of birds. An explosion of biodiversity that of Ninfa, so contrasting, for example, with that of a Zen garden with only stones. Here rosebushes climb the walls of broken 12th-century basilicas. And they maintain remains of frescoes defying the centuries.

Ninfa has been declared a Natural Monument of Italy and enjoys an unexpected microclimate in the middle of the Pontine plain, between the Lepini mountains and the Tyrrhenian Sea. It is an eight-hectare garden whose originality consists in extending from what was once a prosperous medieval city until it was looted and abandoned at the foot of Norma and Sermoneta, two neighboring towns that have survived so many wars and calamities on their heights. Malaria began to be eradicated in this region, the Agro Pontino, in the twenties of the last century.

Ninfa was uninhabited nearly half a millennium earlier, but the cliffs of Norma protected its ruins and its environment, preventing lower clouds from passing through and unloading their destructive storms. Ninfa herself has plenty of water. In its river, also called Ninfa, today good trout swim. On one of its islets there was a Roman temple dedicated to the aquatic goddesses. And still Ninfa abounds in fountains and springs, and has a lake and dams. After the Romans, Ninfa was a possession of the Papal State, and a rich town disputed by the families of the Roman nobility. Ninfa had the luxury of having seven churches named after the seven basilicas of Rome. Pope Alexander III was crowned in Santa Maria Maggiore, who had to flee Rome pursued by the hosts of Frederick Barbarossa, the emperor who preferred to support another pope, or anti-pope, like Victor IV. 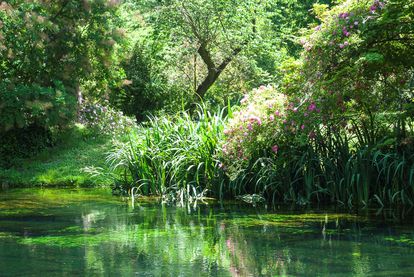 Garden of Ninfa in Italy.

Thus, Ninfa needed a double circular wall, and a castle and a tower that today form part of the landscaped garden. On the other hand, their industries, flour mills, ironworks and fulling mills did not survive. And everything was ruined by the greed of the religious factions during the Great Western Schism at the end of the 14th century.

But among so many ups and downs, a family, the Caetani family, which had a pope, Bonifacio VIII, remained in control of this territory. And so until the death of Donna Lella, the last heiress of the Caetani. In 1972, the Roffredo Caetani foundation was created, which manages the Jardín de Ninfa, and the Pantanello natural park in the nearby town of Cisterna de Latina, with one hundred hectares where the fauna prior to the malaria clean-up of the marshes has been reintroduced. And where, thanks to its absence of light pollution, they organize star sightings, such as the Perseids in August. 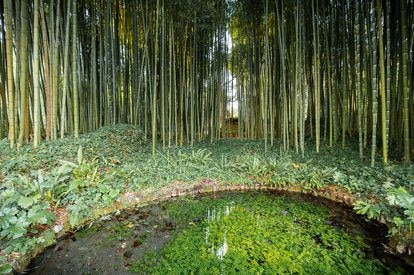 The existence of the Garden of Ninfa is largely due to the intuition and effort of Onorato Caetani in 1920, with his English wife Ada Bootle Wilbraham, and their sons Gelasio and Roffredo. In the medieval town hall, still standing with its bifora or double arch embedded in the façade, they built their country house and decided on the most important thing: not to further disrupt the ruins of Ninfa, but to connect new plants between them. The old cedars were combined with the bamboos that the Caetani had on their farm in Fogliano de Latina. The wisteria began to bear clusters and so many English roses climbed the medieval walls as if they were their home. To go to the Plaza de la Gloria there is a double row of lavender before the cherry trees. While on the bridge with two eyes, a poplar registered in the Archive of Italian Monumental Trees provides shade, a specimen that inspires respect and also the desire to paint it, or to photograph it with your personal memory. The Ninfa River runs through it with all its vigor. The visits are guided and it is forbidden to touch or cut anything. Pesticides are not even used, for that they raise ladybugs in wooden huts. They show such a voracity in consuming the pests that their food nearly equals their own weight.

A place as special as Ninfa was visited by writers such as the poet D’Annunzio or Boris Pasternak, the father of Doctor Zhivago. Already in the thirties Roffredo Caetani and his wife, the American Marguerite Chapin, left their residence in Versailles to settle here. In France, Marguetire founded Commerce, a literary magazine with signatures such as Paul Valery. In Italy he wanted to do the same at the end of World War II. In 1948 Marguerite founded her second literary magazine and called it Botteghe Oscure after the name of the street in Rome (between the Aracoeli and the ruins of the Theater of Balbo). At number 32 of that street, the Caetani had a palace and they put the newsroom there. Not far away, at number 4, was the headquarters of the Italian Communist Party. The magazine lasted until 1960 while the garden of Ninfa continued to progress and received many of the publication’s collaborators, who were not insignificant. Directly in English they published there from Truman Capote to Dylan Thomas. And there saw the public light the first chapter of the Leopard of Lampedusa and the first verses of Pasolini. Without counting the cream of the Italian literature of the second half of the 20th century, Gadda, Moravia… Or Calvino, the one who imagined the story of a rampant baron who, for what is down here, decided to go live in the glass from a tree. 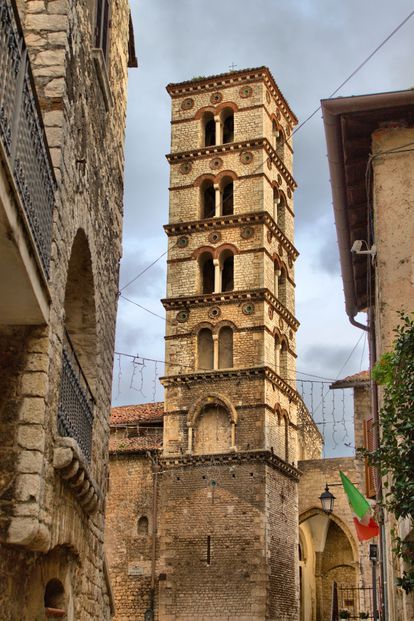 The tower of the Santa Maria Assunta cathedral in Sermoneta.alessandro0770 (Getty Images/iStockphoto)

Above Ninfa, hanging from a rock called Rave, stands the town of Norma. A mostly reconstructed medieval village, which was also a fiefdom of the Caetani. But much earlier, in 492 BC, on the outskirts of Norma there was a Roman city called Norba. A strategic acropolis that still amazes with the magnitude of its defensive walls, sometimes 15 meters high, with huge stone polygons. In the 2nd century BC civil war between Marcus and Sila Norba sided with the former, but the latter won, leading to its destruction and abandonment.

Today the calm is perfect from its natural viewpoint over the ancient marshes to the Tyrrhenian, where the island of Ponza can be glimpsed. And below, the dark green stain of the Ninfa garden, like an oasis in the Agro Pontino. And paragliding fans jump to fly from the Norba ravine itself. At lunchtime what triumphs in Norma is the pecorino. Sheep cheese on pasta and desserts, plus robust grilled meats from the Lepini mountains. 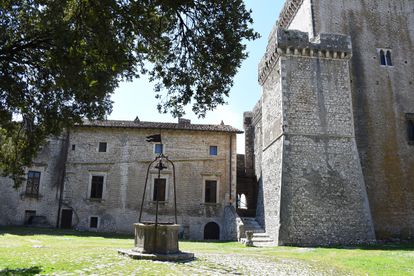 Four kilometers by air, and if not 11 by a winding road, you reach Sermoneta, which was the Caetani’s greatest fiefdom. This is a town that has its roots in the Middle Ages but that retains its genius and figure to this day. It is a trendy place for a getaway from Rome. It attracts the good air of the mountains and the steepness of this town that forms with its houses and neighborhoods a kind of pyramid whose vertex is the white stone castle of the Caetani. Where it is believed that Carlos V stayed, and surely Lucrecia Borgia, the daughter of the Spanish Pope Alexander VI, a terrible enemy of the Caetani, did. She not only excommunicated them but she confiscated her property.

Sermoneta recalls on plates and even in parades with period dresses the figure of Onorato Caetani, who in 1571 was Captain General of the Papal State Infantry, and as such, embarked on the ship La Grifona, participated in the battle of Lepanto. Glory and fanfare for him, something else went to a Spanish soldier who lost the mobility of an arm there and who, upon his return, would be taken prisoner in Algiers. And with all that he didn’t bow down neither his pride nor his wit. It was also one of the most important Jewish quarters in southern Italy. And its state of conservation is so impeccable that it has been used to film several documentaries. And part of a film like Seda, by François Girard, based on the novel by Alessandro Barico. The question now is to see and be seen on the terraces of the town’s squares where what is popular is drinking Aperol Spritz, the elegant revival of an artichoke-based drink.

Luis Pancorbo is the author of ‘Caviar, gods and oil. A trip around the Caspian Sea…’ (Renaissance Editorial)

Friday: Customer service for Facebook, Exoplanet as a candidate for ocean world