New accusations raise the victims of the religious scout de La Salle to 11: “He took us on excursions, gave us alcohol and touched us”

A former student of the San José de La Salle school in Jerez de la Frontera (Cádiz) accuses the former religious of this order Juan Antonio Álvarez Gordillo (Antequera, 1958) of abusing him and four other companions between 1995 and 1996, when he was director from the center. He has decided to tell his story after reading a report in this newspaper about seven other people who have denounced him for abuses in three schools of the order, when he was responsible for the Catholic Scout Movement: in Jerez de la Frontera (a complaint of abuses committed in 1980), in San Fernando (two, in 1982) and in the Lasallian center of Melilla (four, in 1985). In this way, the accusations against the cleric, who years later would leave the order, rise to 11, and the time span of his alleged crimes is extended until the 1990s, for a total of 25 years. And, in reality, Álvarez Gordillo has continued to be a teacher to this day; He currently works at the Cerrado de Calderón lay concerted school in Malaga, where he is on sick leave. The La Salle congregation affirms that an internal investigation is still open to clarify what happened. “The archives are being searched to obtain the correct information,” a spokeswoman told EL PAÍS.

The new testimony relates that the arrival of Álvarez Gordillo at the La Salle school in Jerez de la Frontera, as the new director, changed the atmosphere of the center in 1994, as if a cloud of black smoke had seeped through the classrooms. “It was a dictatorship, it implemented a straight law. For example, when he entered class, even if another teacher was giving the lesson, he had to get up, as if he were the king. You would hear teachers talking bad about him behind his back,” he recalls. A regime where, according to this former student, violence was common. “I remember that one day in the school canteen there was a battle of balls of aluminum foil, with which we wrapped the sandwiches. One hit him in the face and, suddenly, he grabbed the first colleague who passed him and punched and kicked him. The parents went to talk to him, but I don’t know how that turned out, ”he narrates.

A year later, the new director also became the complainant’s guardian: “That was when the abuses started. He was a total manipulator, he punished you to go to school in the afternoons, after eating, to pick up gum stuck to the ground or water the plants. After cleaning, he would make me go up to the rooms that the brothers had there so that I would sit next to him: he would give me jellies and touch me. He would also take me to his bed and tell me to go to bed. And then he would lie down next to me”, relates this former student with a broken voice. He did the same thing, adds the victim, when he took her to see the birds that the priest had in the dovecote in the center. While he was looking at the macaws, he says, Álvarez Gordillo touched his parts.

This former student affirms that Álvarez Gordillo not only exceeded himself with him, but also with four other classmates, “a small group” selected by the accused, whom he took on excursions to places where, away from other people, he abused them. “He took us in his excursion car to Antequera, to the house and the farm that his parents had there. When these were not. He gave us alcohol and touched us. He also took us to Puerto de Santa María, to the movies or to dinner. He didn’t hold back when he was with us alone. I saw how the colleague who was the co-pilot touched his legs, ”he says. This former student also explains that, although Álvarez Gordillo’s behavior was not vox populi, many students at the center knew that the former religious abused them.

Álvarez Gordillo’s life as a teacher has been a continuous succession of transfers from center to center where, according to his current victims, “he continued touching children.” After Jerez (1980) and San Fernando (1982-1984), he spent a year in Chiclana (1984-1985) and then settled in Melilla (1986-1990). He was followed by the Cadiz schools of Puerto Real (1990-1992) and Puerto de Santa María (1992-1994). He returned to Jerez in 1994, where he remained, according to a report card in which his signature appears, at least until 1997. He continued as director in Andújar until 2000. He moved to Madrid for a year, to the Center for Lasallian Studies, and between in 2001 and 2005 he was a professor at a center of the order in Almería. The following year he left the congregation and continued as a teacher in other concerted schools in Andalusia. 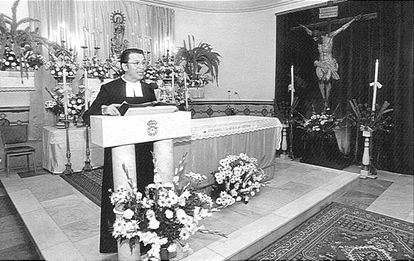 Juan Antonio Álvarez Gordillo, during a religious proclamation at the Mirandilla de La Salle center, in Cádiz, in the 1990s. DIARIO DE CÁDIZ

“In all these cities he was linked to the brotherhood environment, enriching himself with the popular religious feeling of these different corners of Andalusia, which has allowed him to have a more general vision of the brotherhood world; a vision that has allowed him to give numerous talks to different Andalusian brotherhoods”, says a program of the Holy Week celebrations in Antequera in 1993, where the defendant delivered the proclamation. He was not the only city where he did it, also in Melilla (in 1992) and in the presentation of the poster of the same parties in 1994, in Puerto de Santa María. Events that were covered by the local press of the time, such as the Diario de Cádiz.

The story of this defendant has circulated through several national and local media. This is how Álvarez Gordillo’s new victim learned that there were more victims in other centers: “When I saw in the EL PAÍS report that no victim appeared in Jerez de la Frontera from my time, I wrote. People have to know what he did.” This victim adds that the abuse has been a shadow that she has not yet managed to shake off. He has never told his family about it, so he wants to remain anonymous. “It destroyed my childhood and I’m sure it destroyed more people too,” he stresses. Added to the pain was the fear he felt, years after the ex-religious left Jerez, when he imagined him abusing other minors in his new destination. “After losing sight of him, about six years later, I tracked him down and called him anonymously to tell him that he knew what he was doing to the children, to stop or I would tell the police. I don’t know how it happened, but soon another religious from La Salle showed up at the door of my house and threatened me that Álvarez Gordillo had contacts in the Civil Guard and that no one would believe me”, he assures.

La Salle does not specify the reasons why the accused left the congregation or whether they received complaints of alleged abuse. “All this is legalized and has already come out in the media. As we always do as soon as we have information of a possible abuse that may have happened under our responsibility, we transfer that information to the competent authority, and we did the same in the matter of Álvarez Gordillo”, affirms a spokeswoman for the congregation.

Currently, Álvarez Gordillo teaches at the Colegio Cerrado de Calderón, in Malaga, where he has been a teacher for the last 12 years, according to the current director of the center, Luis Lanzat. “Always respecting the presumption of innocence to which he is entitled, it is clear that my obligation from this very moment is to prevent him from having contact with our students again. And so I will. The moment he comes back from medical leave he will be removed from teaching, ”Lanzat wrote in an email to a relative of one of the victims.

The case of Álvarez Gordillo is included in the two reports with 451 cases of pederasty that EL PAÍS delivered to the Spanish Episcopal Conference and the Vatican at the end of 2021 and last June, after dozens of victims wrote to this newspaper.