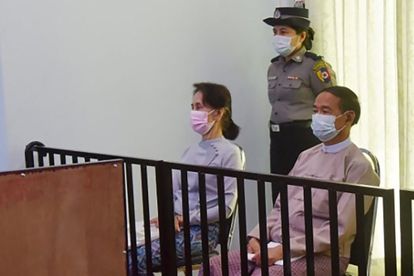 The days of Aung San Suu Kyi seem to have been reduced to seeing the time pass between sentences, waiting for appeals with an improbable favorable outcome. The former Burmese leader, detained since the February 1, 2021 coup, was sentenced this Monday by a military court to six years in prison for corruption. This is the fifth conviction against the Nobel Peace Prize winner since the judicial process began last December for the alleged 18 crimes imputed to her, which could lead to a joint sentence of almost two centuries behind bars. Myanmar has been in political, economic and social chaos since the coup. According to organizations in favor of human rights, more than 12,000 people are imprisoned for their opposition to the military regime.

According to the digital Myanmar Now, a military court in Naypyidaw, the Burmese capital, ruled on Monday that Suu Kyi, former de facto leader of the Southeast Asian country, abused her position of power as president of the National League for Democracy and benefited the Daw Khin Kyi Foundation and an associated project. The woman also known as La Dama founded this non-governmental organization in 2012 with the aim of promoting the health, education and living standards of the country’s population (54 million inhabitants), according to what can be read on the website of she.

The military regime assures that the former State Counselor used her influence to allow the Daw Khin Kyi Foundation – which bears the name of her mother – to rent government land for its headquarters in the municipality of Bahan, in Yangon – the largest city in the country—at prices lower than those on the market. According to the Army, this embezzlement cost the country some 2.75 billion euros. He is also accused of buying several pieces of land in Naypyidaw on behalf of the organization to build the La Yaung Taw agricultural and vocational school, a transaction in which Myanmar lost 10 billion euros, according to the Armed Forces (Tatmadaw).

Suu Kyi has been sentenced under the Anti-Corruption Law to a combined sentence of three years for the three crimes related to the purchase of land and another three for the lease. These sentences are added to the 11 years that she had already accumulated after the trials in December, January and April in which she was found guilty of accepting bribes, of illegal possession of various telecommunications devices, of violating the protocols activated to stop the covid-19 , as well as inciting the protests that in 2021 flooded the streets of the nation calling for his release.

All the trials are being held behind closed doors and without witnesses, and the military authorities have decreed the secrecy of the summary, so their lawyers are prohibited from granting interviews. In the more than 18 months that have passed since his arrest, the number of crimes against him has only increased. Suu Kyi, 77, will have to sit on the bench nine more times for other alleged cases of corruption (each charge carries a maximum sentence of 15 years and a fine) and for breaking the colonial-era official secrets law, crime punishable by up to 14 years in prison.

“This is an attack on her rights, and part of the campaign to bury her and the National League for Democracy forever,” said Phil Robertson, deputy Asia director at Human Rights Watch. International analysts affirm that the charges against the politician are nothing more than a farce so that she remains in prison indefinitely. The former Burmese de facto leader was arbitrarily detained and placed under house arrest immediately after the riot. In June, the coup junta transferred her from an unknown location to the Naypyidaw Detention Center, where a special room was built to hold her trials.

The 1991 Nobel Peace Prize winner led the democratic movement that emerged against the military dictatorship that ruled the former Burma for half a century (1962-2011). After a decade of transition to democracy, now cut short by the coup, hundreds of thousands of people continue to defy the Army and fight to overthrow the military regime. According to the Association for Assistance to Political Prisoners, 2,191 people have been murdered at the hands of the Junta during its violent campaign of repression. The Tatmadaw executed four pro-democracy activists in July in the country’s first use of the death penalty since 1988.

Anthological victory of Aronian over Carlsen