The premiere of DAZN in LaLiga Santander has not been the best that was desired. The streaming platform collapsed with the broadcast of the FC Barcelona-Rayo Vallecano match that took place on Saturday, the 13th, leaving a large part of the match unable to watch not only its subscribers but those of Movistar + and Orange who came to an agreement with DAZN to be able to broadcast the five games per day over which it has the rights.

The condition for accessing these matches is that the user, whether they contract directly with DAZN or are subscribed to the operators, must create an account on the platform and access the match from that app. But due to the avalanche of requests, the DAZN server went down and subscribers were unable to see the match between Blaugrana and Vallecano, either in its entirety or in part.

To solve the situation, DAZN has had no choice but to deliver the signal to both Movistar Plus + and Orange and give its authorization so that in the matches for the rest of the day (such as Valencia-Girona played on Sunday) over which it had rights can be seen directly on the grid of the operators’ televisions, without the need to create a DAZN account.

Both Movistar Plus+ and Orange informed their subscribers from the outset that the cause of their not being able to watch the Camp Nou match was due to a technical problem with DAZN “Due to technical problems on the DAZN platform unrelated to Movistar, our clients do not they were able to activate access to the DAZN platform on devices,” said the chain owned by Telefónica through Twitter. Orange pronounced in similar terms. 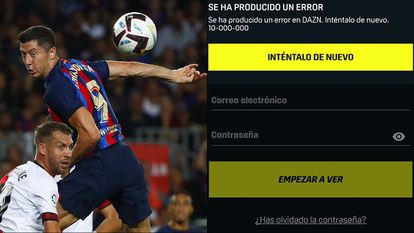 Screenshot with the DAZN access problem in the Barça-Rayo match last Saturday.

However, given the level of complaints and the commotion that arose on social networks as it was the league premiere, and because it was the first game broadcast by DAZN of one of the big teams, both Telefónica and Orange proposed to the sports platform to give the signal directly through your grill and through your mobile app. From DAZN they admit the problems to register, but point out that it is a temporary solution until they solve the technical incident. Sources from the operators do not rule out requesting compensation from DAZN for the damages caused to its subscribers according to the conditions of the contract for the assignment of rights.

Much was expected of DAZN’s debut in the top league competition because it came to break the duopoly that Telefónica and Orange have had for three seasons over the rights to the competition. DAZN is the only purely television operator that allows only football to be contracted, but its offer, although very cheap (18.99 euros per month), is incomplete for the fan: it does not give the Champions League or Europa League and it only has five First Division matches per day and broadcasts only 35 of the 38 days. To watch all the continental and national competitions (LaLiga, Champions and Europa League) you must continue contracting a telephone and Internet package with Telefónica or Orange. The minimum cost of the package with all the football is from 85 euros per month.