Motorola has been busy in the last few months and is not only producing mass, but also class. The Motorola Edge 30 (test report), which was released six months ago, offers a 144 Hz display, while the more expensive Edge 30 Pro (test report) is courting buyers with the fast Snapdragon 8 Gen 1. The manufacturer, which belongs to Lenovo, is now launching three more models in the Edge 30 family: Neo, Fusion and Ultra. We took a look at the cheapest model, which you can now get for little more than 350 euros: the Motorola Edge 30 Neo.

While the other two models score with more technology, Motorola focuses on design with the Edge 30 Neo. The available colors “Very Peri”, “Aqua Foam”, “Black Onyx” and “Ice Palace” come from the color specialist Pantone, a logo on the back about the size of a SIM card indicates this separately. The narrow LED strip that winds around the protruding narrow edge of the camera could also be included under the generic term design. This can be used to signal incoming messages. Since the LED strip is surprisingly dark, most users will probably overlook it. The rest is rather standard. The frame is made of plastic that looks dark anodized, the back also uses the basically rather inferior material.

Overall, the Edge 30 Neo cannot be said to have a poor quality. On the contrary. Together with the excellent workmanship, the velvety and non-slip back is particularly pleasant and the color of the camera is integrated into the overall design. In addition, there is a (apart from the clearly protruding camera) overall quite thin case with subtle curves on the edges, which means that the smartphone fits well in the hand. There is also protection against moisture, even if only according to IP52, i.e. splash water.

All pictures of the Motorola Edge 30 Neo in the test

When it comes to the display, Motorola isn’t stingy and installs an HDR-capable OLED display with a 6.3-inch diagonal and 2400 x 1080 pixels in a 20:9 format. The image sharpness is high at almost 420 ppi (pixels per inch), and thanks to 120 Hz playback, even moving content is rendered sharply and smoothly. The manufacturer apparently paid special attention to the display brightness. With just over 950 cd/m² in automatic mode and 460 candela in manual mode, it is very high for the middle class and ensures good readability even in bright surroundings. We also like the color reproduction and contrasts, and the black value as usual with OLED anyway. The display is undoubtedly one of the highlights mentioned.

Motorola installs a thoroughly honest camera with a 64-megapixel main and 13-megapixel wide-angle camera in the Edge 30 Neo. Thankfully, the manufacturer dispenses with frills such as macro or depth-of-field sensors. For selfies there is a camera with an impressive 32 megapixels, which peeks through a punch hole in the middle of the top edge of the screen. 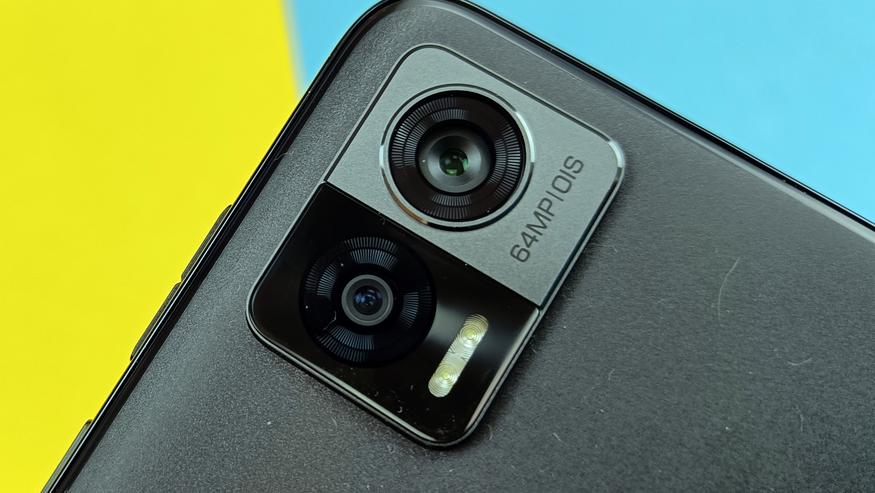 In daylight, the main camera snaps attractive pictures that don’t require an overly steady hand, not least thanks to the built-in optical image stabilizer (OIS). The image sharpness fits into the middle class, the same applies to image dynamics, color reproduction and white balance. Image noise is hardly visible in good light. As is so often the case, the wide angle cannot quite keep up and shows significantly less sharpness overall, but especially at the outermost edges. In daylight, however, the recordings are usable.

It’s different in bad light. Both cameras clearly lose image sharpness here and more and more details are lost. Many competitors do it better. The weak light behavior is particularly disappointing for the main camera, which has an OIS. The selfie cam takes decent pictures, but without being able to set itself apart from the competition.

Elsewhere, the Motorola Edge 30 Neo’s camera is disappointing: when it comes to video recording. 1080p/60 is the end here, 4K does not exist. Overall, the image quality is okay for the resolution, but the lack of 4K recordings and their additional image sharpness is anything but contemporary.

Motorola relies on a Snapdragon 695 chipset. The mid-range chip offers clock speeds of up to 2.2 GHz and comes with an Adreno 619 GPU. Together with the built-in 8 GB of RAM, it provides sufficient performance for everyday use and most users will not miss anything. However, that’s not enough for demanding 3D games. Interested parties should use models with Snapdragons from the 8 series. With the built-in technology, the Motorola Edge 30 Neo achieves just over 10,000 points in PCmark Work 3.0 and 1200 points in 3Dmark Wild Life. This matches the performance profile described. In everyday use, the advantages of the display and sufficient performance outweigh the disadvantages. Moving content is displayed smoothly, apps load sufficiently quickly and there are rarely brief stutters when changing apps in normal use.

The built-in chipset also specifies the remaining features of the smartphone. It only offers Wifi 5, USB 2.0 and 5G with a maximum of 300 mBit/s, but most users should hardly notice this negatively. We are not convinced by the speakers, which sound too tinny for our taste. The fingerprint sensor in the display reacts quickly and reliably, as is appropriate for the middle class. The internal memory of 128 GB cannot be expanded. Further information is summarized in the table.

There are hardly any abnormalities in the software. Motorola relies on Android 12 with the latest security patch, the user interface is not a mystery. The highlight is the “ready-for” function. With this desktop mode, the smartphone in combination with an HDMI-capable monitor or television (and a USB-C-to-HDMI cable that is not included) becomes a PC replacement like with Samsung Dex. With the Edge 30 Neo, however, the performance of the chipset is sometimes a limiting factor.

The Edge series is not known for particularly large batteries, which is no different with the Motorola Edge 30 Neo. The power dispenser in the new model only delivers 4020 mAh, which does not promise top values ​​for stamina. And as with the Motorola Edge 30 (test report) with the same battery, we are not satisfied with the Edge 30 Neo either. Because with just over 7 hours at 120 Hz use, the newer model is slightly better, but anything but good. The loading speed is significantly better. The Neo charges with 68 watts, while wirelessly it advances with a leisurely 5 watts. The charging option via Qi is a bit surprising, after all this is still not standard in the middle class, and the more expensive Fusion of the new Edge 30 trio is not able to do this.

At the time of testing, the black version of the Motorola Edge 30 Neo cost a little more than 350 euros. The color versions Very Peri (purple), Ice Palace (silver) and Aqua Foam (green) cost up to 390 euros. There are no other memory versions.

The Motorola Edge 30 Neo doesn’t make it easy to make a clear judgment. On the one hand, it is a decent smartphone with highlights in terms of display and wireless charging. It is also sufficiently chic, although this has less to do with the cooperation with Pantone and more to do with the thin design itself and the velvety back. On the other hand, the camera is a real good-weather snap, the battery life leaves a lot to be desired and the performance is good for everyday use, but overall it is not particularly worth mentioning.