Banaia is the most successful of all!

On a wet track in Buriram, Thailand, Miguel Oliveira (KTM) once again triumphed in the rain to take his second win of the year. A podium for Pecco Bagnaia (Ducati) who reduced the points gap to (just) 2 from the leader Fabio Quartararo (Yamaha) who did not manage to collect a single point! Written by MotoGP Guru

In treacherous and very difficult race conditions, the one who handled the bike and its tires best was Portugal’s Miguel Oliveira, who had already won this year’s Indonesia race in similar conditions and is now emerging as the best rider in the rain. 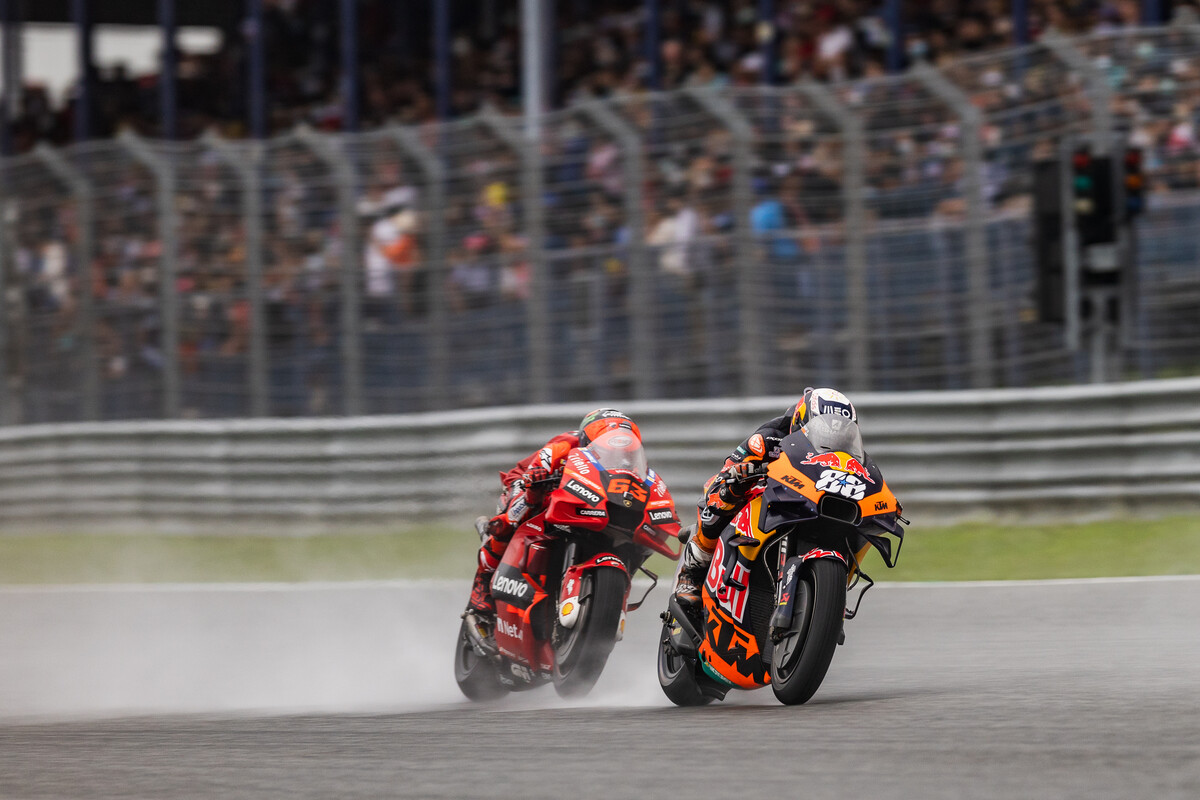 Miguel who was the only one to interrupt the streak and the Ducati party, which was on the podium with its two factory riders, but with the order not changed. Miller didn’t let Pecco Bagnaia pass him by stealing second place from his teammate and the 4 valuable points that would have given him the lead in the standings!

Pecco Bagnaia was by no means misunderstood after the race however, instead thanking Miller for the advice he had given him before the start which helped him stay in a competitive position. The relations between the factory riders are more than good, as they are both likeable and relaxed characters, a situation completely different from what used to happen in MotoGP. 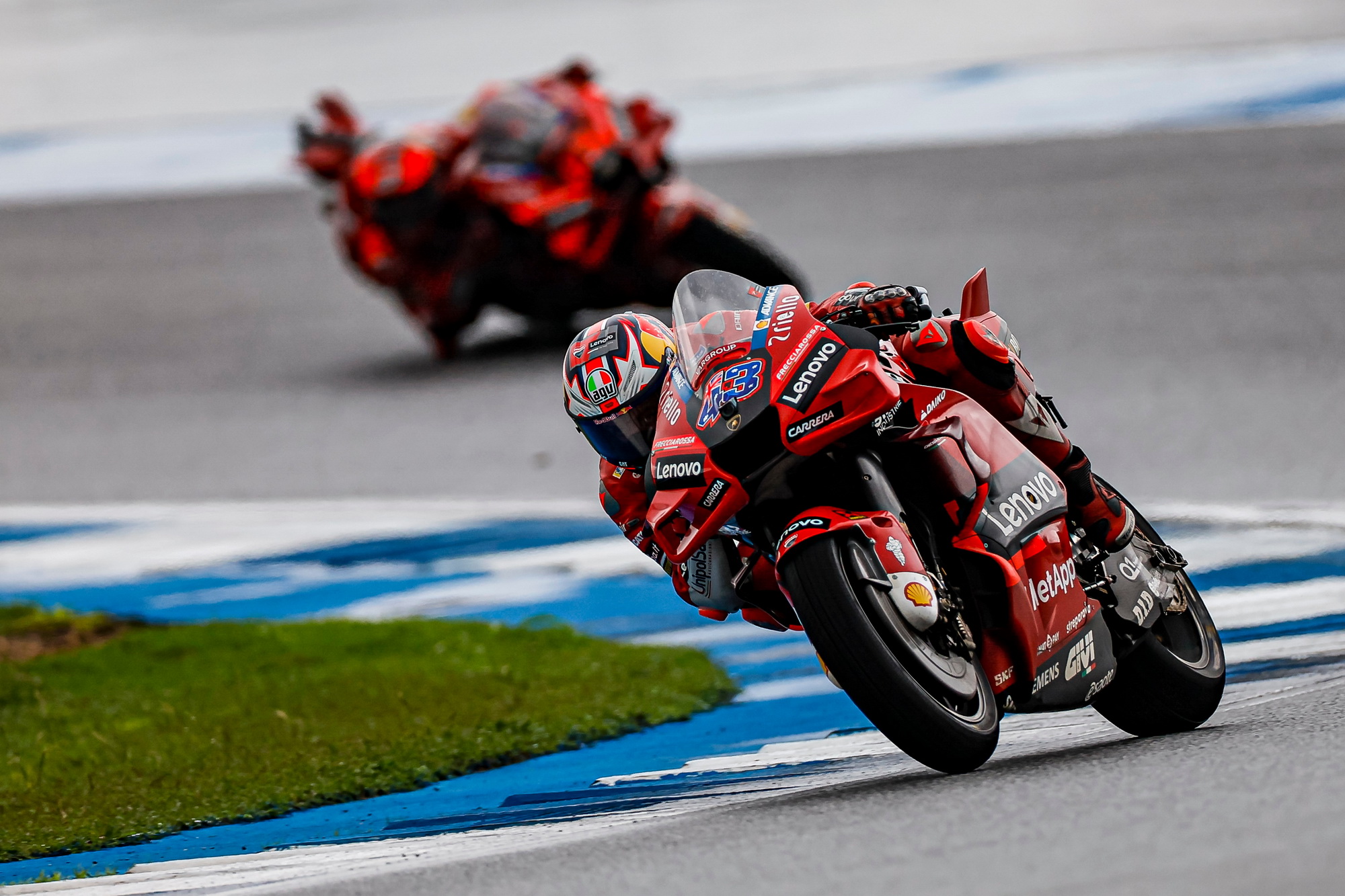 Johann Zarco, on the satellite Ducati, managed to come from behind in the final laps to finish fourth, after deciding not to attack third-placed Pecco Bagnaia, who needed the points on his way to the title.

Be that as it may, Bagnaia and Ducati were the big winners of the day, in which their rivals were overwhelmed.

Aleix Espargaró (Aprilia) after a dangerous pass on Brad Binder (KTM) was penalized for a mandatory long-lap pass, finished 11th and Fabio Quartararo could do no better than 17th! 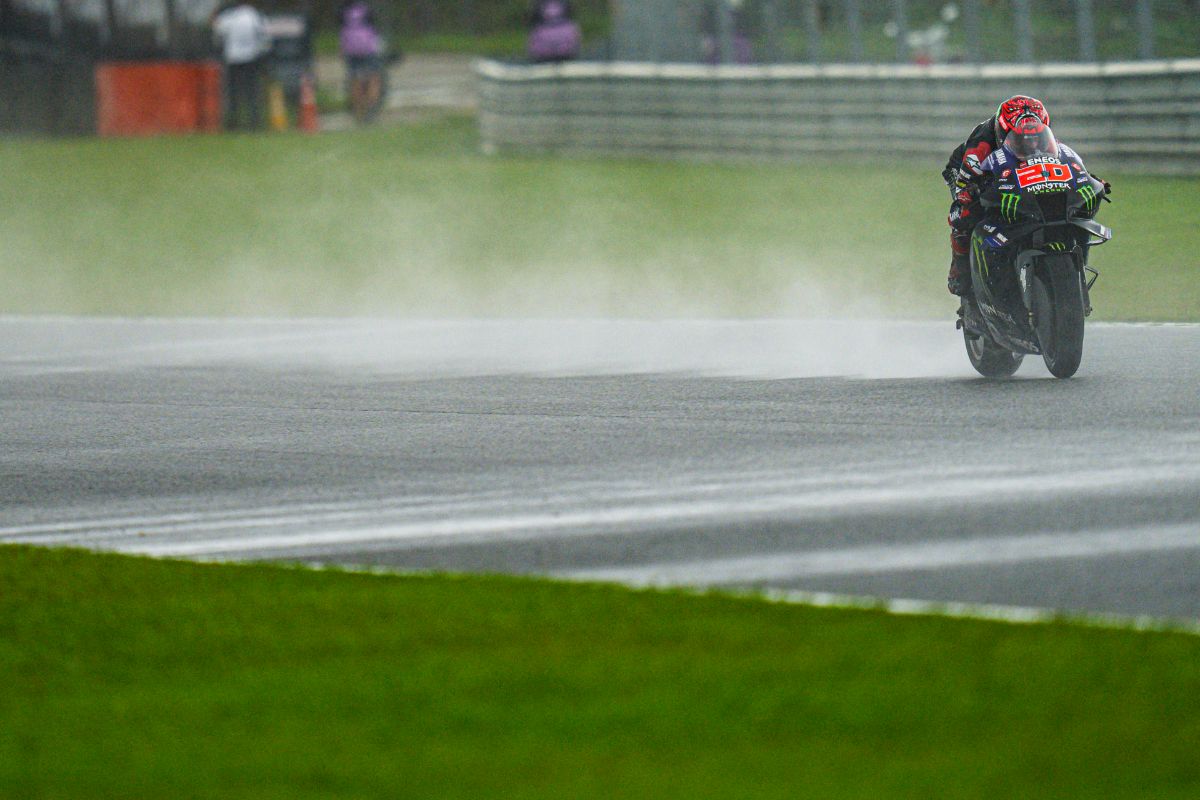 As for Marc Márquez (Honda) who was dreaming of a podium, he ended up finishing 5th in what he said was “by far the best weekend of the year”.

Almost an hour late, the MotoGP race started at the Buriram circuit in Thailand, with a lot of water on the tarmac and very low visibility for the riders.

At the start of the race, Bezzecchi (pole position in MotoGP for the first time in his career) and Martín crashed and went off the track.

The Italian held on to first place, but shortly afterwards the marshals penalized him by dropping him one place. Behind him the Ducati army was taking the lead, with Bagnaia in second, Miller third, Martín fourth, Marini fifth and Marc Márquez already fifth. 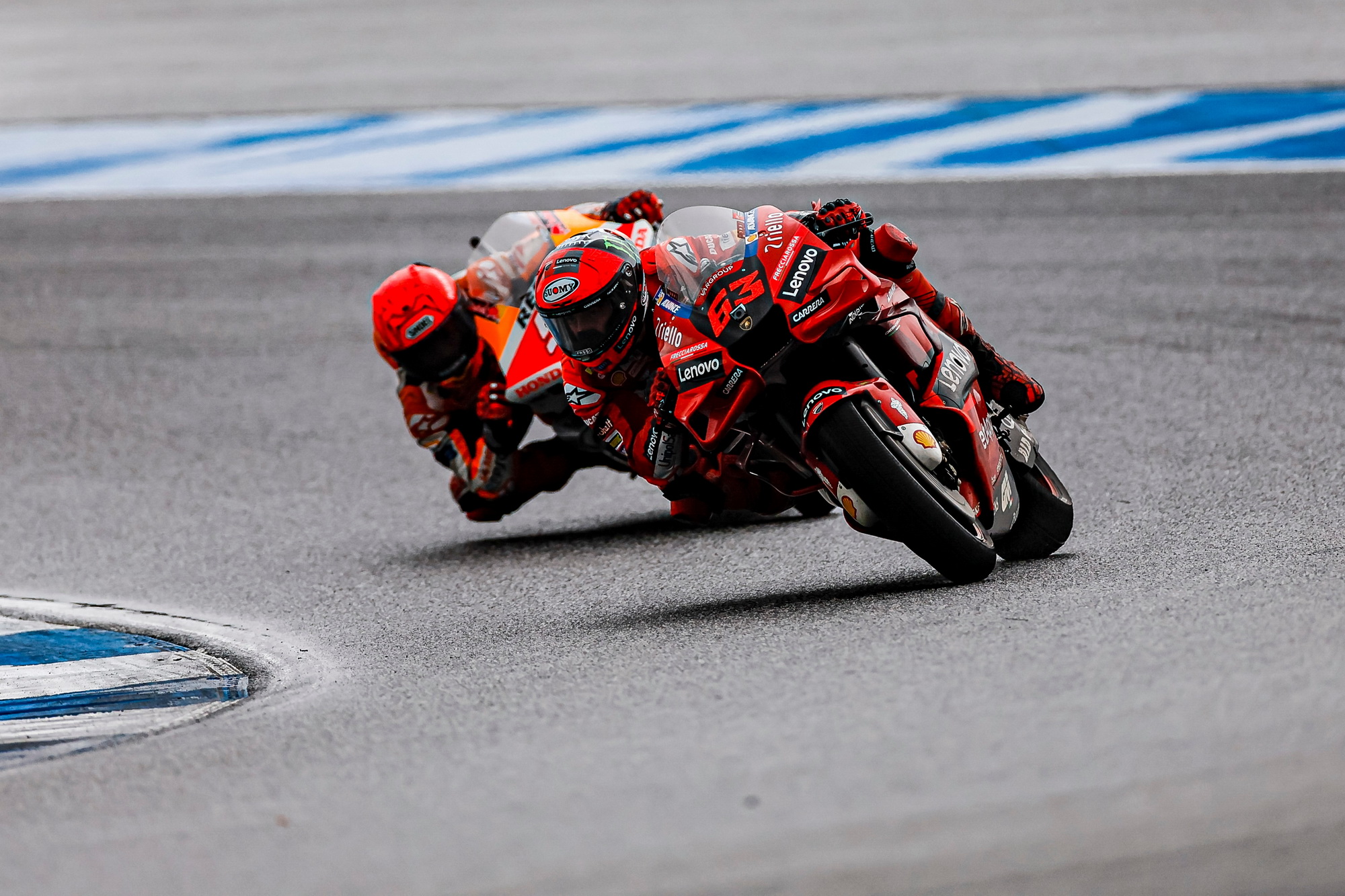 Pecco Bagnaia ahead of Marc Márquez

The one who was hurt the most at the start was Fabio Quartararo who dropped from fourth to 17th and was about to go down for real this time after contact with Álex Márquez. It’s as if he’s destined to be beaten by a Márquez in every race…

Alex Espargaró remained 11th, while Luca Marini’s first fall of the day (a first in a race, as the Italian rider is renowned for his consistency) was recorded in fourth.

Up front, Miller took the lead, while Oliveira moved up places and passed the Ducatis to move into second.

Miller and Oliveira were several meters ahead of the rest, lapsing nearly a second faster than their rivals, with the Portuguese trying to overtake for the first time on lap 8, although the Australian was soon passed again. 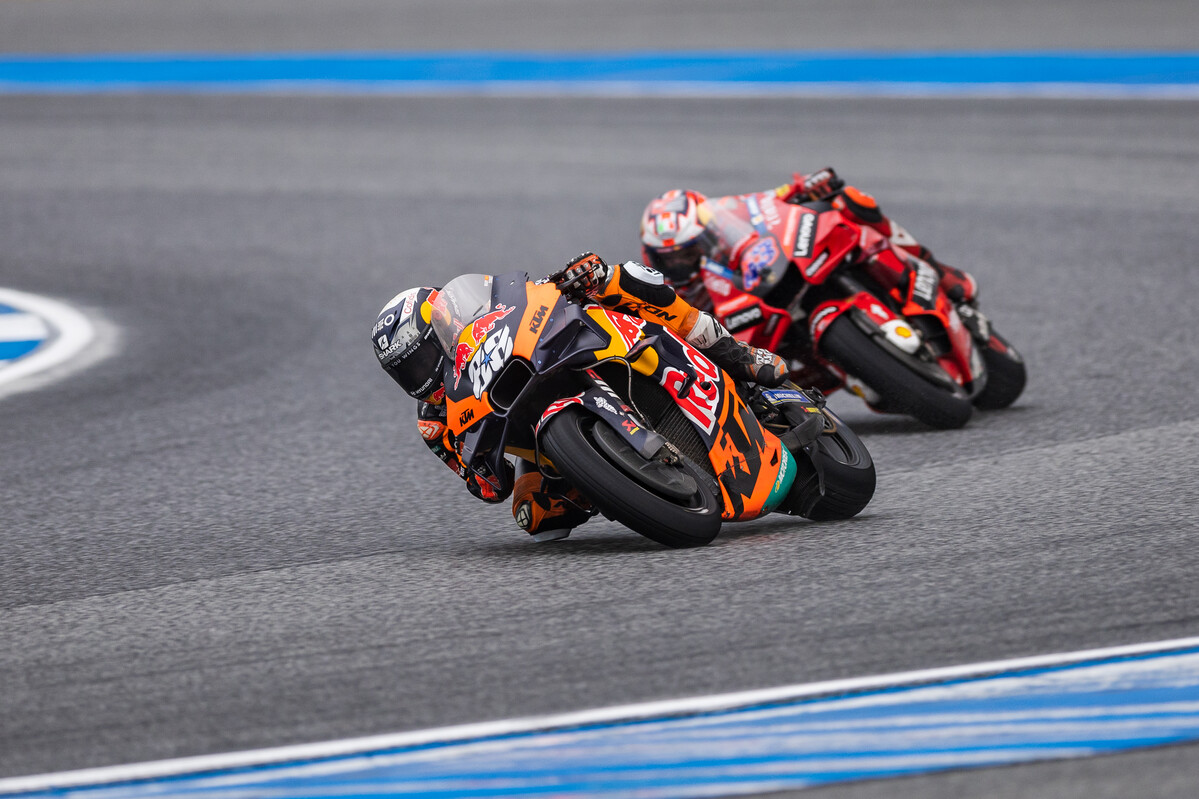 Oliveira ahead of Miller

Meanwhile, Aleix Espargaró was penalized with a Long Lap for “irresponsible driving”, after an early-race hit to Brad BInder sent him off the track.

Márquez meanwhile had recovered to 4th place and was closing in on Bagnaia, starting to dream that he might even be able to get on the podium.

Up front, Oliveira had already opened up a second gap to Miller, while after a failed attempt by Marquez to pass Bagnaia 5 laps before the checkered flag, he appeared to be stuck and passed by Joan Zarco. The Frenchman showed respect for the Ducati leader and title contender and accompanied Pecco in this position until the finish. 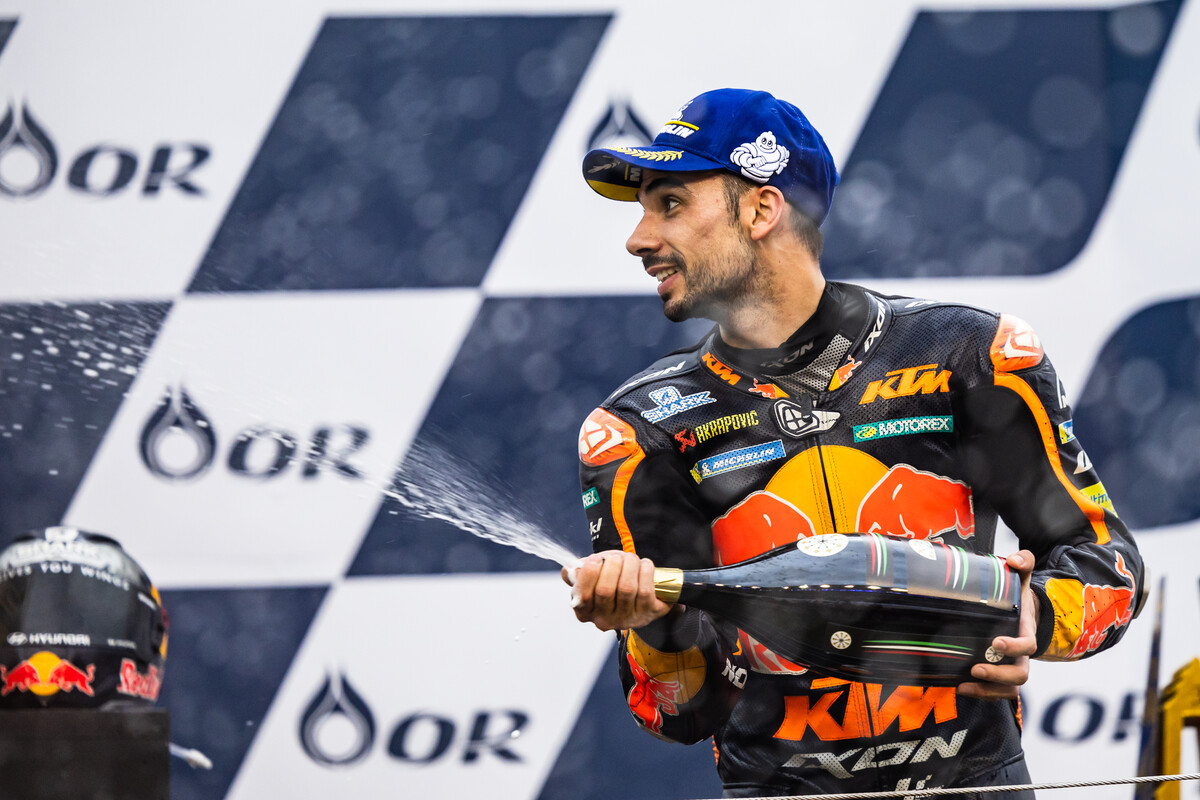 Second victory of the season for Miguel Oliveira, again on a wet track. Jack Miller returned to the podium, while Pecco Bagnaia was the main race winner among the title contenders.

Points leader Fabio Quartararo was wrecked in the Thai storms and finished 17th.

“It was a long race, but I have no complaints because every time we had the chance to race in the wet, we did well. I was trying not to make mistakes and get the bike to the finish,” said Thailand winner Miguel Oliveira.

Next race in two weeks at Phillip Island in Australia

MOTORCYCLE creation calendar door 1: BÜSE TRAVEL PRO – the boys’s jacket for each season and each journey

X-Thought Xcell gas cell bike as a examine: Sooner or later, solely water will come out

Pope calls on Putin to stop war in Ukraine