Admittedly, the saying is pretty flat, but it shoots through the head of Guzzi friends: the eagle was ill for many years, now it’s flying again, thank God! Because if Moto Guzzi, since 2004 under the wing of the Piaggio Group, which is not known to be risk-taking, now boldly constructs the very first water-cooled V2 of the company, there is still hope – for Guzzi, for the combustion engine and for the future of all of us motorcycles.

The Moto Guzzi V100 Mandello is announced in two versions, the more luxurious comes standard with a semi-active Öhlins chassis, quick shifter, heated grips and connectivity. Since September 2022, the V 100 Mandello and the S can be pre-ordered from Moto Guzzi. Prices start at 15,499 euros for the basic version and 17,999 euros for the upgraded version. From 2023 we will see the new Guzzi on the streets. In addition to the well-known red for the basic V and the green-silver for the S, Moto Guzzi presented two other colors during the presentation of the V100 Mandello Aviazione Navale. White for the base, black for the S version.

But now quickly from the pathetic to the concrete: The first pictures and information about the new Moto Guzzi V100 Mandello were already known at a preview in September. At the Milan trade fair, the manufacturer will release more information, but by no means all, for example no price. But he proudly lists the innovations of the water-cooled V2. Accordingly, the V100 Mandello, named after the plant on Lake Como, is the first motorcycle in the world to be powered by adaptive aerodynamics: next to the windshield there are small wings in the fairing, so-called flaps, which open and close depending on the speed, as does the driving Cockpit glass automatically up and down. 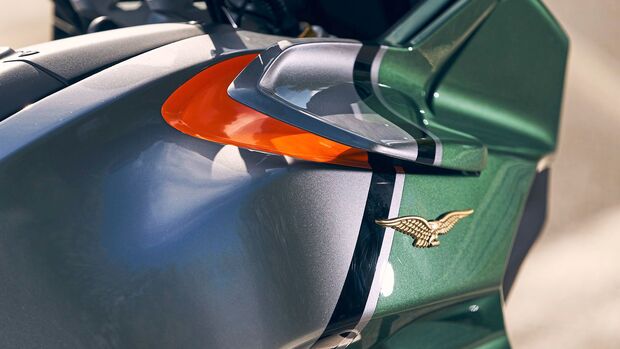 Other premieres: The Moto Guzzi V100 Mandello is the first Guzzi with a six-axis sensor and thus cornering ABS, the first Guzzi with a semi-active chassis and the first Guzzi with a quickshifter. In addition, the Mandello offers four driving modes (Travel, Sport, Rain and Road) and an engine drag torque control that can be set in three stages. Plus, in our opinion, an all-round visually successful motorcycle that skilfully combines tradition and modernity, from the Le Mans-style slotted side covers to the muscular shape of the 17.5-liter tank. The lighting relies on LED technology all around, even with cornering lights at the front. A 5-inch (12.7 cm) color TFT display in the cockpit, which can also be used to connect smartphones, provides information.

There’s also a lot that’s new in the engine with a displacement of 1,042 cm³. Compared to the past, the water V2’s cylinder heads have been rotated 90 degrees, making the driver’s seating position more comfortable and also allowing better positioning of the intake ports and fuel injection. “Compact Block” is what Guzzi calls the new V2, which is 103 mm shorter than that in the V85 TT. Its four valves per cylinder are driven by two overhead, chain-controlled camshafts. The result is an extremely promising, because torque-oriented performance. It will be 115 hp at 8,800 rpm and 105 Nm at 6,750 rpm.

In general, Moto Guzzi attaches great importance to comfort with its new crossover bike, for example with the lavish seat and the cases available as accessories. But sport and driving dynamics are not neglected, the Moto Guzzi V100 Mandello should be stable and agile at the same time, which is supported by the comparatively compact wheelbase of 1,486 mm. Even the cardan torque should disappear thanks to the newly designed single-sided swingarm.

Whether the market accepts the Moto Guzzi V100 Mandello as happily as the latest novelty, the V85 TT travel enduro, depends not least on the price – and it starts at 15,499 euros.