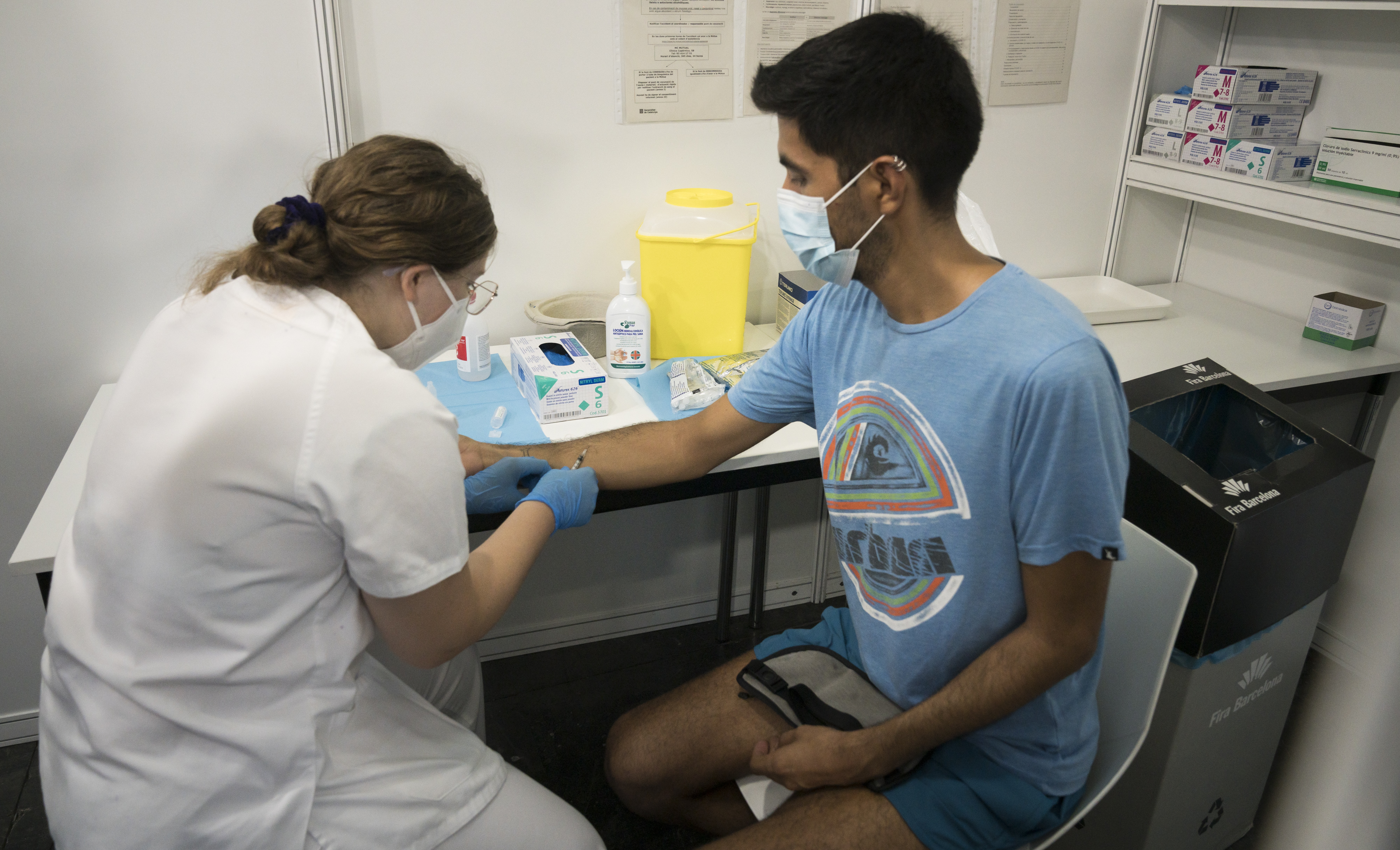 The largest outbreak of monkeypox that the world has ever experienced, with more than 68,000 cases in 105 countries and 23 deaths, enters its fifth month of development amid the hope and concern of most experts, governments and health organizations. The drop in new diagnoses recorded in recent weeks, from 1,000 daily in August to about 500 today, has reassured those who have been watching the spread of the disease since May with bewilderment. But the virus continues to circulate and the number of available vaccines is far below what is needed, fueling fears of a rebound that will make the disease endemic across much of the globe.

“The trend is encouraging. But this is not the time for any country or population group to take it for granted that the situation will continue to improve. You have to continue doing what has been shown to work.” With these words, Tedros Adhanom Ghebreyesus, director general of the World Health Organization (WHO), summarized last week the current situation of the outbreak. On July 23, the agency declared monkeypox an international public health emergency, a consideration that until then only polio and coronavirus had.

Monkeypox is an infectious disease caused by a virus whose reservoir is small mammals in central and western Africa, from which it jumps sporadically to larger species and humans. The disease causes fever, aches and a characteristic skin rash that the body overcomes in most cases in two or three weeks. But almost half of those affected require medical assistance to mitigate the severe pain it causes and, in some cases, the infection leads to complications such as encephalitis that can be fatal even in previously healthy people.

Until last May, the virus had not shown a great ability to spread from person to person. It caused outbreaks intermittently in endemic areas, but the chains of transmission were not very long and tended to be self-limited. In recent months, however, the pathogen has been shown to be efficiently transmitted between men who have sex with other men in environments where multiple sexual partners are common. Monkeypox is not considered a sexually transmitted disease —although several ongoing investigations could change this position—, but it is considered that the close contact typical of sexual relations facilitates contagion.

According to experts, the decrease in cases recorded in recent weeks is not due so much to vaccines – availability is still very low – but to the self-protection measures adopted by the people most exposed to the virus. “Those who maintained risky practices have understood the importance of taking care of themselves. At first it took a while, but there was no precedent for such a high transmission of this virus. We have seen how our patients avoid some behaviors, comply with isolation and go to the doctor at the slightest suspicion of having symptoms, ”explains Santiago Moreno, head of the infectious diseases service at the Ramón y Cajal Hospital (Madrid).

Madrid and Catalonia are the communities most affected by the current outbreak and account for two thirds of the 7,149 confirmed by the Ministry of Health. “Very important work has been done with associations and NGOs. We have managed to stabilize the situation, almost control it. We are registering about five cases a day compared to 50 in early July. The strategy of offering the pre-exposure vaccine to risk groups has also helped in this result”, summarizes a spokesperson for the Ministry of Health of the Community of Madrid.

According to Health data, 96.1% of the cases diagnosed in Spain on which information is available have been in “men who had had sexual relations with other men”, 2.4% in “heterosexual men”, and 1.4% “heterosexual women”. A fact highlighted by all the experts is that “although there have been some infections in the domestic or social sphere, these have been very rare, which rules out for now that the virus circulates significantly outside risk practices,” he says. Antonio Alcamí, researcher specializing in the viruses that cause the different types of smallpox at the Higher Council for Scientific Research (CSIC).

Together with the United Kingdom, which reported the first cases in early May, Spain and Portugal were the countries that gave the current outbreak its international dimension. Madrid identified the first eight cases on May 17 and from then on the diagnoses did not stop growing, first at a rate of a dozen cases a day and then about 40 a day in June, until reaching a peak around 10 May. July, with 175 daily cases on average. According to Health data, in those weeks there were several events that acted as supercontagors. The most important were Gay Pride in Maspalomas (83 cases), Torremolinos (60), Sitges (37), “various events in Barcelona” (156) and Madrid (123). In recent days, the number of new diagnoses is around twenty. So far, two people have died in Spain due to monkeypox and a third has died with the infection but from other causes.

The researchers agree that, despite the observed decline, it is early to consider the outbreak controlled. “The risk of doing it is important, there are still many infections,” says Carlos Maluquer de Motes, professor of molecular virology at the University of Surrey (United Kingdom) and an expert in smallpox. One reason is that the virus has only recently jumped from its reservoir to humans and may still be adapting. “The R [el número de personas a las que contagia cada caso positivo] it is around 1, much less explosive than that of the coronavirus. But this means that, if it is not controlled and continues to circulate, the transmission chains are very long. Each contagion gives the virus an opportunity to adapt, develop mutations, infect other tissues or do it more efficiently, ”he says.

A second reason would be more social. “The number of cases is going down because the messages to the community of men who maintain relationships with other men have managed to reduce risky practices. A study by the United States Center for Disease Control (CDC) reveals that almost half of them have reduced the number of sexual partners after the outbreak of the outbreak. But this is not very sustainable in the long term, precautions tend to relax and there comes a time when the disease is no longer perceived as a great risk, which leads to a new rise in infections”, adds Maluquer de Motes.

Experts also focus on the great differences between countries. Those that suffered first – Spain, the United Kingdom, Canada, Germany, France and Portugal – have strong public health systems and have had more time to work with the most affected groups, in addition to administering the few vaccines available. In them, with some differences, infections rose sharply in May and June, reached their peak in July and since then they have achieved a decrease in the number of new cases.

Cases took longer to take off in the United States, in part because the virus arrived in the country later through travelers from the areas with the highest incidence and in part because of problems in the deployment of diagnostic tests. There the peak was reached in mid-August, with more than 500 cases a day, and since then the trend has been downward to the current 200.

The WHO has been more concerned in recent days about the situation in Latin American countries. In Brazil, which reached its peak earlier this month, the downward trend is barely perceptible, and in countries such as Mexico, Colombia, Peru and Chile, the number of infections is still growing or stable. Africa, finally, suffers from all the shortcomings that spurred the WHO to declare an international health emergency on July 23: weakened health systems, few data on the real incidence of the disease and an absolute lack of vaccines.

In this situation, experts point out, the percentage of the population protected against the virus is very small and, without greater availability of vaccines —Bavarian Nordic, the only manufacturer of the serum, does not expect to be in a position to increase production significantly until next year—the risk of new chains of contagion in all countries remains high.

The investigations carried out to date have so far not found large mutations in the virus, which, being of the DNA type, is larger and less likely to undergo sudden genetic changes such as RNAs (the coronavirus, for example). “Yes, a genetic reorganization has been observed at the ends of the chains, although we still do not know the impact that this has. We have also discovered a high viral load in other parts of the body, in addition to skin wounds, such as in the throat, mucous membranes, semen and feces. It is a more systemic infection than we thought. More studies are still needed to understand if this increases the risk of contagion, but it is not good news that the virus continues to circulate. The great danger is that we are giving the virus the opportunity to change and adapt better to human beings”, concludes Antonio Alcamí.

Carbon Footprint: This Is What Pollutes Your Home (Before It's Even Built)