There is an update available at MoMA. The Museum of Modern Art in New York will put 29 works from its collection up for auction this fall and the money raised (between 70 and 100 million dollars, the intermediaries of the sale calculate), will be used for the digital transition of the art center. The set that leaves the American collection is about a third of the legacy received at the death of CBS founder William Paley, who left the museum 81 highly valuable pieces, paintings and sculptures that include names such as Picasso and Francis Bacon.

These two artists provide the most important pieces of the operation; a sale at Sotheby’s in London scheduled for October 14. One of his cubist guitars, from 1919, will be released by the artist from Malaga (from 20 million). From the tortured British painter, a small-format triptych from 1953, entitled Three Studies for Portrait of Henrietta Moraes (35 million). 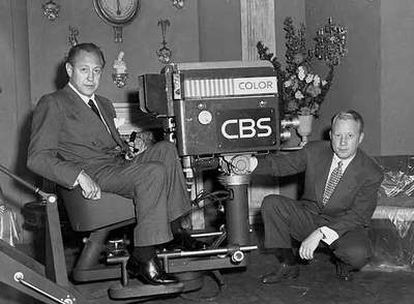 William S. Paley and Frank Stanton (right), with one of the first CBS cameras, in 1951. ASSOCIATED PRESS

Most of the money will be used to deepen the digitization of the museum, according to the Wall Street Journal, after confirming it with sources from the Paley foundation and with the director of the center, Glenn D. Lowry. The New York financial newspaper speculates that there are plans to launch its own streaming channel and to improve the digital art collection, possibly NFT. Since its foundation in 1929, MoMA is the kind of institution that marks the path that the others end up following, so the gesture transcends the mere economic operation.

Paley’s history with the museum is long: he joined the board in 1937. He was a great collector of contemporary art when it was not yet considered a chic must-have among the wealthy. He went on to be president and chairman emeritus of MoMA’s governing body, so when he died his legacy was not exactly a surprise, nor was it that he donated it unconditionally. The museum was authorized to keep the works but also, if necessary, to sell them. The Paley Foundation, in which his son Bill is involved as vice president, has participated in the operation, also in the selection of the works that will come out of the museum. In addition to the Picasso and the bacon, the lot includes Renoir paintings, a Fauvist-era derain, and a Henri Rousseau canvas, as well as sculptures by Rodin and Maillol.

In the museum’s plans for the money obtained from the sale is also joining the uncertain revolution of the NFT, works of digital art that, to use a pecuniary simile, are to an impressionist painting what a bitcoin is to a mountain of banknotes. legal course.

The pandemic altered the museum system as we knew it, far beyond the break it forced them to. After the reopening of its doors (the MoMA opted, like the rest of the American institutions, for a slow and cautious return) the public levels have not yet returned to those prior to the coronavirus; visits have fallen by 40% in the New York institution.

The covid put the centers before the mirror of their digitization. All launched to offer online exhibitions, talks by Zoom, podcasts and guided tours with streaming curators. This also allowed them to realize that not everything goes in the virtual world, which is the same as saying that everything costs. Hence, the MoMA is ready to exchange jewels of the old tangible art for the urgency of updating its digital image.

Subscribe here to the ‘newsletter’ of EL PAÍS America and receive all the key information on current affairs in the region.