Modern and creative, London Fashion Week goes ahead with solvency in the midst of mourning for Queen Elizabeth II

On Friday, September 9, hours after the two weeks of mourning for the death of Elizabeth II were announced, two of the great claims of this London fashion week, Burberry and Raf Simons, canceled their parades. The first, as an official supplier of the British royal house, has postponed its show to the 26th of this month —the only day off between the catwalks of Milan and Paris—; the second was suspended for having devised a presentation in the form of a collective party. Public celebrations have been banned for the past 10 days.

That weekend, the British Fashion Council, the government body that regulates and supports British fashion and organizes fashion week, met with designers and their press agencies to decide whether or not to go ahead with the shows. Most of the creators who parade in those days are emerging or medium-sized brands that can only present their collections with the financing and logistics of the BFC, and the international press, private clients and shop buyers already had the tickets of plane and hotels booked. Brexit has already hit British fashion enough, so they decided to go ahead, canceling the parties of firms such as Prada or Hugo Boss, changing the agenda and respecting Monday the 19th, the day of the queen’s state funeral. “It has been a titanic effort, because we had to change the days and locations of the shows in record time, but all the designers and brands have been willing to collaborate and give in,” says Caroline Rush, CEO of the British Fashion Council.

On Wednesday, September 14, a collective email from the organization urged attendees to “go to London to support the talent of its designers” and asked them to “respect the city’s moment of mourning.” During the four days that the fashion week has lasted, from Friday to this Tuesday, there has been a minute of silence every day in the parades at eight in the afternoon. Other brands, such as Paul and Joe or Rejina Pyo, have also decided to start their shows in this way, with hundreds of guests in strict silence who, in most cases, arrived by public transport due to crowds and power outages. traffic. The BFC gave attendees a voucher to travel free on a public bicycle.

On the catwalk there were, obviously, explicit signs of mourning: Erdem dyed the last suits that paraded through the corridors of the British Museum black. The designer signed a magnificent collection inspired by the art of restoration —which had the collaboration of the main restorers of London museums—, with pieces that evoked toiles or prototypes or garments that seemed to age in certain areas.

JW Anderson, who was returning to the British capital after three years of absence, closed her parade with a dress in which the name of Queen Elizabeth and the dates of her birth and death could be read, using the same typography of the posters that populated London. The Northern Irishman chose an arcade a few meters from his store in Soho, a place that he combined perfectly with his proposal: playful and surreal. As has been the case with her work at Loewe for three seasons, three-dimensional shapes (this time made of metallic balls), trompe l’oeil (dresses that simulate fish tanks) and the amplified volumes of sweaters and dresses form the backbone of a collection that, however, is much more accessible and commercial than those exhibited with the Spanish brand.

The other long-awaited return from London, after a three-year hiatus, has been that of Christopher Kane, who moved to the imposing Roundhouse concert hall in Camden to remind attendees why after almost two decades designing his, it is still a style unique. In his collection for next spring were all his curious obsessions: fetish garments mixed with romantic pieces, metal applications, distorted prints, draped silks mixed with plastic and, in short, the exploration of how pattern making and materials transform and reinterpret the femenine body.

Four of the proposals from Christopher Kane’s spring/summer 2023 collection, at his show in London on September 18. Tim Whitby (getty images

British fashion exports to the world the idea of ​​modernity and creativity without restrictions. They do not need to pull from the usual dynamics in this industry to show that they live in the present. There are no grand parades or nods to the metaverse here, but they magically make many of the first-time names seem established in just a couple of seasons. It has happened on this occasion with the last two LVMH awards, Nensi Dojaka and SS Daley. Both have been awarded the world’s most prestigious award for emerging design in 2021 and 2022, respectively, but it seems that they have always been there, despite having only four or five collections under their belts. The first, known for its tight-fitting dresses full of openings and laces, has taken a new step in its evolution with pieces that almost for the first time came out of the color black and that mixed transparencies with corsetry. The casting of models (Emily Ratajkowski, Vittoria Ceretti, Paloma Elsesser…) is perhaps the most obvious proof of the dazzling success of this very young Albanian designer.

Steven Stokey Daley hasn’t even turned 30 yet, but his parade in the halls of the Renaissance hotel was one of the most anticipated on the calendar. The brand new LVMH award, until now focused on men, presented for the first time a mixed collection in the usual format: an emotional parade as a play performed by actors from the National Youth Theater who, on this occasion, recited love letters between the writers Vita Sackville West and Violet Trefusis. How could it be otherwise, the collection revolved around gender fluidity seen from the perspective of Daley —and his stylist, Harry Lambert, architect of singer Harry Styles’ wardrobe—, that is, the subversive use of codes British aesthetics, from school uniforms and the countryside to Savile Row tailoring. 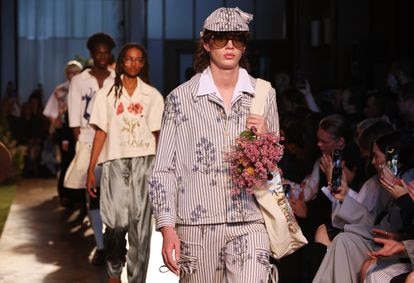 New names on the calendar, like Chopova Lowena, who rides between Baltic folklore and punk by recycling old fabrics and debuted with a highly acclaimed show, and Chet Lo, who grew up inside the Fashion East talent incubator and whose spiked dresses point have captivated the cerebrities, they show that, despite this having been a bumpy edition, London can continue exporting its avant-garde idea to the world with total solvency. The BFC has obviously decided that these days of parades will be closed tonight by Richard Quinn, the designer who received the Queen Elizabeth II Award for British Design in 2018 from the queen herself; an image that at the time went around the world.

How authoritarian countries use surveillance technology from China

The ‘tax crisis’ reaches the Valencian Parliament: the PP will require Puig to lower them now

Alternative to China: iPhone 14 is also built in India

Robberies, stabbings and riots: the images of chaos at the Mercé festivities in Barcelona

Qualcomm: A central computer for all tasks in the car