Survivors 2022 It is becoming one of the most followed editions of recent times. And it is not leaving anyone absolutely indifferent. One of the most striking plots is the one starring Anabel Pantoja and Yulen Pereira. So much so that Mercedes Dear He has not hesitated to speak out on the matter.

Many are the people who believe that this romance is nothing more than a “folder” within this reality show. But there are so many other people who have positioned themselves in favor of that love. A clear example is found in Mercedes Milá who, through her social networks, has publicly supported Anabel Pantoja and Yulen Pereira.

The mythical presenter of Big Brother blindly believes in the love that the fencer and the Andalusian feel. In fact, through an Instagram story of hers, she posted the following message: “Is it so difficult to understand that Anabel and Yulen are living a beautiful love story in Survivors?” 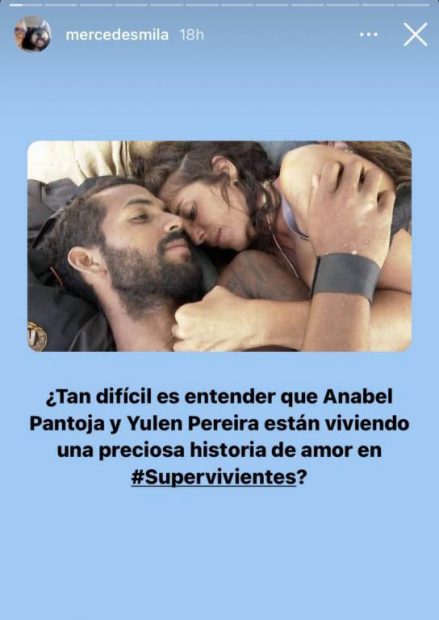 Far from everything being there, the journalist wanted to be even more forceful: “It is so clear what is happening to them that only people who have experienced something similar are capable of showing solidarity with them and enjoying what they are so generously showing us.”. A few words that, of course, have not left anyone indifferent.

Mercedes Milá, in turn, has made it clear that she is fascinated by the continuous gestures of complicity between the contestants of Survivors 2022: “Their smile, their giggles, their looks, their hugs when waking up wrapped in blankets, their nervous gestures when one or the other is in a difficult moment of the program.”

In addition, it adds: “Even his vocabulary that has been evolving completely naturally. All that is the photography of love». As if that were not enough, he wanted to take the opportunity to show his disagreement with the contest of Kiko Matamoros, a collaborator of Save me: “I have not been able to understand what had to happen to that man to have such a bitter, difficult, negative character, so in need of conquering a slave to give meaning to his days.”

Anabel Pantoja and Yulen share one of their most intimate moments in Honduras, with their nude bath#HondurasConnection11🌴❤https://t.co/MwAP4japl2