Argentine, American and Canadian paleontologists present today a new species of giant carnivorous dinosaur: the Meraxes gigas. It was found in 2012 in the province of Neuquén, in Argentine Patagonia, but its complete description has now been published in the specialized journal Current Biology.

The species belongs to the family of carcharodontosaurids, the largest predators that dominated almost all continents during part of the Cretaceous, between 100 and 90 million years ago. Like all theropods, they had short arms, light bones and bipedal movement. The members of this particular family were the longest of the group: between 12 and 13 meters from the snout to the tip of the tail. One of the most distinctive features were the teeth: curved and with sharp denticles. As pruning saws up to 10 centimeters. The name comes, in fact, from the Greek Carcharodontosaurus, which means lizard with shark teeth. Weighing more than four tons, “the great dinosaur eater”, as the press release in Spanish qualifies this new species, was one of the largest carnivorous lizards in South America.

The paleontologist Juan Ignacio Canale, a researcher at the National Council for Scientific and Technical Research of Argentina (CONICET) and the National University of Río Negro (first author of 10 who sign the article) reminded him of a specific dragon. “I proposed the name because I love the Song of Ice and Fire saga,” he admits in a video call from wintry Patagonia. He refers to the literary work that inspired the hit series Game of Thrones. “I love the names George RR Martin chose for his dragons and this one fit the bill because the shape is quite similar: a very large reptile with a giant skull. Also because in Neuquén there were already two giant carcharodontosaurs: Giganotosaurus carolinii –the ‘villain’ of the last Jurassic World– and Mapusaurus. This would be the third, like the dragons in the story, which were also three”, he explains.

The greatest work was in the description and conclusions they managed to reach after a decade of research financed by the municipality of El Chocón -the town in the province of Neuquén richest in fossils-, National Geographic and the American Field Museum, of Chicago. The find itself was quick. On the first day of the campaign they saw a vertebra of the back exposed in the dirt. “We started digging and more and more bones appeared. It was a hit ”, celebrates Canale. “We found a skull without the mandible but with the maxilla and some teeth.” In reality, they are incipient teeth because dinosaurs – like crocodiles and unlike humans – had several dental generations throughout their lives. The one of this Meraxes reached 45 years of age, which makes it one of the oldest carnivores found so far.

The specimen also preserves almost complete arm and leg bones, “which is very novel because in general the last carcharodontosaurs that reached the largest sizes in the Middle Cretaceous and the first part of the Late Cretaceous generally have very little preserved, both the feet like the arms. Thanks to that luck, another of the distinctive characteristics of this species could be seen: a powerful claw on the inner toe of the legs, which far exceeds the other two in size and sharpness. 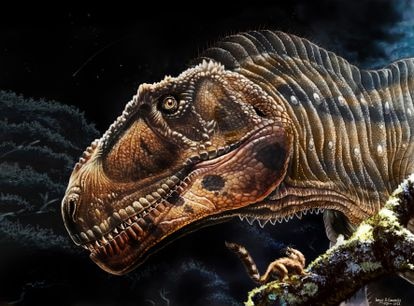 The ‘Meraxes giga’ had a skull 1.27 meters long and it is possible that it had ornamentation in the area of ​​​​the snout and around the eyes, like many other carcharodontosaurids.JORGE GONZÁLEZ

The hip also has its stamp. On the back, above the waist, there are thorns that are reminiscent of the hump of the Concavenator, found in 2015 in Cuenca. Honoring the literary inspiration of the name, the press release presents it as “the saddle of Queen Rhaenys Tarharyen”, since the dragon that the monarch commands in the original work is called Meraxes.

The skull is another gem. In addition to being huge, it is the most complete of the members of the group found so far and shows highly ornamented bones, with bumps, ridges and grooves. These pieces allow them to extract valuable information not only about the Meraxes but about all the species of the family, such as the famous Giganotosaurus.

“It gives us a lot of information about what the anatomy was like. In the case of the arms, we saw that they were very small, something that was suspected but that we can now say with measurements.” What the analysis allows us to affirm is that, like other groups of already known carnivores –such as tyrannosaurs and abelisaurs– the reduction of the arms was progressive until it represented a proportion of 40% of the size of the femur. There it stopped. They don’t know the reason. “The question is why that limit is established. Why couldn’t they be reduced even more. Why does it stop there? The proportion of that limit is similar in all of them”, the South American scientist reels. Because with each discovery some answers appear, but many more questions.

The team tests some hypotheses. “We observed that the pectoral girdle, which is where the arm, the scapula and other bones are inserted, is not reduced together with the arm, but rather is a very large and developed bone in which a lot of musculature that goes to the extremity fits. So there is a limit to which it can be reduced because that muscle has to be inserted somewhere. We think the limit has to do with that. Beyond being reduced, they fulfilled some function and somewhere all that musculature originating in the scapula had to be inserted. Because every muscle that is born in one place must have a final destination in which to insert itself. The usefulness of such short limbs is still controversial. To support themselves during copulation, to tear prey or simply to avoid falling face down on the ground. The thing here is that the size of the arms doesn’t seem that relevant when you have a huge skull. The Meraxes gigas was 1.27 meters long. Other known carcharodontosaurus were also big-headed, such as Tyrannosaurus rex (1.40 meters) and Giganotosaurus carolinii (1.63 meters). “Everything that any carnivorous hunting animal could have done with its arms, this one would have done with its head: grab the prey, manipulate it, hold it against the ground, kill it,” explains Canale. The arms, therefore, would not have been of much use at mealtimes. Especially to try to eat other giants like the Argentinosaurus, one of the largest herbivores in the history of planet Earth. “Surely it is no coincidence that carnivores and larger herbivores have coexisted. There is likely to be a relationship in the food chain. It is like an arms race: the prey grow in size as a method of defense against their predators and these in turn also grow to be able to hunt them”, compares the paleontologist. 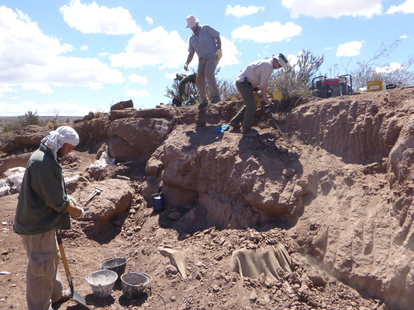 Argentine, American and Canadian scientists found the fossils of the ‘Meraxes gigas’ in 2012, in the province of Neuquén, Argentina.AKIKO SHINYA

By comparing with other coexisting species, they can know how the evolutionary end of the carcharodontosaur family was. In the same geological formation – between 93 and 96 million years old, a not very long time in planetary terms – two other species had already been found: mapusaurus and taurovenator. “This leads us to suggest that before becoming extinct they reached a peak of diversity. It was a group that diversified a lot just before its extinction. There they end and stop occupying the place of top land predators of their time in South America”. Later, the abelisaurids and megaraptors would succeed them, but that’s another story.

The scientific team is completed by the Argentineans Sebastián Apesteguía, Pablo Gallina, Alejandro Haluza and Federico Gianechini; the Americans Jonathan Mitchell, Nathan Smith, Akiko Shinya and Peter Macovicky and the Canadian Thomas Cullen. Together they plan to turn to more complex techniques such as CT scans and detailed reconstructions to get closer to the answers they are still seeking about the bones, muscles and general anatomy of this Fire and Ice dragon.

Hit on the Pogacar table: stage and leadership in the Tour