NASA’s Perseverance rover has collected the first rock sample on Mars in the Jezero crater delta it was sent to explore. NASA said so, and also released a photo of the sample taken by the rover before safely stowed away. Meanwhile, the small helicopter Ingenuity parked not far away has to wait a little longer before it can take off again. It is currently winter in the region and there is a particularly large amount of dust in the atmosphere, which is why the sunlight is not yet sufficient to sufficiently charge your batteries. If the weather permits, the helicopter should take off again in August.

Perseverance arrived at the delta after a forced march in the spring and has been exploring its foothills in small stages ever since. He repeatedly examined the subsoil to find a worthwhile place to take a soil sample. NASA now explains that the first stones splintered too easily or could not be drilled safely for other reasons. The taking of the sample called “Swift Run” then went smoothly, with a length of 6.7 cm it was also the longest rock sample collected so far.

So while the rover works unchecked, Ingenuity has to pause for several weeks. Due to the current adverse weather conditions, the helicopter cannot charge its batteries sufficiently during the day to keep warm on the Martian nights. That’s why Ingenuity shuts down at night and cools down to -80°C. In addition, after the failure of a tilt sensor, a software patch was installed at the beginning of June. On June 11, the helicopter completed its 29th flight and had flown to a location where it could maintain better radio contact with Perseverance. In total, the flown distance is now more than seven kilometers, and Ingenuity has flown more than 55 minutes. 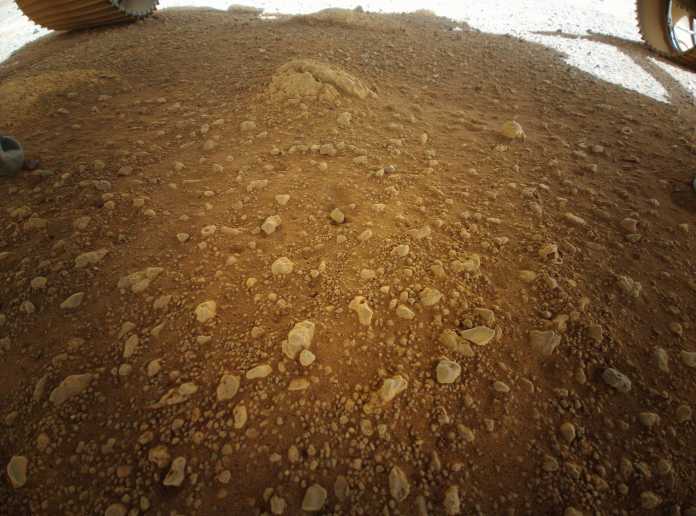 Perseverance and Ingenuity landed on Mars in February 2021. Perseverance is to search for traces of possible life there in a former delta and, among other things, collect rock samples that are to be brought to earth as part of another mission. Ingenuity, on the other hand, should only prove that motorized aircraft can take off there at all. He delivered that demonstration with the historic first powered flight on Mars, and after several more flights, NASA decided not to abandon Ingenuity as originally planned. Ingenuity has accompanied the rover ever since.