Mario García Romo, medalist in 1,500m: “In the coming years I will fight for everything” 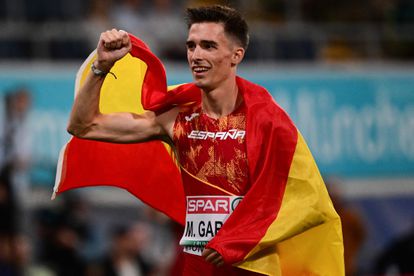 In a family from Villar de Gallimazo, 200 inhabitants, Castile and dry land, cereal, it is not scary to dream. Mario García Romo’s father is a bricklayer. An admirable profession. A magician. A person capable of thinking of a house and building it with his own hands and his work, of transforming his dream, his idea, into something tangible, touchable, solid. You can walk down the street, point to it and say, I made that house. The son goes running in the field, and dreams, and his dreams are castles in the air, in his imagination, illusions: he tried to imagine running in an Olympic stadium before a shrieking audience that applauds him excitedly. And win. And when that moment came, when Thursday night came, before the Munich final, he found himself remembering the boy he imagined to be there. Half of that dream has been achieved by his son running in large stadiums, fourth in a World Cup, bronze medalist in a European at 1,500m, the most aristocratic distance of the program. “Y, yes”, he admits, and it is hard to hear him because the stadium, where the interview is taking place, is a clamor, and a Spaniard, Manuel Guijarro, is crossing the finish line first to classify the Spanish 4x400m relay for the final of the Saturday. “What my father has achieved, coming out of nowhere, is so important that the Olympic gold I dream of achieving, or more.” To get closer to him, Mario García Romo, 23, left for the United States five years ago. He chose the University of Mississippi, in Oxford, not because it gave him the best sports scholarship, but because after analyzing everything he decided that it was the one with the best middle-distance group, the one that best allowed him to share his competition program with those of the Spanish calendar. All thought. All meditated.

Ask. Did you have to do a lot of thinking to choose the tactics for Thursday’s final?

P. And seeing Ingebrigtsen shooting from the first lap, so much left over, would surely give him hope, he would think that he would not hold out…

R. Well, that’s what I wanted to think. In fact, I saw myself with options even with 350, 300 meters to go, when I saw that I put one more gear and he left as if he were rolling, training. But hey, he’s the Olympic champion, so he’s the best in the world right now. He is not the best in the world, in theory [no ganó el Mundial], but for me it is the best in the world. The good thing is that we have a reference to work with and I think that in the coming years I will focus on that.

Q. The Cannibal Jakob. Can you be an athlete without aspiring to win the best? To be the best?

A. No, for me a bronze tastes better than a silver when I know that I have fought for gold, and although I fell a little far yesterday, I believe that this will give me a lot of experience and will allow me to fight for it. gold and I think I can improve a lot, I can improve many aspects that the truth is that they have been very difficult to work on this year, but, well, I think that in the next ones I will be closer to him and I will be able to fight for the best gold.

P. Have you always been so rational?

P. Have everything studied, meditated, without being carried away by emotions, calculated…

R. I think that to be successful in sport you have to know yourself a lot, know how to control situations and have the determination that you have to come and fight for everything. If we come for silver only in the end we end up running worse than if we fight for gold. That is the mentality that you have to have, the mentality that I have learned from many Spanish athletes. Rafael Nadal is not going to Roland Garros to finish second or get into the final only, he is going to win. You have to have those people as a reference.

Q. When you used to run in the fields around your town as a child, did you have a dreamy soul? Was he letting go?

R. The good thing about being in such a small town is that you have a lot of time to be with yourself, and, especially in athletics, you lived the solitude of the long-distance runner, the middle-distance runner. I tried to imagine myself in this scenario now, and in fact many times before those races, in the World Cup and here, I was thinking about my town, when I imagined running in a full stadium, and trying to fight for medals. And the good thing is that now I’m living it. For now, the injuries have spared me and I have been able to train as well as possible and arrive in the best shape for these championships, which I think is the luck that I have also had, and I hope it continues to repeat itself.

Q. Why did you go to the United States, where you graduated in Chemistry?

R. When I was 18 years old my goal was sports, but we all know that sports is a very fragile thing. There is no security at any time. You never know what is going to happen. And above all, I wanted to enjoy the experience of running in college. My brother had been there, and I was excited to represent Spain in the NCAA, run championships there, meet people, learn a new language. And that was the most important reason for me to go to the United States, and also to train in a more comfortable way and combine it with training and others. But mostly it was for the first reason.

P. There, in 2020, he had to spend only the year of the pandemic. Did the experience accelerate your maturity?

R. It was a tough year, really, because I was away from home for a long time, 12 months to be exact. The good thing is that I was with my friends and I knew how to use that time to get to know myself a little, to be more comfortable with myself, and, above all, also to be able to focus on being happy and enjoying athletics, which I think was the important. It was a trip with my friends, a friendship trip, and the truth is that I learned a lot.

Q. A voyage of discovery.

A. Yes, discovery. I was going to say spiritual, but it was more of a journey for that, to discover myself and above all to find out what my personality was and what my goals were for the coming years.

Q. Does what you found square with On, the Swiss sneaker brand’s training group run by Dathan Ritzenheim? His philosophy of him?

A. Well, I like to think of On as a family, but a family that demands results, that we try to be precise, with that Swiss perfection. These last few months that I have been with them have been incredible, they have supported me a lot and above all I really want to start working with them more closely in Boulder, in the mountains of Colorado, and to be able to train with people like Oli Hoare, who, well, he’s the champion of the commonwealth. And I think if we work together we can beat Jakob. I think we can be at least one of the two Olympic champions or world champions in the next few years. I am lucky to be able to work with them, and we are going to make the most of it.

R. In a week, vacations, yes. And then I’m moving to Boulder so I can be training there with them. I’m really looking forward to it because I think it’s an impressive and incredible place to train and I’m lucky to be able to do it, so I’ll try to take advantage of it.

Q. Do you have the schedule for next season in mind? cross? Indoor track?

R. That is a bit up in the air right now, because after such a long season we are going to prioritize recovering, having a good base and above all trying to prepare for next year. Where things are decided is here on the track, in August and July, and you have to try to get to those months as best as possible, so I’ll try to simply focus on that and then as things go, we’ll decide.

Q. Colorado is the land of millionaires…

A. Yes, yes. But the truth is that it is an area of ​​very active people, of very close people and when I was able to visit it I really liked how they treated me and that is why I decided to go there too because I think it is a wonderful place to live. A life more European than American, I think. And that is why it will be very good for me to be there.

Q. What does The Hobbit tell you, the book you are reading?

R. In Tolkien’s hobbit, although I haven’t finished the book I have seen the movie, the hobbits and dwarves end up winning. I think it’s a long-term story. I think someone said that it’s good that they think I’m going to give joy in the coming years and the truth is that I want to feel that and I want to think about it, that this is simply one more step along the way and that in the coming years I’m going to be able to fight for everything. What is the important.

P. Not so much having the ring, the power, but knowing how to use it.

The most effective administrations in Malaga to purchase Christmas Lottery