Mac & i issue 5/2022 is now available in well-stocked newsagents – and of course still in the heise shop – either on paper (postage free until October 13) or as a PDF. The topics:

Unlike usual, this year’s operating system updates are immediately recognizable – such as iOS 16 on the changed lock screen or macOS Ventura and iPadOS 16 on the new Stage Manager. But they have much more to offer, including lots of new useful functions that are fun or improve productivity. Mac & i shows in 67 tips where to find them.

iOS 16 not only brings many new improvements for users, it also supplements or improves a large number of business functions on iPhones and iPads that administrators should know: from new declarative device management to data protection functions and more IT security.

Apple once again launched a veritable product firework display in September: the iPhone 14 Pro and iPhone 14 Pro Max are alluring with always-on displays, 48-megapixel cameras, “Dynamic Island” and new accident functions. But what are they good for in practice ? Can the standard models also convince? And who can still get by with an older device? Mac & i provides the answers.

In 2022, however, a lot happened with the Apple Watches – and yet a lot turned out differently than expected or desired by some prospective buyers: Apple caused a stir with the Watch Ultra. Inge Schwabe tested the new outdoor design watch as well as the updates to the previous lines.

How secure are Mac, iPad and iPhone?

At least since the last known security gaps, which were exploited by attackers, owners of Macs and iOS devices are again unsure what risks there are and how they should behave in case of doubt. Wolfgang Kreutz (formerly Reszel) provides answers to the most important questions, such as: Should I generally install updates as quickly as possible? My data was encrypted by ransomware, should I pay the ransom? Should I install a virus scanner? Or also: Should I use an account without admin rights in everyday life on the Mac?

In macOS 13 and iOS 16, Apple has once again put higher fences around its users and their data: deeper insight into login items, protection against malicious USB accessories, passkeys instead of insecure passwords and a blocking mode are just a few of the comprehensive security innovations. Mark Zimmermann explains how to use the functions and gives the details. 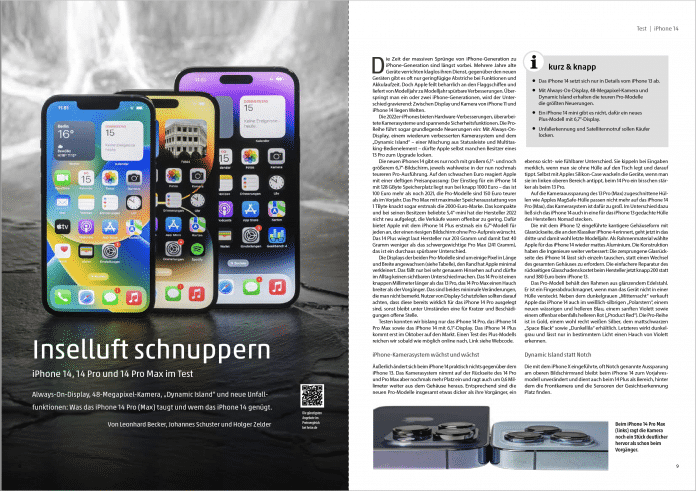 With the Apple devices, you can not only shoot and edit photos. iPhones and iPads are also wonderful tools when taking photos – regardless of whether you use an expensive system camera or a cheap iPhone SE. With a handful of apps and simple but effective tips from Sebastian Trepesch, your pictures will be even more impressive.

Siri is far from finished learning. New capabilities are added, known ones are improved by the manufacturer. On the other hand, the smart assistant with not so smart answers sometimes drives the user to despair. For Mac & i, Siri had to complete a marathon of questions – and the competition from Google and Amazon at the same time. We also give many practical tips for setting up and using the voice assistants.

What’s the name of this song? The iPhone has long provided the answer on demand. Behind the function is the popular service Shazam, which Apple took over in the summer of 2018 and integrated into Siri and iOS. With the ShazamKit API, third-party apps have also been able to use music recognition since 2021. Jürgen Schuck shows those interested in technology how the algorithm works and programmers how to use ShazamKit for their own purposes.

It doesn’t always have to be Swift or SwiftUI to program apps for Apple devices. With Flutter from Google, a real alternative has established itself in recent years, which also serves several platforms: iOS, macOS, Android, Linux, Windows and web browsers. Flutter was around when Apple released SwiftUI, and the two are actually quite similar in parts. With a small practical example, Pascal Friedrich and Klaus Rodewig take a close look at the open source framework.

Although the new AirPods Pro 2 look almost the same as before, Apple wants to have changed a few things under the hood: they should sound better, absorb noise better and be easier to find. In the laboratory, Holger Zelder pursued these promises.

Would you like to unlock the apartment without a key and open the front door to children or guests on the go? With a smart lock, you can do this conveniently with your iPhone or watch – either automatically, via an app or with a voice command to Siri. But which lock drive is the best? Johannes Schuster tested eight smart door locks with an iPhone app.

With the Forerunner 955 Solar, Garmin is primarily addressing runners and triathletes, and with the Enduro 2 Ultra, athletes who need to be able to rely on the GPS and the endurance of their training computer for many hours or even days under sometimes adverse conditions. Inge Schwabe compared both with the Apple Watch Ultra.

Whether Mac mini, Mac Pro or Mac Studio: A desktop Mac needs a monitor. But as a MacBook or iMac owner, you also benefit from a large (second) screen in the office and in the home office. Is the high price for an Apple display worth it, or can another brand do the trick? How do you set up the monitor ergonomically and what else should you pay attention to?

When the weather is nice, you spend a lot of time outside. So it makes sense to decorate the garden, terrace or balcony with your own photos. But the weather is getting worse. Some service providers advertise that their prints not only withstand the sun, but also wind and rain. How well does that really work? And what should you consider when hanging the pictures outdoors?

Apple has been working on its ambitious Titan car project for years. However, the launch of an Apple car that is to drive fully automatically is still not in sight, also because fundamental technical problems have not been clarified. With the software solution CarPlay, however, Apple is making good progress. Christoph Dernbach summarizes the state of affairs for both.

Happy Birthday iPhone! With the first iPhone 15 years ago, Apple broke new ground and put the fate of the entire company on one card. Imitators were quick to spot, and Steve Jobs’ “thermonuclear war” against Android couldn’t change that. Leo Becker takes a look back at the eventful introduction of the most successful product in the history of technology.

As always, the new issue also contains lots of tips and tricks, tests of apps, accessories and games. Mac & i issue 5/2022 can also be read in the browser, as a PDF or prepared for reading on iPhone and iPad, Android devices and Kindle Fire in the Mac & i apps. Subscribers already have it in their hands, and Plus subscribers have the paper and digital editions, enriched with bonus material, an interactive reading mode and a search function, among other things.