The new Mac & i 3/22 is now also available in well-stocked newsagents – and of course still in the Heise Shop, either on paper (free shipping until June 9th) or as a PDF. The topics:

Get rid of iCloud

Apple’s iCloud, which is free in the basic version, undoubtedly has many advantages, but accumulates a considerable amount of data. Although Apple always insists that it attaches great importance to security and respects the privacy of its customers, many are skeptical about iCloud. We keep getting questions from readers about how they can do without the iCloud without any disadvantages. In surveys by Mac & i, a large number of participants said they distrust no other Apple product or service as much as iCloud.

The reservations cannot be dismissed out of hand, because Apple automatically activates the iCloud when setting up a device as soon as you enter your Apple ID in the first query of the system. The servers are not located in data protection-friendly Europe, but in the USA. iOS backups are not end-to-end encrypted and can therefore be spied on. In certain cases, Apple is forced to release its users’ data to the authorities. Criminals are also constantly trying to get hold of the data. In the past, there have often been reports of hackers who, for example, used phishing attacks to access photos from the iCloud.

In issue 3/22, Mac & i addresses the question of how to get rid of the iCloud. One article, which describes the dangerous backup gap, which is always the basis for hacks, has already been sent to subscribers in advance. In the other, the editors show how you can replace the iCloud with other solutions step by step.

VPN: Secure through the network

With a VPN, you can transfer confidential data anonymously and securely from any public WLAN, bypass annoying geoblocks on streaming services and log into your employer’s company network from your home office as if you were there. Mac & i shows what’s behind VPN and how it differs from Apple Private Relay.

Numerous offers promise to surf the Internet undetected and safely with a Mac, iPhone or iPad and to bypass geo-blockades. Read in the next issue how you can find the right service for you and what free offers can do.

When you’re on vacation, just pull a film from your home NAS or save photos, take a look at the heating control or surf safely on public WiFi: All of this is very easy when a Mac or iPhone and a Fritzbox combine to form a virtual private network – even for free. Issue 3/22 says how. 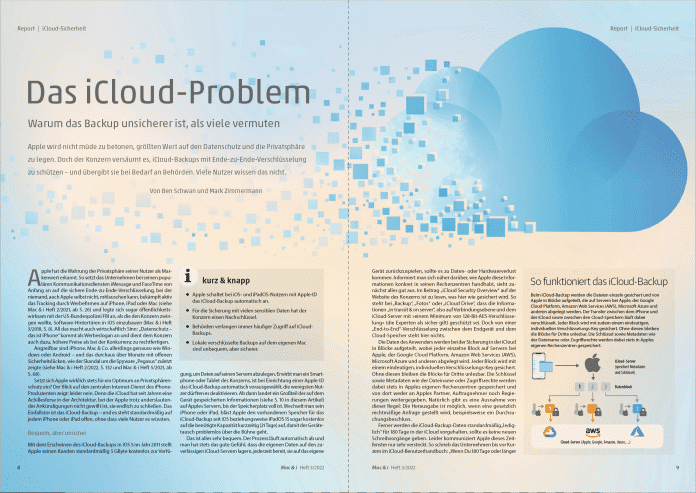 More detailed maps with buildings, clearer navigation, augmented reality pedestrian routes and great 3D street views: Apple has improved its maps from the ground up and implemented important features. The new cards have also recently been available in Germany. We looked at them in detail, worked out the advantages and disadvantages compared to Google Maps and examined the background.

The time and technical effort involved in manually managing and maintaining Apple devices should not be underestimated. Updates in particular take a lot of time, especially when several iPhones and iPads have to be updated in parallel. With the Apple Configurator 2 you can set up, manage and even repair devices both in the company and privately, for example for family members. With the free tool, you can update software, install apps and configuration profiles, and define background images – but you can also access device information or documents using a cable. Mac & i subscribers have also received this article in advance.

Hardly any user still works without a password manager. But instead of trusting your passwords to the proprietary vaults of providers like 1Password, EnPass, LastPass or Apple, you can also use the open and tried and tested KeePass. Here you are free to choose whether and with which cloud provider you store your encrypted data for synchronization. You can also switch to another compatible password manager at any time. Mac & i shows how to move to KeePass and presents programs that are particularly well integrated into the Apple cosmos.

eSIM and dual SIM function are an integral part of newer iPhones. That’s not just practical for being reachable on two phone numbers: everyone can use it to flexibly use different networks, surf the web when travelling, use the best possible data connection and save money. 7 tips cover, among other things, how to set up the eSIM on the iPhone and configure the dual SIM function correctly, how to switch between the lines, book data volume on the eSIM when throttling, convert a SIM card into an eSIM , surf comfortably when traveling and save a lot of money with two tariffs. Of course, Mac & i also shows where and how you can get an eSIM.

Better holiday videos with the iPhone

“How was your vacation?” The best way to convey an idea of ​​your own trip is with a video. Only this should not be lame and amateurish, but rather impressive. Mac & i shows how to record stylish videos with the iPhone. Our tips will give your little work a professional touch, even if you’re not a pro. In the next issue of Mac & i, part 2 will provide tips on video editing with iMovie.

Questions and answers about charging batteries

Plug in, off you go: in principle, charging the iPhone, iPad, MacBook and Apple’s small devices is simple. But the devil is in the details. We answer the most important questions on the topic. For example: Is fast charging unhealthy for a battery? Can I leave an Apple device plugged in permanently or will that damage the battery? Should you calibrate it regularly by completely discharging and charging it? Or also: What should you look out for when buying an iPhone power supply?

Again and again macOS upgrades cause problems with the printer at home or in the office. Devices that just worked wonderfully suddenly produce faulty printouts or can no longer be addressed. Luckily there are ways and means: Mac & i shows how to solve driver problems on the Mac.

In the series “How does it actually work…?” this time it’s about the SSD, after all it’s used in all recent Macs as mass storage instead of a hard drive. The SSD has no mechanical components and works much faster. However, a number of special features are worth noting.

The Developer’s Corner is dedicated to the Xcode Cloud in issue 3/22: Apple is finally providing a platform for Continues Integration (CI) and Continues Delivery (CD) that developers can configure and operate directly from Xcode. Our look at the new platform shows how well Xcode, Xcode Cloud and Apple’s App Store Connect service interact with each other.

Charge iPhone, Watch and AirPods at once

The unequal ratio of rising living costs, which wages can hardly keep up with, restricts everyone’s financial leeway. A tax return can give you some breathing space, because if it is successful, the tax office will refund part of the money paid. Five programs for the Mac – fedoco tax return, tax savings declaration, WISO tax, SteuerGo and SteuerBot – support you with helpful tips or intelligent questions to maneuver you through the thicket of forms. We compared them with each other.

Water your garden smartly and conveniently

When on holiday, the garden threatens to run out of water during dry periods. Smart valves take over the irrigation on command from outside or according to a schedule. Some also pause them when the online weather report or soil sensor reports enough moisture. In the Mac & i test garden, five irrigation systems with an iPhone connection had to show what they were capable of: Cloudrain Smart Garden Ventil, Eve Aqua, Gardena Water Control, Gardena Smart Irrigation Control and the affordable Pearl Royal Gardineer.

All health data on the iPhone: EMR

Health transparent and safe: The electronic patient record (ePA) should finally take off in 2022. The health insurance company stores doctor’s letters, laboratory results, vaccinations, medication plans and more there. Patients can view them on their iPhone and allow doctors to add to and retrieve documents. This brings order and is primarily intended to improve and secure one’s own medical care. Mac & i investigates interesting questions such as: How can one apply for the ePA? is she sure Can every doctor access all data? Can I also upload documents myself? What about data protection? And: is the ePA any good or is there still room for improvement?

How the EU is enforcing alternative app stores

The European Union’s Digital Markets Act is intended to put Apple and “Big Tech” in their place: Alternative app stores and sideloading on iPhone and iPad, selection dialogs for standard services, new in-app payment options and messages from iMessage to Threema are just a few of them radical changes that the proposed EU law could bring to iPhones and iPads. Mac & i has researched what drives those involved.

When the iPhone is taking up too much time

With clever tricks, apps and services keep users captive in their offers. As a counterpoint, digital minimalism is spreading; his sympathizers want to find a thoughtful use of technology. Mac & i explains the movement and reveals the most important tips. Fear not, even if you are an enthusiastic follower, you can keep your iPhone and MacBook.

This success came as a surprise: Apple swept away the Oscars with the tragic comedy “Coda”, scooped up three awards – and overshadowed streaming competitors like Netflix and Amazon Prime. The success should make the bumpy start of Apple TV + forgotten. We watched the film and put together the background information.

As always, the new issue also contains lots of tips and tricks, tests of apps, accessories and games. Mac & i 3/22 can also be read in the browser, as a PDF or prepared for reading on iPhone and iPad, Android devices and Kindle Fire in the Mac & i apps. Subscribers already have it in their hands, Plus subscribers even have both the paper and the digital edition, which is enriched with bonus material, an interactive reading mode and a search function, among other things.

Russia massacres 23 people in an attack on a humanitarian convoy

Patched vulnerabilities in Firefox and Thunderbird