Life and death of an Andalusian swamp: agriculture, tourism and lack of rain dry up the La Viñuela reservoir

The La Viñuela reservoir (2,045 inhabitants), in the Axarquia region of Malaga, is dying. It is the living image of the drought that is devastating the whole of Spain, whose water reserves are the worst since 1995. The view from the viewpoint next to the road that heads towards the tiny town of Los Romanes is bleak. The slopes show the marks of previous levels, very far from the current level. It looks like a small lagoon where the cicadas sound and the sun shines brightly. On the other shore you can see the dry and cracked mud where a small pontoon with pedal boats has been stranded: a Martian object in this dry land.

It is the consequence of a deadly combination for infrastructure: population increase, increase in irrigated agricultural production —avocados and mangoes, above all— and old infrastructures that lose liquid during transportation. Evaporation is through the roof and rain isn’t helping either. In the current hydrological year it has rained half the average in the area, according to the automatic hydrological information system Hidrosur. The reservoir has reserves to reach the end of the year. And if it doesn’t rain, it will die and there will be restrictions.

Built in 1989 and with a capacity of 165 cubic hectometres, it is the largest in Malaga. Also the emptiest in Andalusia. It slightly exceeds 12% of available water, according to reports from the Andalusian Administration, which already declared its emergency situation “due to serious shortages” in November. The scarce spring rains barely recovered it and now it only has 20 cubic hectometres, of which five cannot be used due to its mixture with the mud. The remaining 15 will give until the end of the year, little more. Then it will reach what is called the dead reservoir level, when it will no longer be usable. The problem is also short-term: at the end of the month the water will be below the level of the purification plant. It will have to be pumped, with a higher energy cost.

Few remember seeing the swamp like this. “There is a lot of concern,” stresses Paula Llamas, 19, as she serves coffee in El Rincón de Sada, on the outskirts of La Viñuela, a town where nothing else is discussed. She says she doesn’t remember the water being so low in her life. In fact, it only happened when she was not born, in 1996, and then when she was five years old, in 2008. On both occasions it was filled years later thanks to the rain —in 2011 it registered its historical maximum, at 98% of its capacity— but the difference is that now this process costs more because consumption does not stop growing. Now reserves are reduced by 2.5 cubic hectometres per month. Agriculture and human consumption, especially in summer due to tourism, are the two great applicants. Also the two economic engines in the area. Added to this is the fact that the largest municipality in the region, Vélez-Málaga, with 82,967 inhabitants, has been connected to the reservoir because its wells in the Vélez River are dry. 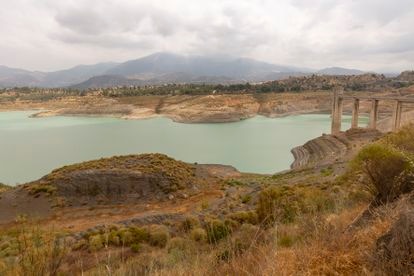 Panoramic view of the reservoir of La Viñuela (Málaga). Garcia-Santos

Four out of every five liters that leave the reservoir go to agricultural irrigation. A part for the thousand hectares of greenhouses and the majority for mangoes and avocados, a production that Malaga leads in Europe. This last fruit is the one that demands the most water and its surface has gone from 4,500 hectares to more than 7,000 so far this century. “Perhaps we have gone too far, but most are smallholdings that have allowed the region to survive,” José Campos, president of the central board of users of Sur del Guaro, acknowledged to this newspaper at the end of 2020. The remaining liter goes for consumption human from 15 localities of the Axarquia. A region with 31 municipalities that, according to data from the National Institute of Statistics (INE), has gone from having 161,231 inhabitants in 2003 to 220,369 in 2021, almost 40% more.

And tourism increases spending every summer: if in February the towns in the area consumed 1.1 cubic hectometres, in July they were 1.7, a record for the last decade, according to data from Axaragua, a public company that manages supply. The lack of maintenance of the infrastructures —old and with distribution losses— is another important factor, as is the low rainfall. The historical average (433.3 liters per square meter) has only been exceeded two years in the last decade. Evaporation due to high temperatures puts the finishing touches.

“The solution is not so far away,” says Gregorio Campos, vice president of Axaragua and mayor of Iznate, a small town of white houses with 912 inhabitants and many more subtropical trees around it. The first is to bring water from Malaga. A work promoted by the Junta de Andalucía allows it to be done since April and, although the service has been suspended since Easter due to the high demand in the capital, the flow —235 liters per second— was resumed on August 5. The second is to transfer another 200 liters per second from the aquifers of the Chíllar river, in Nerja, in the eastern area. The installation is done, but not running. “That would reduce the pressure on the swamp,” says Campos, who asks not to criminalize the field and yes to the administrations. “We have fallen asleep. From the smallest town to the Junta de Andalucía and the Government”, he assures.

Farmers already use reclaimed water. For now, timidly: 1.7 hectometers since December. Until then, the five sewage treatment plants in the region dumped into the sea the nine hectares that they had been cleaning for a decade. Farmers have always been reluctant to use it because the water is more expensive: now it is around 35 cents per cubic meter compared to five cents for that from La Viñuela. This low cost has not allowed reinvestment in the improvement of infrastructures.

Meanwhile, three companies are already studying the construction of a desalination plant, which would not arrive before four years and whose water would have an even higher cost. To avoid problems in the very short term, the Junta de Andalucía limited the water to agriculture last March. The concession fell from 4,500 cubic meters per hectare per year to 1,500, a third. It is insufficient for a sector that already cuts down avocado trees because they are not capable of surviving the drought. Meanwhile, it is intended to reduce consumption by 20% in the municipalities. To do this, the showers on the beach have been cut off, the streets are hardly washed down and the parks and gardens are watered to a minimum.

“The Andalusian administration has never controlled the conversion of rainfed hectares into irrigated land,” laments Rafael Yus, spokesman for Ecologists in Action in Axarquia, who believes the first big mistake was to bet on subtropical “crazy and with a growth bestial” in an area that receives little water. Yus abounds in the idea of ​​”poor political management” and a price of water “almost free” for the countryside. He also criticizes that “the need for a greater reserve” has “never” been foreseen. Instead, new pipelines are only run when thirsty.

“We have to be aware that the climate change models in the Mediterranean basin indicate a greater probability of episodes of extreme temperatures and less water availability,” stresses the researcher Iñaki Hormaza, from the CSIC and the University of Malaga. What then is the solution? The scientist is committed to a combination of measures: desalination of seawater with renewable energies, more efficient irrigation methods, use of precision technology, better management of plantations to increase productivity and the development of varieties that are more tolerant to drought. Meanwhile, we will have to look to the sky and trust that La Viñuela will resurrect, as it did on the two previous occasions that it came close to death.

Arrested in Madrid a person who left his spouse, sick with a number of sclerosis, to agonize to demise for 5 days

Spain investigates strep A infections in kids after UK alert