At the end of the Helmholtz project Arches (Autonomous Robotic Networks to Help Modern Societies), German scientists at the Etna volcano on the southern tip of Italy showed that robots can help explore the moon, foreign planets or asteroids. Various electronically controlled, partly mobile devices completed tasks largely independently: they took rock samples, analyzed them and forwarded the results to a control room.

This “Geological Mission I” was managed by the German Aerospace Center (DLR), which is involved in Arches with several of its own research institutions, as are the Karlsruhe Institute of Technology (KIT), the European Space Agency (ESA), the Alfred -Wegener Institute for Polar and Marine Research and the Geomar Helmholtz Center for Ocean Research. The researchers chose the Sicilian volcano for the experiments because its lava landscape is similar to the surface of the moon and was therefore well suited as a test environment.

According to them, in addition to the comparable loose, coarse-grained nature, the solidified erupted magma layers also form “realistic challenges for reconnaissance missions”. Armin Wedler, project manager at the DLR Institute of Robotics and Mechatronics, takes home from the test runs teams of mobile robots are likely to play an important role in such operations in the future. According to him, it looked like this for Mission I: Two robots were traveling together autonomously. Then there was a drone.

Robot LRU1 (Light weight rover unit 1) therefore evaluated soil samples as a “scientist” via its cameras. LRU2 took on the role of “assistant”, collecting soil samples, bringing them to the lander or analyzing them with laser-induced plasma spectroscopy (LIBS).

According to the DLR, a “powerful, pulsed laser beam is directed onto the sample”. Some of the material vaporizes, with different elements becoming recognizable in the plasma created with the specially developed LIBS solution. LRU2 also transports material boxes and tools and makes sure “that LRU1 always has WiFi”. The Ardea drone, in turn, is considered a “scout” in the team and maps the area. Due to the sometimes strong wind on Mount Etna, the capabilities of the unmanned aerial vehicle and LIBS could not have been used in all runs.

Feel for the rock samples

The scenario for Mission I was that scientists would monitor the robots’ tasks from Earth. The “Geological Mission II”, which was also tested on the volcano, was different, in which the mechanical explorers are to be controlled from a station in orbit. In addition to LRU1 and LRU2, an “Interact Rover” collects rock samples and brings them to a lander. This robot has a camera arm and a gripper arm, the latter of which can also give haptic feedback. It gives the scientists a kind of tactile feel for the rock samples.

KIT developed this element with one hand as a haptic human-machine interface. A fourth robot – the Scout Rover – is equipped with a WiFi repeater and positions itself so that Interact has continuous connection to the control room. In Mission II, however, the machines do not work independently, but are steered by an astronaut.

In the current demo, the German ex-astronaut Thomas Reiter took over this task in a specially equipped control room in the Sicilian city of Catania at the foot of Mount Etna, which was about 23 kilometers away. Mission II also served as the conclusion of ESA’s “Analog 1 campaign”. In 2019, their astronaut Luca Parmitano had already controlled the Interact Rover from the International Space Station ISS in a simulated lunar environment in the Netherlands.

The third tested scenario, the “LoFar Experiment”, dealt with the installation and maintenance of a low-frequency radio antenna field (Low-Frequency Radio Array). The LRU rover and Ardea simulated the installation of the antenna system on the far side of the moon. A corresponding radio mast could be directed from there into the depths of space. 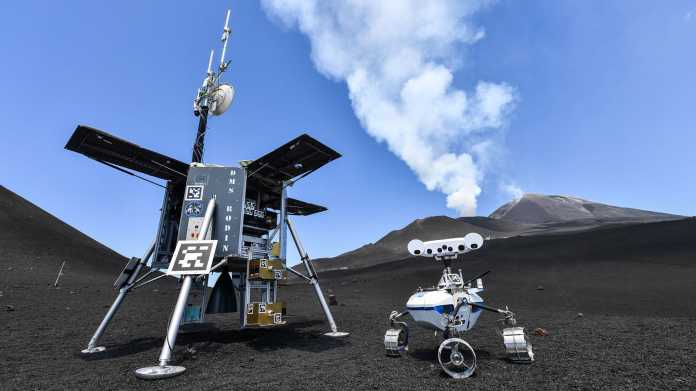 “We have gained a lot of experience that will help us in the development of future missions,” said Thomas Krüger from ESA’s Human Robot Interaction Lab. In addition to the ongoing projects, there is great promise from further cooperation in robotics, which will be based on the Arches findings. The Helmholtz “future project” has been running since 2018. In addition to the “Space” demo series on Mount Etna, a deep-sea exercise took place at the end of 2020. Five years ago, Robex also took place on the volcano for “Robotic Exploration under Extreme Conditions”.

The USA and China in particular are currently in a race to build a new lunar base with robots. NASA boss Bill Nelson was just very concerned that the Middle Kingdom “lands on the moon and says: This is ours now and you stay outside”. Asteroids are also considered a coveted object in space in western countries and in Russia, for example, in order to possibly mine mineral resources.

The left lies: Macarena Olona will register in Seville and will not receive a "bonus" of € 25,000