La Ruta already has a release date: all the details of one of the biggest bets of ATRESplayer Premium

The Route will arrive earlier than expected to ATRESplayer Premium. After finishing filming last May, Atresmedia chose an unbeatable setting such as the 70th anniversary of the San Sebastian Festival, to present and announce the premiere date of the series, which It will hit the platform on November 13.

Positioned as one of the biggest bets on the platform, La Ruta has all the ingredients to become one of the great successes of Spanish fiction in 2022. An original ATRESplayer Premium series by Caballo Fims, in which the iconic Bakalao Route will be narrated for the first time through a fictional series, with a cast of actors of the stature of Álex Monner, Ricardo Gómez, Claudia Salas, Elisabet Casanovas and Guillem Barbosa.

“It’s a unique series. All projects have their time and this has come at a fantastic timebecause we had been behind it for a long time”, said Montse García, director of fiction at Atresmedia, during the press conference for the series at the San Sebastián Festival.

Great reception by the press of the first chapter and unanimous applause at the beginning of the press conference of #LaRuta.

It is a series with a great personality, which narrates the journey of five friends from El Perelló, during the most significant years of La Ruta, which marked a before and after in Spain. A story told from front to back in time, starting in 1993 and ending in 1981, being “a journey from darkness to light” for both the protagonists and the movement.

Borja Soler, director and creator of La Ruta, explained that: «For me, as a Valencian, being able to tell this story is a responsibility. We have tried to do it with great respect, documenting ourselves with djs, artists, roadies, and all the people who were part of this scene since the early 80s. we discovered that it was much more than the image that remained of all that».

«We have left our soul doing this series. Everything comes from Borja’s initial desire to tell the route. It is a remembered series, in each chapter the most nostalgic will remember the route, discovering this group of friends and rejuvenating with them”, explained Roberto Martín Maiztegui, creator of the series. 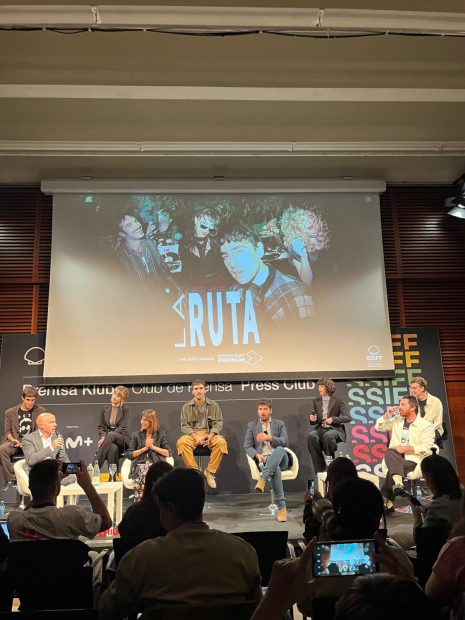 After viewing the first chapter of the series at the San Sebastian Festival, the unanimous applause of the journalists present confirmed that La Ruta is one of the most anticipated series of the year. A series full of lights and shadows that will conquer viewers from minute one.

Total, La Ruta will have eight episodes in which even the smallest detail has been taken care of. The whole team has done an exhaustive work of documentation, investigation and localizationto get as close as possible to the Valencian music scene of the 80s and 90s, as well as to recreate the artistic movement that emerged in those years with the greatest possible accuracy.

«Each chapter gives you one more piece, both of characters and of the story. It is a discovery, it was also a discovery for the whole team during filming, because we were discovering everything that was behind the route, “says Roberto Martín.

Secondly, Atresmedia already advanced that there will be a second part of La Ruta, this time set in Ibiza. Although at the moment they are still working on the idea. “We are thinking a lot about how to continue the story, because there are many paths to explore”, clarifies Borja Soler.

Leo Messi: “The one in Qatar will surely be my last World Cup”

30% of Spaniards consider that their mental health has worsened

The island of temptations: end of the boys’ bonfire and full girls’ bonfire, tonight

Versioning: More CI/CD support in VS Code for GitLab 15.4