The New York Times revealed not long ago the super contract with which PSG dissuaded Mbappé from signing for Madrid: 225 million for three years plus a bonus of 125. In light of that, it seems like a whim that puts conditions to participate in the campaigns of the brands that sponsor your team. That is where Florentino found an escape from the disappointment of not signing him: “He is no longer my Mbappé”, he came to say, in relation to the first news about such an intention.

But it is worth examining the matter more closely. His objections have been mainly to KFC and Betclic. He does not want, or his advisers do not want, to associate his name with what he considers junk food and a bookmaker, a decision that is hardly reprehensible. There is no shortage of those who maliciously suggest that behind it there is a maneuver by their advisers to sneak in other brands for their own benefit, but in any case, can a footballer be forced to participate in an advertisement for something they dislike, for any reason? That is the question posed.

Without junk food or gambling, Cruyff has already been through something like this with his own team. Cruyff had a large contract with Puma, a sportswear brand whose enmity with Adidas went beyond mere commercial rivalry, since at the head of both companies were opposing brothers. It turned out that the Dutch team contracted with Adidas and supplied the clothes with the usual three stripes on the sleeves. Cruyff refused to put it on because doing so contravened his agreement with Puma. After a long tug of war, he put it on but removed one of the three straps. That photo was famous.

The struggle of soccer players for their free will, their presence in the world of advertising had a painful precedent in France in Raymond Kopa. He is already forgetting, but Kopa was the first great French player, the origin of a line that continues in Platini, Zidane and Mbappé. Raised in the Stade de Reims, he signed him to the Bernabéu to join him with Di Stéfano in his glorious Madrid at the end of the fifties. With him he won three European Cups in a row and the Ballon d’Or in 1958, the year in which he was third in the World Cup with les bleus. His wife longed for France, but there was no way that the Stade de Reims would pay him what Madrid did until an industrialist from Angers, a great fan of his, proposed giving his name to a refreshing drink. Soon a textile industrialist launched a line of soccer clothing to which boots would later be added. And he made advertisements for all kinds of articles, including tobacco, something that would shock today but that then seemed normal. 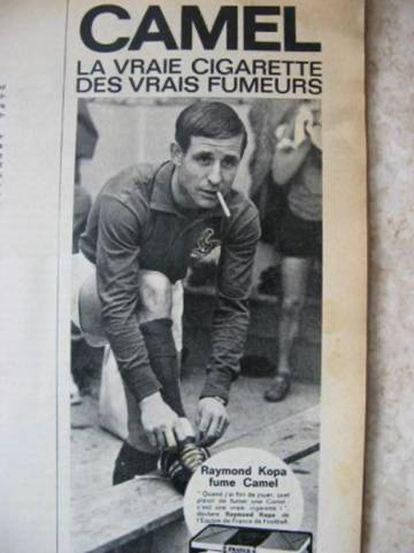 An advertisement for cigarettes with Kopa as the protagonist.

That advertising drift was frowned upon in France sixty years ago. Society saw something impure in that and although with his return the Stade de Reims won two leagues again, his own fans became unfriendly to him and the coach stopped calling him. From a spoiled child he became a rebellious figure. In July 1963 he published an article in France Dimanche under the title Players are slaves to the ball in which he attacked the lien; the Federation, after unsuccessfully demanding that he retract, suspended him for six months. He tried to go to ordinary justice but it was a sacred norm that sports lawsuits be resolved within him. During his sanction, the Stade de Reims would descend to Second.

Anathematized in his day, over the years his position was understood. He broke new ground for French footballers and laid the foundation stone for the creation of the union. And he did not have money left over and auctioned off his memories, including the Ballon d’Or. Regarding Cruyff, a fanciful partner led him to invest in pig farms and ruined him, hence he went to play in the United States. We usually reproach footballers for greed, but they live with the sword of Damocles of a premature injury, the certainty that in the best of cases their career ends before half of life and the knowledge of many colleagues who go bankrupt soon after to withdraw.

All this weighs on Mbappé’s behavior.

The dangers of the 'doctor' Tiktok: "I got hundreds of messages from very screwed up people and I'm not a psychologist"