There is always news in the Kardashian clan. Almost at the same time that this Friday, August 5, the arrival in the world of the second son of the celebrity and businesswoman Khloé Kardashian with her ex-boyfriend, the NBA player Tristan Thompson, the news of the breakup of the couple formed by the even more celebrity and also businesswoman Kim Kardashian and actor Pete Davidson. Nine months has lasted the relationship of the most famous (and richest) of the Kardashian sisters and the comedian.

The first American media to confirm the news was E! News, linked for years with the Kardashian family for their reality show. Shortly after, People magazine also confirmed the breakup. According to both media, Kardashian and Davidson have put an end to their courtship this week. Part of the reason for this breakup would be due to their two busy schedules and continuous travel. He is spending part of the summer in Australia, where he is shooting the movie Wizards! with Orlando Bloom and Naomi Scott, and she is still in Los Angeles in charge of his various businesses and with her four children. According to E! News, it has been a break agreed by both parties and both have decided to continue their relationship as friends. So far, the protagonists have not spoken about the end of their relationship. And that some had already come to give them a name as a couple: they had become the Kete, something that seems reserved for couples of great stars as at the time they were the Bennifer, then Brangelina and, now again, Bennifer.

Kardashian, 41, and Davidson, 28, became a surprise couple in October 2021. The owner of Skims had broken up her marriage a few months ago, it was February 2021 when she filed for divorce to formalize their separation Kanye West, with whom he has four children. In fact, the rapper was one of Kim Kardashian’s guests on the Saturday Night Live program when she served as presenter, precisely the October 9 episode in which she met Pete Davidson, actor of the legendary comedy show on American television until now, Well, he recently announced that he will not continue in the next season. In one of the gags on that show, dressed as Disney’s Aladdin and Jasmine, the two shared a fleeting kiss on a flying carpet.

Their first images as a couple, holding hands walking through an amusement park in California, jumped into the media a couple of weeks later. But like most celebrity couples, their beginnings were as discreet as possible, trying not to be caught by the paparazzi or by the cameras of the family reality show that at that time followed Kim Kardashian in full recording of the first season of her new show on Hulu. In fact, as the chapters progress, she ends up talking openly about the relationship, but the actor does not appear before the cameras.

In February 2022 the relationship already seemed solid (he referred to her as his “girlfriend” in an interview), and both were launched to speak publicly about the other. On March 11, the official confirmation by Kim Kardashian would arrive on her Instagram account (he does not have one), and for someone like her, with 328 million followers, that is the final officialization of her. “I guess it’s not official until you post it,” she joked a few days later during her appearance on The Ellen DeGeneres Show, “I have the cutest pictures of us and I want to be like, ‘Oh my God, we’re so cute.’ But then I say, ‘Don’t be so desperate. Don’t post so much, just take a look, ”she told the presenter. “I don’t know what’s right, I haven’t dated since before Instagram existed. Yeah, I don’t know what the rules are.” Since then, she has continued to share photos and moments of the couple’s private life on her social networks. The last one, still published on Kardashian’s profile, dates from the middle of July and, before that, in June they both went on a romantic getaway to the beach paradise of Tahiti, as she also took it upon herself to show the world.

Their first red carpet appearance together was at the White House Correspondents’ Dinner in April 2022, held in Washington. But it has not been her most popular public event by far: that would come shortly after, in the month of May on the red carpet of the Met gala in New York, the night in which she put on the Marilyn Monroe suit and that so much got to talk. 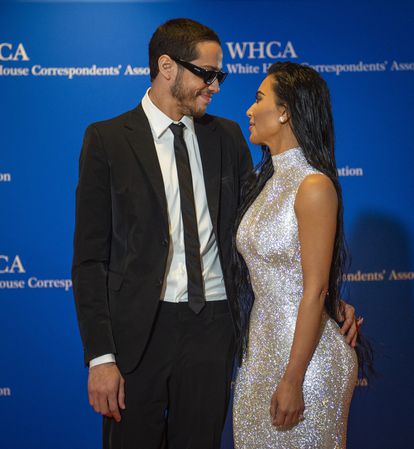 Pete Davidson and Kim Kardashian in their first appearance as a couple on a red carpet. It was on the occasion of the annual White House correspondents dinner, held in Washington on April 30, 2022. CNP (Rod Lamkey/CNP/startraksphoto.co / Cordon Press)

All this decorated with some new tattoos that Davidson has been doing in honor of his until now partner, from one that says “my girlfriend is a lawyer” (yes, Kim Kardashian is studying Law) to the words Aladdin and Jasmine written on his collarbone (which seems to be a clear reference to how they met). He also got tattoos on his body as a tribute to singer Ariana Grande, with whom the actor was engaged for four months.

How they will continue their friendship relationship in public and how they will refer to their sentimental breakup remains to be seen. Whether they do it sooner or later, he will surely appear in the second season of The Kardashians, which premieres on September 22. In the advance issued already, they are seen together in a New York hotel shortly before the famous Met gala.

Taiwan accuses China of simulating an attack on the island