Keys about the new energy saving plan: Who does it affect? what measures does it include?

Next Wednesday, August 10, is the deadline marked on the calendar for the first measures of the new energy saving plan to come into force. A package that, among other things, provides that public and private buildings reprogram the temperature of their air conditioners, turn off their windows at night and report on the reason for these changes. The objective is to begin to reduce energy consumption, as has been agreed with Brussels, in the face of the wave of inflation and a growing risk that Moscow’s threats of a total cut in gas supplies to Europe materialize. “We cannot afford to lose a single kilowatt hour,” said the Third Vice President and Minister for the Ecological Transition, Teresa Ribera, after the approval of the package, which also includes new discounts for rail transport users.

To buildings that have administrative uses (those of the Public Administration, offices, public use areas, etc.), commercial (shops, department stores, supermarkets, shopping centers), to the hotel industry ―although Ribera has clarified that they can soften some measures ―, to cultural spaces such as cinemas, auditoriums or congress centers, and to buildings intended for the transport of people such as stations and airports. It does not affect homes.

What measures does it include? 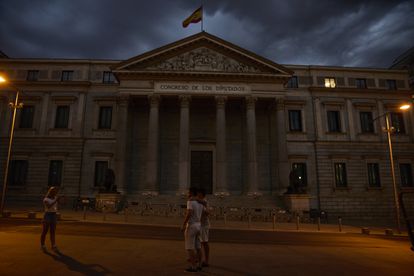 The regulation of the temperature and the switching off of shop windows and lighting will be the first measures to come into force, at midnight from Tuesday to Wednesday, that is, after seven calendar days have elapsed since the publication in the BOE of the decree that contains the plan. The air conditioning may not be lower than 27 degrees and the heating, in winter, higher than 19 degrees; relative humidity should be kept between 30% and 70%. From 10:00 p.m., the shop windows and the lighting of public buildings that are unoccupied at that time must be turned off.

There is more. By September 30, the buildings must have an automatic system for closing the doors facing the street, to prevent them from being wide open, something common in department stores, shops or bars. This obligation already existed since 2009, except for premises that are heated with renewable energy, which will now also have to be adapted. Buildings required to limit their temperature must also inform about the new saving measures through posters or screens visible from their entrance. They have until September 2 to do so. In addition, those buildings that have carried out the previous one before January 1, 2021 must carry out the energy efficiency inspection before the end of the year. The Government estimates that each degree less in the thermostat represents a saving in consumption of 7 %.

Yes. Those centers that cannot respect them due to working conditions or specificities of the sector, such as restaurant kitchens, must not comply with the temperature limits. Training centers (universities, schools, nurseries), health centers and hospitals, hairdressers and laundries, gyms, means of transport (trains, ships, planes) or hotel rooms (yes, common areas) are also excluded. the ministry.

Ribera clarified on Friday, in the face of skepticism from hoteliers and merchants and criticism from the PP communities encouraged by the Madrid president, Isabel Díaz Ayuso, that the conditions of the workers prevail over energy savings and that the plan must be applied “with flexibility ”. The decree mentions that temperature thresholds must be “adjusted” to comply with the decree on minimum health and safety provisions in workplaces. This forecasts temperatures between 17 and 27 degrees for places where sedentary work is carried out; and between 14 and 25 degrees in the case of light work, which will allow the hotel industry to lower the air to 25 degrees. The decree also excludes “those venues that justify the need to maintain special environmental conditions or have specific regulations that establish it.”

Will the monuments continue to be illuminated? Yes, in principle. The ornamental lighting of the monuments will not have to be turned off at 10:00 p.m. The ministry has summoned the autonomous communities on Tuesday to clarify the doubts. The Sagrada Familia, for example, will remain illuminated, unless the foundation that manages it decides otherwise. Also the signs and monuments that are not buildings, such as the Schweppes illuminated sign on Madrid’s Gran Vía or the Puerta de Alcalá. On the other hand, public buildings that are unoccupied at 10:00 p.m. will have to turn off their lighting. Public lighting will remain on.

Are there fines for non-compliance?

Yes, although the decree does not mention them directly. It points out that what is established in the Regulation of Thermal Installations in Buildings (RITE) will be applied, which in turn refers to the Industry Law of 1992. This establishes fines of up to 60,000 euros for minor infractions, a maximum of six million for the serious ones and 100 million for the very serious ones. Those responsible are the autonomous communities.

Ecological Transition sources recall that the sanctioning regime is applied according to criteria of proportionality. This allows us to assume that the punishments for non-compliance will be at most assimilable to a light sanction. The serious and very serious refer to dangers and damage to people, flora, fauna, things or the environment and to behaviors that put safety at risk, something that seems complicated that can occur with a violation of the safety measures. energy saving.

How long will it be in force? 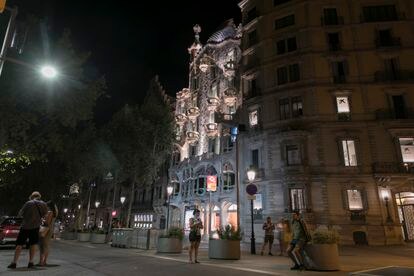 Until November 2023 – except for the automatic closing of doors, which has no end date – which indicates that the prospects are not very promising. Given the risks of gas supply cuts, Brussels has proposed to the Member States a 15% reduction in their consumption; 7% in the case of Spain and Portugal thanks to the Iberian exception. In September, the Government must send Brussels a contingency plan with more measures.

Which Renfe services will have discounts and how much?

The services with discounts are Cercanías, Media Distancia, Avant, and 13 short AVE routes. In the case of Cercanías and Media Distancia (regional) they will give the right to free unlimited trips between any origin and destination between September 1 and December 31, 2022. For Avant, a 50% discount will be applied to all multi-trip tickets Avant (Plus Card Season Ticket, Plus 10 Card or Plus 10-45 Card). AVE commercial services on 13 short routes (Madrid-Palencia; Madrid-Zamora; León-Valladolid; Burgos-Madrid; León-Palencia; Burgos-Valladolid; Ourense-Zamora; Palencia-Valladolid; Huesca-Zamora; León-Segovia; Segovia -Zamora; and Palencia-Segovia) will also have a 50% discount and can be used until January 31, 2023.

Who is entitled to transportation discounts?

All citizens, including foreign tourists.

Do I have to meet any requirements? Cercanías train in Atocha (Madrid), in a file image. Getty

Yes, the discounts are designed for “recurring” travellers, that is, those who regularly use the trains. In the case of Cercanías, they must make 16 or more trips in the four months that the voucher is valid. To guarantee it, they must pay a deposit of 10 euros when acquiring the title, which will be returned at the end of the validity period once it is verified that the number of trips has been fulfilled at the end of this year. For Media Distancia, the deposit is 20 euros and it is also necessary to make 16 trips.

How are titles obtained?

Renfe will open the registry on August 8 to be able to obtain the transport discount bonds, since the current titles are not valid. Users will be able to register from that date to obtain the cards, but the sale of the bonuses will not begin until August 24. They will be valid between September 1 and December 31, 2022 and prior registration will be mandatory. Renfe will suspend the sale of all multi-trip tickets and regular season tickets during the four months that the discounts are valid. Only single-journey or round-trip tickets will be available for sale at regular fares.

Encounters in the third phase for childhood viruses?