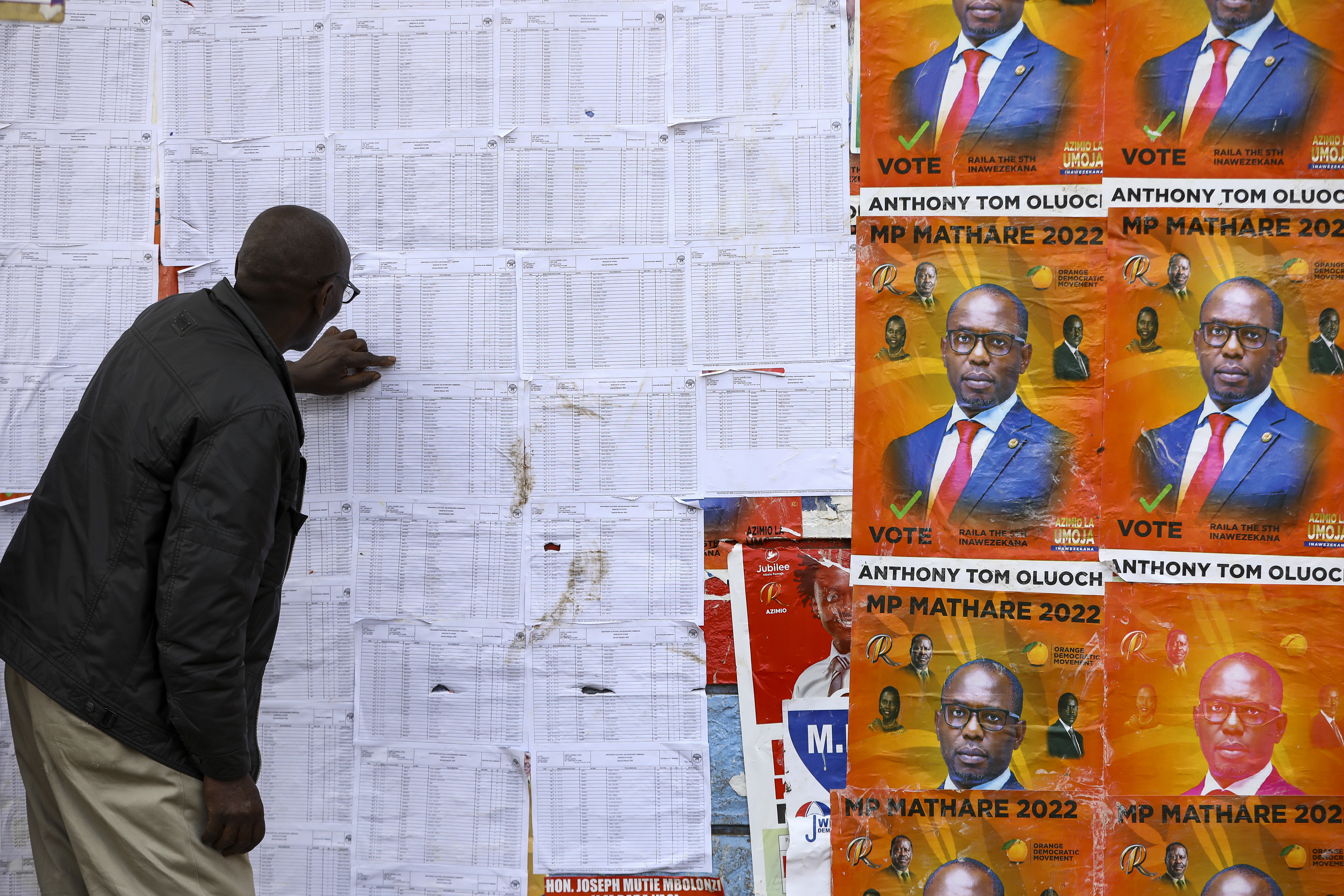 Philip Kaloki, a candidate for Nairobi’s lieutenant governor, sought last August 4 to get the vote of a hundred residents of the Pumwani slum. After almost an hour of rally, Kaloki took out a wad of bills, the shouts came and the motorcycle taxi drivers began to burn wheels. The women hid before the people scrambled over a little money. “You will tell me what 200 shillings (less than two euros) mean, people do not understand that their vote is worth more,” says neighbor Nancy Kere.

Kenya, one of the most stable countries in East Africa and the region’s economic power, is holding elections this Tuesday in which more than 22 million citizens will be able to elect all the country’s political representatives at once: in In total, more than 16,000 candidates compete for 1,882 seats in the National Assembly, the Senate and the regional chambers. Voters will also choose the 47 regional governors and Kenya’s fifth president.

At the end of July, the chief of staff of the Ministry of the Interior, Fred Matiang’i, warned that the banks were suffering from a shortage of 200-shilling notes due to the actions of the political class. The distribution of money by the candidates at the end of the rallies is a common trend in the campaign in the African country, but this year it has a more relevant weight due to the economic scarcity and the tight race for the presidency.

Four candidates compete to succeed Uhuru Kenyatta, who leaves power after two terms, as stipulated in the Constitution. But only two have real options: Raila Odinga and William Ruto. At 77 years old, the first is the eternal opponent who is running for the presidency for the fifth time, while Ruto faces his first candidacy after having been vice president with Kenyatta. The former is a slight favourite, with a six to eight percentage point lead in the most recent polls. Even so, if the forecasts come true, neither would exceed 50% of the votes and the country could go to a second round for the first time, although both could win and avoid it if they convince 9% of the undecided.

The high cost of living is the main problem for Kenyans and this has been reflected in the campaign. Both have promised money to the most vulnerable: Odinga will give 50 dollars (49 euros) to each family below the poverty level, while Ruto has assured that he will dedicate 417 million dollars to the lowest incomes. However, neither of them has given details of how he will do it.

Inflation has skyrocketed in recent months after the Russian invasion of Ukraine and reached 8.3% in July, pushed by a 15.3% rise in the food basket. Added to this is the worst drought in the last 70 years, which has left 4.1 million Kenyans food insecure. To counteract these problems, the Government has offered subsidies to oil, corn and wheat, but the pressing public debt is pressing. Kenyatta has almost tripled the GDP, but at the same time the debt has skyrocketed, which has multiplied by five to reach 72,000 million dollars, 67.5% of the GDP, which places the country as the sixth in the world with higher risk of default, according to the Bloomberg ranking.

“We have developed as a country, but people on the street wonder where the money is,” says XN Iraki, an economist at the University of Nairobi. Ordinary citizens do not feel the macroeconomic development of the country. “The Kenyan economy has prospered, but that prosperity has not been shared. That is the great challenge of the next president”, affirms Iraki. This inclusion must especially reach the youngest. The last census showed that more than a third of Kenyans under the age of 35 are unemployed and discontent is palpable in politics: despite accounting for almost three quarters of the population, young people represent less than 40% of registered voters for these elections.

The 2022 presidential race is marked by a handshake between Kenyatta and Odinga, rivals in the previous two presidential elections. The outgoing president now supports his rival instead of the one who has been his vice president: Ruto has felt betrayed and has taken advantage of this issue to outline the elections as the struggle between the elites against the popular classes.

Kenyatta and Odinga are the sons of two of the key political figures in post-independence Kenya, former President Jomo Kenyatta and opposition figure Jamarogi Oginga Odinga, while Ruto comes from humble rural origins, selling chicken on the street to truck drivers in the valley of the rift. With the logo of a wheelbarrow and a slogan (“Every fighter matters”), the vice president seeks to identify himself with that 83% of Kenyans who work in the informal sector and live day to day.

The margin of victory will be important for the loser to accept the result in a tense political environment. Any irregularity can favor rejection and the National Cohesion and Integration Commission (NCIC) puts the probability of violence after the elections at 53%.

The shantytown of Kibera, in Nairobi, was one of the hotspots of the wave of inter-ethnic violence that shook the country in 2007 and in which 1,200 people died and 350,000 were displaced. Now, for the moment, its citizens breathe calm. “There is peace of mind because there is certainty that Odinga will win. If he loses, the blow will be unexpected and there may be violence because people will believe that the result has been rigged, ”says Joe Gathecha, a resident of the place.

A majority of the Luo population lives in Kibera, a community of which Odinga is a part. However, this year, identity seems less important in the elections. For the first time there is no favorite candidate from the Kikuyu community, the largest and most powerful in the country, against which most of the attacks are directed. Both Odinga and Ruto seek to attract their votes, which has reduced ethnic tension. We will have to wait three days for the results. Meanwhile, Kenya waits tensely to find out who will be its fifth president.

Fusion reactor Wendelstein 7-X before the next experimental phase