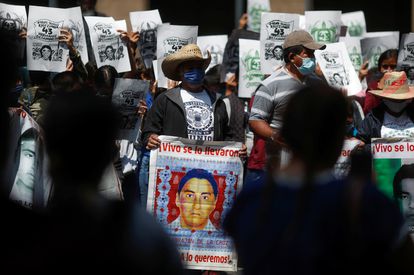 Relatives of the disappeared students from Ayotzinapa demonstrate in front of the headquarters of the Supreme Court of Justice, in Mexico City, September 23, 2020.HENRY ROMERO (Reuters)

The case against General José Rodríguez in the framework of the Ayotzinapa case is advancing, although not due to the serious accusations verbalized in recent weeks by the Government. This Wednesday, a federal judge, based in Toluca, State of Mexico, has sent the general to preventive detention for a crime of organized crime, that is, for his alleged collaboration with the Guerrero Unidos criminal group. The Attorney General’s Office (FGR) had also accused the military command of forced disappearance, a crime linked to the attack on normalist students in Iguala, Guerrero, in September 2014. It is not clear whether the judge has dismissed this accusation or the Prosecutor’s Office has withdrawn it at the last minute. With Rodríguez, there are already four military prisoners linked to the case.

Either way, the future looks bleak for the general. Three weeks ago, the Mexican government accused the command, now retired, of ordering the murder of six of the 43 missing normalistas. Undersecretary for Human Rights Alejandro Encinas said that Rodríguez, then commander of the 27th Infantry Battalion, based in Iguala, ordered the killing of the boys, held captive for days after the attack. The information that Encinas presented, based on testimonies and screenshots of messages sent by the region’s criminal network, was not yet included in the case file that the Prosecutor’s Office has put together. The investigating agency has not yet filed any charges against Rodríguez for homicide.

The case of the general shows, on the one hand, the progress in one of the most important criminal investigations in contemporary Mexico, but also the tensions within the State and its institutions. On August 19, the FGR reported that a judge had granted him 83 arrest warrants in the Ayotzinapa case, 20 of them against soldiers. One of them was Rodriguez. The agency has not reported the case again, but last week, the undersecretary of Security, Ricardo Mejía, mentioned in passing the arrest of the general and two other soldiers, in addition to the execution of the arrest warrant against a third party, who had already he was imprisoned “There are four arrest warrants,” the official said. The question now is what happens to the rest, to the other 16 soldiers that the FGR said it was looking for, for crimes of organized crime and forced disappearance.

Everything is news these days in the Ayotzinapa case. Also this Wednesday, another court, based in Tamaulipas, has acquitted 24 police officers from Iguala and Cocula of the attempted murder of normalista Aldo Gutiérrez, who was shot during the attack, allegedly at the hands of the agents. Gutiérrez was left in a coma and has not woken up again. The accusation against the policemen was in charge of the old Attorney General’s Office (PGR). The lawyers of the families of the 43 study how many of the 24 face other processes and how many could be released from prison.

Last week, the same Tamaulipas court acquitted José Luis Abarca, mayor of Iguala at the time, of kidnapping. The old PGR accused him of the kidnapping of the 43. The presidential commission investigating the case, led by Undersecretary Encinas, points to Abarca as one of those most responsible for the attack on the students. Imprisoned since 2015, Abarca will not be released from prison. The former mayor faces other processes for murder and organized crime.

Regarding the general’s case, his lawyers, Alejandro Robledo and César González, have confirmed the judge’s decision to EL PAÍS. Both have criticized that they have not been able to access the file and that they do not know exactly on what the Prosecutor’s Office bases the accusation of organized crime against the military command. They say that the testimony of the protected witness Juan, an alias that the FGR gave to Gildardo López, part of the Guerreros Unidos network, is the basis of the accusation against his client, but there could be more.

“At the reading of the accusation that was made in court last Thursday, they said only what they thought we should know,” say the lawyers. “We presented a document so that they would allow us access to all the records, to the file, but we have been denied. There are 70 volumes, but of course, we hoped that they would give us access to all the records, to the file. We have not seen the arrest warrant, nor the consignment statement, under the argument that it is under secrecy, ”they add, the latter referring to the document where the Prosecutor’s Office details the accusation. “But all this is a crime against the administration of justice because they do not allow the right to defense to be exercised,” they settle.

“Why be thrown into the meat grinder of war?”: the protests in Russia against the mobilization in Ukraine leave more than 1,300 detainees

Pere Aragonés victimizes himself and accuses Moreno of “Catalanophobia”

One step away from Madrid: this is the incredible town that is succeeding to visit for a weekend