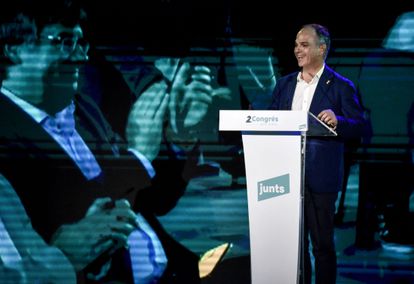 Jordi Turull, in his speech, last Saturday, after being elected in France as the new general secretary of Junts.RAYMOND ROIG (AFP)

Just three days after choosing its new leadership, Junts per Catalunya will have to make adjustments, some of them significant. Two of the candidates to occupy a seat (one of them the organization secretary, with David Torrents) failed to pass the cut of 50% of votes in the congress that was held on Saturday in France and by regulation they were ruled out. A third name, Miquel Sàmper, has fallen due to an incompatibility with public office. The spokesman for the formation, Josep Rius, explained this Tuesday that the regulations establish that the general secretary, Jordi Turull, has 30 days to propose new names to the executive and that they will seek to respect “the spirit of the initial candidacy” . Rius, however, has not clarified whether Torrents can be re-proposed with this mechanism, a personal commitment by the party’s president, Laura Borràs, and which has not seduced the militancy.

The single list that was voted last Saturday in Argelès-sur-Mer (Pyrenees-Orientales department, France) sought to be the synthesis between the positions most at odds with the State of the sector led by Borràs with the most convergent conception of power and necessity of commanding the institutions that Turull embodies. His pact managed to prevent the game from opening up in the channel, just at the moment when Carles Puigdemont took a step to the side. But the results drew a vote of punishment towards three personal bets of the also leader of the Parliament. Aurora Madaula will be vice president by the hair, thanks to a previous amendment in the regulations. But neither Torrents nor Ester Vallès had that fate and they have finally fallen.

They are not minor punishments, especially in the case of Torrents, who was called to be number three in the game. This first defeat has not gone down well with Borràs, who is now being accused by several of the party’s swordsmen of seeking formulas to keep him in his position despite the poor results. The regulation establishes that it is now Turull who must propose three names to the executive. Rius has not moved from that article, but without ruling out that the Mosso on leave and close to conspiracy thesis about the jihadist attacks in Barcelona may finally reach the leadership of the party. The spokesman has emphasized that it will be a “coherent” proposal with the pact reached between Borràs and Turull and that it “respects the spirit of unity that allowed forging that agreement.”

Saturday’s results failed to clarify the rivalry of the two sensitivities that coexist in the formation. But the problem is that, very surely, they will collide again in the negotiation of the roadmap for the next two years, which has to be approved in the second part of the congress, in July. The draft of the text, known this Tuesday, opens the door for the militancy to be consulted on the continuity of the agreement with ERC in the Government, although conditioning it to a document that, according to Rius, is still in the process of being prepared: the internal balance of one year of shared Executive.

The proposal to submit continuity in the Government to the bases of Junts was put on the table by Laura Borràs, the new president of the formation, after closing her unitary candidacy with Turull in mid-May. And although the sector that supported the secretary general may share the fund, everything indicates that it will be a thorny point during the amendment period, which closes on June 23. Rius has also avoided referring to the real scope of a proposal that appears in a “draft”, which was prepared by “a team” and which is pending the process of internal debate.

The reference to that consultation in the 45-page political roadmap is very generic and that is where, effectively, the two sensitivities may end up colliding. The paper acknowledges that the internal audit they are doing on “the degree of compliance” with the pact signed with the Republicans will have to be “assessed” and analyze “why more progress has not been made and evaluate what measures must be taken”. In this scenario, without explaining what that gradation would be, the new executive would propose to her bases “the possibility of continuing or not in the Government or taking other types of appropriate initiatives.” ERC sources expressed their surprise at this proposal, which they previously saw only as an occurrence by Borràs.

Last year, Junts asked his bases electronically about whether he should enter the Government with ERC or be in the opposition and the first option won with more than 80% of the votes. One of the great doubts about that vote was how militants who have held high positions in the Generalitat for years could be against a decision that directly affected them or precisely how that converging spirit of vocation for power would be suspended. Turull has defended this Tuesday that the militancy has the last word on “any decision, any rethinking” that the executive raises on the pacts.

Borràs has also been against the pacts with the PSC, such as the one that Junts has in the Barcelona Provincial Council. As a result of the case of espionage against independentistas with the Pegasus software, the president of the party asked to suspend any relationship with “those who spy on us.” However, the political paper, with regard to municipal issues, defends “local autonomy” to reach agreements and only suggests that pacts with independentists be given primacy.

Karaoke ‘anime’: sing for three minutes before an audience in multicolored costumes with wigs, hammers, swords and shields

The Dutch Prosecutor's Office asks for life imprisonment for the two accused of the murder of journalist Peter R. de Vries