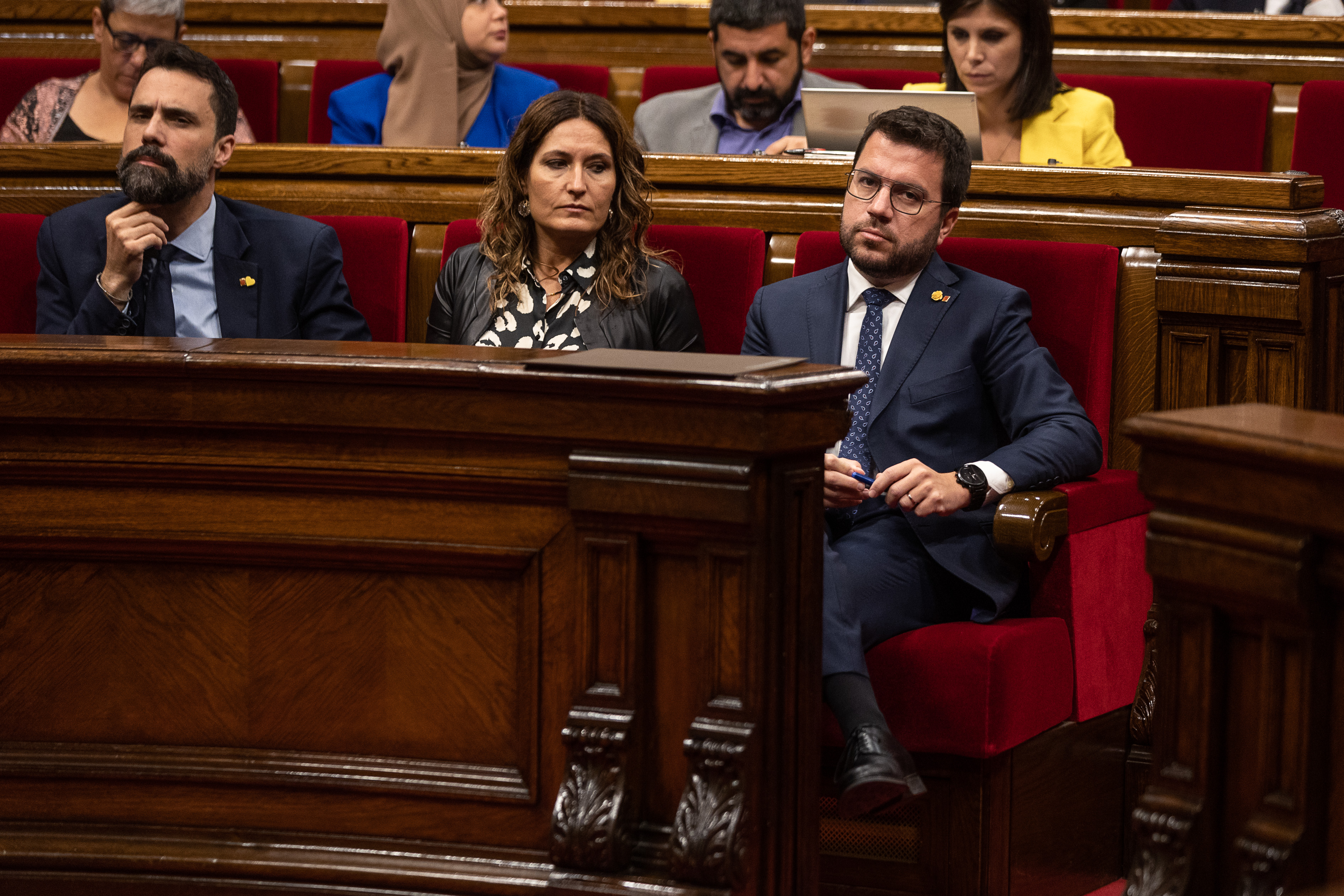 Junts per Catalunya has already delivered its proposal to the Palau de la Generalitat to redirect the crisis in the Government but its formula, far from anticipating a pact, raises tension at a time when the Catalan Executive was already on the verge of rupture. The document contains measures that Pere Aragonès will hardly accept. Initially, the text had to detail the deadlines and specifications for some points of the legislature plan to be executed, but finally the request to reinstate Vice President Jordi Puigneró has also been included. The number two of the Executive and maximum representative there of Junts had been struck down last Tuesday, in response to his party requesting in Parliament that the Republican submit to a matter of confidence. Aragonès saw in the role of Puigneró an intolerable “disloyalty”. The list of requests from those of Laura Borràs comes just after Aragonès asked them for “speed” in deciding whether or not to stay in the Government.

The decision to include the restitution complicates the possibility of reaching an agreement, since Aragonès justified the expulsion of Puigneró criticizing that he hid from him that in the General Policy Debate Junts would launch the proposal of the question of trust. The general secretary of Junts, Jordi Turull, had avoided explaining last Thursday if the return of the former head of the Territory portfolio would be included in the conditions document that would be sent to the president. Officially, since the game, all this Friday that possibility has been denied. Some voices from the party leadership clarify that the restitution would be a show of good will, but that the bulk of the document revolves around how to activate the pro-independence coordination, the unity of action in Madrid and reorient the dialogue table. Junts hoped to have an answer before Monday but Aragonés gave it to him this Friday night. In an interview in La Vanguardia, the President rejected the reinstatement of Puigneró.

The content of the proposal comes after the last session of the General Policy Debate in Parliament. In the midst of the turmoil that is collapsing relations between Esquerra and Junts – partners of convenience in the Generalitat – Aragonès has taken the floor this Friday morning in an extraordinary way to issue an ultimatum to its partners: leave the Government or stay, but decide quickly. “Everyone has to make decisions quickly,” warned the president. The speech gave a public reply to the umpteenth threat of Junts per Catalunya which, after meeting its executive in a marathon session on Thursday, raised the possibility of leaving the Government, although it postponed it while waiting for its militancy to vote for it in an internal consultation on days 6 and 7. For Aragonès, the Government cannot remain in the current provisional situation, which this Friday has been displayed in the Parlament with Puigneró’s chair empty.

Aragonès has highlighted that it is necessary to resolve “urgent and structural issues”. He pointed the finger at Junts when he claimed to be able to have a solid Government to deal with an autumn-winter season that promises to be very complicated. He has pointed out that it is a “priority” for the Government to maintain the current composition, but he admits that his powers on this issue are finite: “There are decisions that do not depend on me.” In this sense, before a possible departure of Junts from the Executive, the Republican leader has emphasized: “Above all, my priority is to serve the citizens, with a compact Government focused on providing answers”.

Esquerra did not want to vote on the Aragonès plan to create a social fund of 300 million euros or the clarity agreement to be able to hold an agreed referendum. In fact, it has been the commons who have defended it. The project, defended by the commons, generated coldness in Junts, who voted abstention. Despite their poor relationship and strategic differences, the two pro-independence parties have indeed shaken hands by approving a proposal, presented by Junts, and which claims to vindicate the results of the consultation on October 1, 2017, “a legal and legitimate referendum ”, reads the text. The proposal received 64 votes in favor -from ERC and Junts-; 60 against and 9 abstentions (CUP).

The resolution vindicates that consultation, which was declared illegal by the Constitutional Court, as a valid tool for “unilateralism and disobedience”, in order to achieve “independence and build the republic”. In the calculation of the votes, the Republican Alba Vergés has considered the vote of the deputy Lluís Puig, who fled to Belgium from Spanish justice, as valid. The Parliament’s lawyers warned at the Table that the first point of the proposal contravened the doctrine of the Constitutional Court and that it has issued nine resolutions since 2017 in that regard. ERC and Junts decided to admit the text for processing against the criteria of the Socialists. Citizens presented a reconsideration to stop the processing that was also dismissed.

During the debate, the opposition has attacked the Executive by terminating the coalition. The Government is “in discount time”, Salvador Illa has assessed. The leader of the PSC has reminded Aragonès that “he was invested without winning the elections” – the socialist list was the most voted in the March 2021 elections – and has reproached him for wasting his mandate: “The Government does not govern and wastes citizens’ time”, he said. “It is a hindrance for Catalonia”. Albert Batet, president of the Junts group, began his speech by giving “support” to the vice president dismissed by Aragonès – they have not looked for a replacement for him – and has staged an outstretched hand to mend the tear between Esquerra and Junts: “We have time to fix it , for us it will not remain”.

In Comú Podem, for its part, it has announced that it is freezing the negotiations it had with the Government to validate the budgets. The support of the commons is announced as essential to approve the accounts, since the CUP has already closed the door to join the pro-independence duo. The deputy of the CUP Laia Estrada has described the permanent conflict between Esquerra and Junts as a “pathetic and unfortunate spectacle”. The anti-capitalist policy has accused Junts of bluffing ―“it has already been seen that he does not have much will to leave the Government”― and has synthesized the conflict between partners calling it a “fight for power”.

The crisis of the Government has monopolized the start of the plenary session this Friday, with a cataract of criticism. “Democracy has won the pulse of their anti-democratic project”, highlighted Carlos Carrizosa, from Ciudadanos. The PP deputy Alejandro Fernández has demanded responsibility: “Catalonia cannot spend a whole week waiting for Junts to decide what they want to be when they grow up”, he has said.