Juanes gives everything at the Botánico: cumbia, ballads and even metal

Are cover albums a symptom of artistic weakness? More than one has thought about it, perhaps on occasion with good reason: if ideas run out in the first person and the muses persevere in giving pumpkins, there is always the option of embracing the repertoire of others, imbuing it with something of their own personality, constructing a discourse on how much we owe to mentors and referents, and buy time while inspiration deigns to lay down its escapism.

All of this may be true, but listening to how Juanes was screaming his head off recreating Love After Love, the classic by Fito Páez that served to inaugurate his visit to the Nights of the Botánico this Friday, it is hard to believe that mistrust and skepticism are applicable in your case. This guy has faith in others, but even more confidence in himself: enough to dare to wear a gold suit that any superstitious person would attribute bad luck; or inject a point of rock electricity into La bilirubina, Juan Luis Guerra’s great song, and come out of the stake well. Even without the irresistible metals of the original.

It is difficult to have a grudge against Juan Esteban Aristizábal, this Medellin native who never got to go to his head with nonsense, and that in twenty-odd years he has blown up a few illustrious stadiums and venues. On the contrary, he joked about starting him with foreign artillery as soon as he went to the crowded esplanade. “What’s wrong with this furry one, who is singing other people’s music?” He exclaimed, making fun of his own cross-dressing. Even more so when at this point he has an authentic arsenal of autographed triumphs: any of you (take the test) know more songs by Juanes than he imagines.

Completed the ritual of reviewing the last album, that Origin around those artists who inspired him so much, the Colombian gave himself with joy to the review of his most illustrious titles. He seemed happy, full, plenty of arguments for seduction and very well wrapped in a band that works like a clock. Excited about a reunion that took a long time. Hence that feeling of burning ships, not sparing sweat, fervor, mileage or empathy. There were no surprises either, such as the appearance of Ana Guerra from Tenerife to support the joyous Photography, in which they included a paradiña in the middle of the piece so that the parish could sing it loudly. 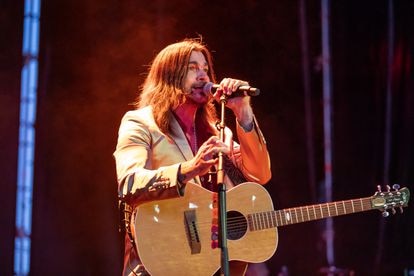 Juanes, during the concert at the Botanical Garden this Friday. Víctor Moreno (Botanical Nights)

“We had taken everything for granted. The smile, the hugs, even the concerts ”, this lush and jovial hairy man was sincere to almost 50 of him; Guitarist more than remarkable (enough to listen to him during Gotas de agua dulce or Enamores Me, very agile in both), entertaining composer, tropical rocker under his skin of heartthrob in love. And paradigm of the good people: the one that in Colombia, Sebastopol, Pernambuco or right here we need so much.

Juanes El Intachable appeared in Spain with his wife and children, acting as loving father and husband, and he had the blessed nose to sing Para tu amor among the crowd, completely alone with his guitar; asking permission, with moving humility, to make room for him on the dance floor. Too bad that precisely that song incurs an excess of unnecessary and infrequent molasses in his catalog: we can love our offspring very much without having to get so smug.

The initial set of versions returned, to come full circle, in the very same encores. Without measuring distances, that canonical vallenato of Diomedes Díaz that the boy Juanes sang when he was just eight years old, preceded Y nos nos fue las ten, with the occasional rush to memorize those kilometer-long lyrics by maestro Sabina. But the surprise would come with the transition, without hesitation or bad conscience, from the Mexican Juan Gabriel (Querida) to Metallica’s Enter Sandman. It would be easy to notice that Juan Esteban is a few light millennia away from Kirk Hammett, but he resolved the issue with a raw, motley and very dignified sound.

There were so many, so many people on the campus of Madrid’s University City, almost 3,800 people, that there was barely room for all that swaying that under any other circumstance would have been non-negotiable. By some generous design of the gods, Colombians come into the world with a qualification for rhythmic body movement that is unattainable for the common earthling. This time the countrymen of Juanes could not exhibit his hip rotation before the rest of his peers, but the one from Medellín was in charge of throwing compliments to all the flags and nationalities that he glimpsed from the box. He not only gave everything musically; he also knew how to please rolos and paisas, veterans and neophytes, locals and foreigners. And, incidentally, he showed that the world does not need reggaeton to be happy. How not to love him.

Mbappé rides to the Golden Boot

Vera Pauw, former Dutch player, denounces having been a victim of sexual violence by Federation employees