Juan del Val and Nuria Roca They have become one of the most established couples on the television grid. As members of the Atresmedia staff, the couple He has revealed on several occasions some details of his sentimental relationshipwhich they have been forging for many years.

At the time, they revealed that they maintain an open relationship. But recently the writer has made a confession about the passion he continues to have in his marriage. Some statements with which he showed his most personal side and was honest about it as a family man.

Taking advantage of the visit of Melani Olivares, who was going to present her play ‘Sexual comedy for a summer night’, the collaborator of ‘La Roca’ gave his opinion on love and how he sees that feeling. «Falling in love is a state of alienation»he opined. “In which you could not live a lifetime”answered Antonia San Juan.

«I would love to, but it is true that it would be very sacrificed. Exhausting”added Nuria Roca for her part. «I tell you one thing, the desire can be perfectly maintained after many years, I guarantee it»Juan del Val confessed. Some words that left no one indifferent and with which he alluded to his marriage to Roca. 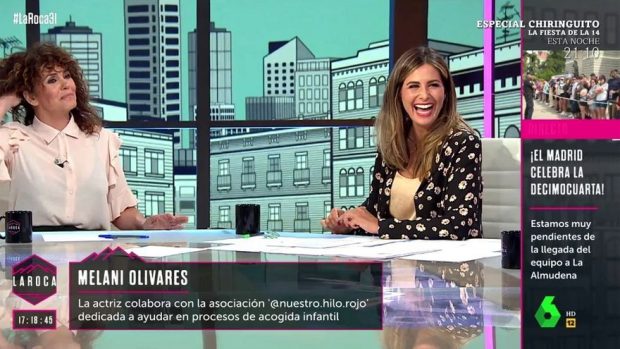 «No, I do know. I know from the girl, she always comes very relaxed »San Juan replied, referring to the presenter. “It seems to me that all relationships are structured based on possession, even if you don’t want to. To a greater or lesser degree», continued explaining the writer. “And this I think is a mistake, but it is what it is,” he added.

«For those who live it well, great. That bores me a lot”, replied Melani Olivares for her part. «Desire is something individual, and from being individual, you want who you want», Juan del Val continued explaining. «We are all individual beings, even if we are in a couple», Nuria Roca added in this regard. «When you have a partner there is possession and it is already like you are one. To hell, sorry, “said the guest actress.