Lately, the life of the American singer and actress Jennifer Lopez seems to be full of special dates and big announcements. If on Saturday, July 16, the artist married actor Ben Affleck in Las Vegas, on Sunday, July 24, the interpreter of Let’s get loud took advantage of her 53rd birthday to present JLo Body, a new body cream from her cosmetic line JLo Beauty. “There are so many exciting things happening these days and as you all know… I am always full of surprises which I love to share with you first. Last weekend was obviously one of the biggest, but definitely not the last. As you know, today is my birthday, so I thought I’d share another little secret with you, my most loyal followers. So here it is…” Lopez wrote in her latest newsletter, On The JLo.

“I’m the age I am, but I feel incredible and I’m happier than ever,” the interpreter pointed out in an interview with People magazine in connection with the new release. In addition to announcing that her businesses are growing through that weekly newsletter, Lopez has shared the photo of her posing nude and the video presenting the product’s advertising campaign through her Instagram account, in which she reaches 219 million of followers. “I think you can look good and feel great and sexy at any age. I don’t like the phrase ‘You’re okay to be 40, or 30, or 50’. Why not just say: ‘You’re fine’? ”, added the artist in People.

The latest novelty in her cosmetic line was not the only interesting thing that happened on her birthday. If last year Lopez blew out her 52 sails sailing in the waters of the French Côte d’Azur with Ben Affleck, in 2022 the destination has been Paris. The couple, who announced their engagement last April after having resumed their relationship in early 2021, almost two decades after breaking their first wedding plans, have chosen the French capital for their honeymoon, after saying “yes, I want” on July 16 in Las Vegas.

Since last Thursday, July 21, Lopez and Affleck have been seen walking through the streets and bridges of Paris, around the Louvre and Orsay museums, going out for lunch and dinner together, even going shopping for the city’s department stores and cruise down the Seine River. 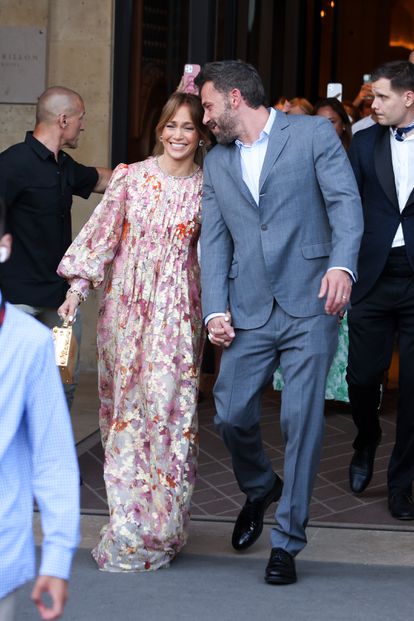 The first of the images of Jennifer Lopez and Ben Affleck in the French capital, in an affectionate attitude and kissing, was last Thursday at a dinner at the Le Matignon restaurant. Another idyllic picture of Beniffer —an affectionate name and nickname for the couple— has been seen next to the gardens of the Elysée Palace, where the protagonist of Argo and the New York singer could be seen walking, photographing and kissing like two more lovers.

They have not been alone on the trip, since their daughters have accompanied them: Seraphina and Violet Affleck, 16 and 13 years old, that the interpreter of Good Will Hunting had with actress Jennifer Garner —married in 2005 and divorced in 2018, they had three children together—; and Emme Muñiz, 14, that the On the Floor singer had with Marc Anthony. Lopez and the interpreter were married from 2004 to 2011, and had twins, Max and Emma. 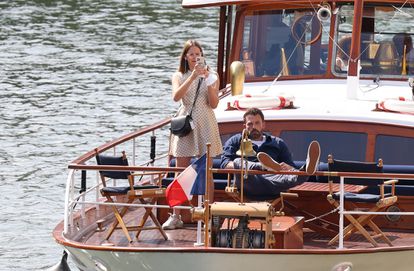