Izan Almansa, the MVP of the future 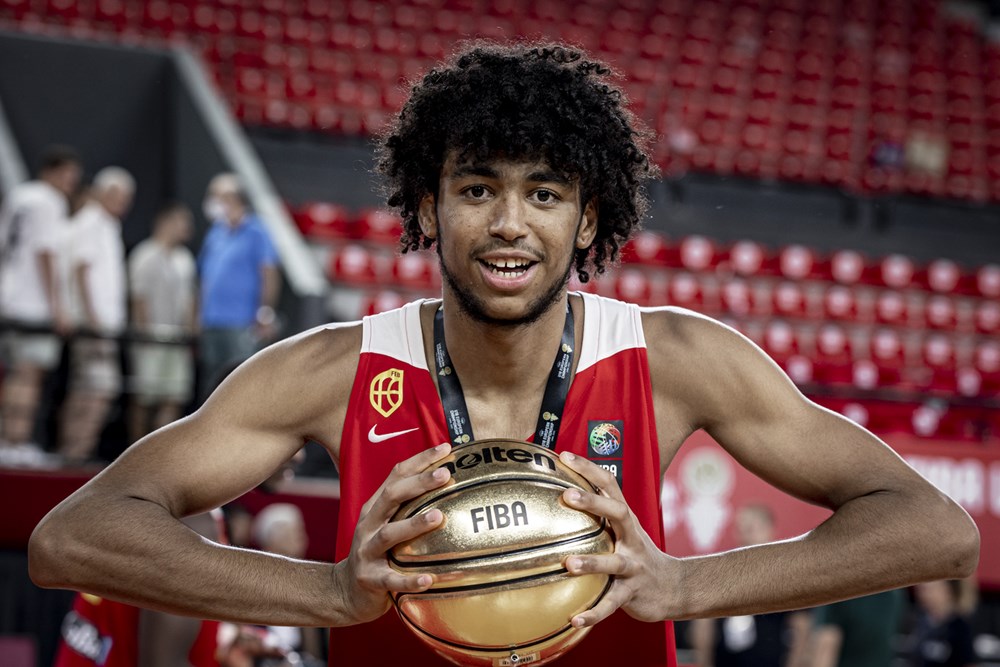 Izan Almansa (Murcia; 17 years old) dreams of the stars. He is not yet old enough to drive or enter nightclubs, but this young Spanish power forward will only see himself in a few years playing on the NBA courts and who knows if with a championship ring on his finger. An ambition fruit of the talent and perseverance of one of the great protagonists of the memorable summer of the lower categories of national basketball. In just one month, Spain has won five medals in five tournaments — gold in the men’s and women’s U-20 Europeans, as well as the U-18; and silver in the Men’s and Women’s Under-17 World Cups—, proving that the new generations are coming in strong with figures like Izan Almansa, MVP of the Under-17 World Cup and the Under-18 Eurobasket.

At 17 years old, Almansa focuses only on continuing to grow. Of course, sportingly, because despite the fact that he still has time to give another growth spurt, the Murcian is already 2.07 meters tall. His main references are two NBA stars: centers Nikola Jokic and Joel Embiid. Like them, Almansa is a modern inside player, capable of taking over the paint with his physicality, but also with the vision to organize the game and lead his team. In the U-17 World Cup, Izan averaged 12.1 points, 0.9 assists, 11.9 rebounds and 1.6 blocks per game. In the European under-18 he increased his offensive production to 15.7 points and 1.6 assists, adding 10.7 rebounds and 1.1 blocks.

This rough diamond has been entirely polished by its mother. His father, former American player Steve Horton, who went through the lower divisions of Spanish basketball, left them when he was barely born. Despite the fact that in childhood his greatest hobby was soccer, he got hooked on the basket at the institute, in Murcia, playing with friends. His size and intelligence to move the ball around the court caught the attention of his physical education teacher, who also worked for UCAM Murcia, and signed him for the youth team.

Then, Almansa began a frantic climb. Two years in Murcia at a high level before making the leap to Real Madrid, who signed him for the youth team. Still without fluff on his mustache, he was proclaimed champion of Spain and was chosen in 2021 as the sixth European player with the greatest projection by EuroHopes (recognized internet portal for evaluating young players). The power forward began to attract more and more attention and a proposal that he could not reject came into his hands.

The Overtime Academy, located in Atlanta, United States, was founded last year as a project to develop players from a very young age with world-class training, cutting-edge sports science technologies, first-rate facilities and a personalized academic program. Behind this initiative is the investment of Jeff Bezos, rapper Drake, and many NBA figures such as Carmelo Anthony, Kevin Durant, Klay Thompson and Pau Gasol.

Almansa became the first Spaniard to sign with the Overtime academy and this last year he has spent in Atlanta, away from his family and friends, but closer to achieving his dream of playing in the NBA. “In the United States, basketball is seen differently, and coming here and competing against the best from around the world every day is going to help me a lot in my development,” Almansa said upon his arrival in Atlanta. Overtime’s commitment to Almansa is not limited only to sports and academic training, or its projection within the American market. He also guarantees her an unthinkable salary for a boy his age. Each Overtime player earns a six-figure salary, with a guaranteed minimum of at least €100,000 a year, plus goal bonuses.

In two years, he will be able to present himself for selection in the NBA draft, the same season as LeBron James’ son, Bronny. Until then, Izan Almansa’s path is mapped out.