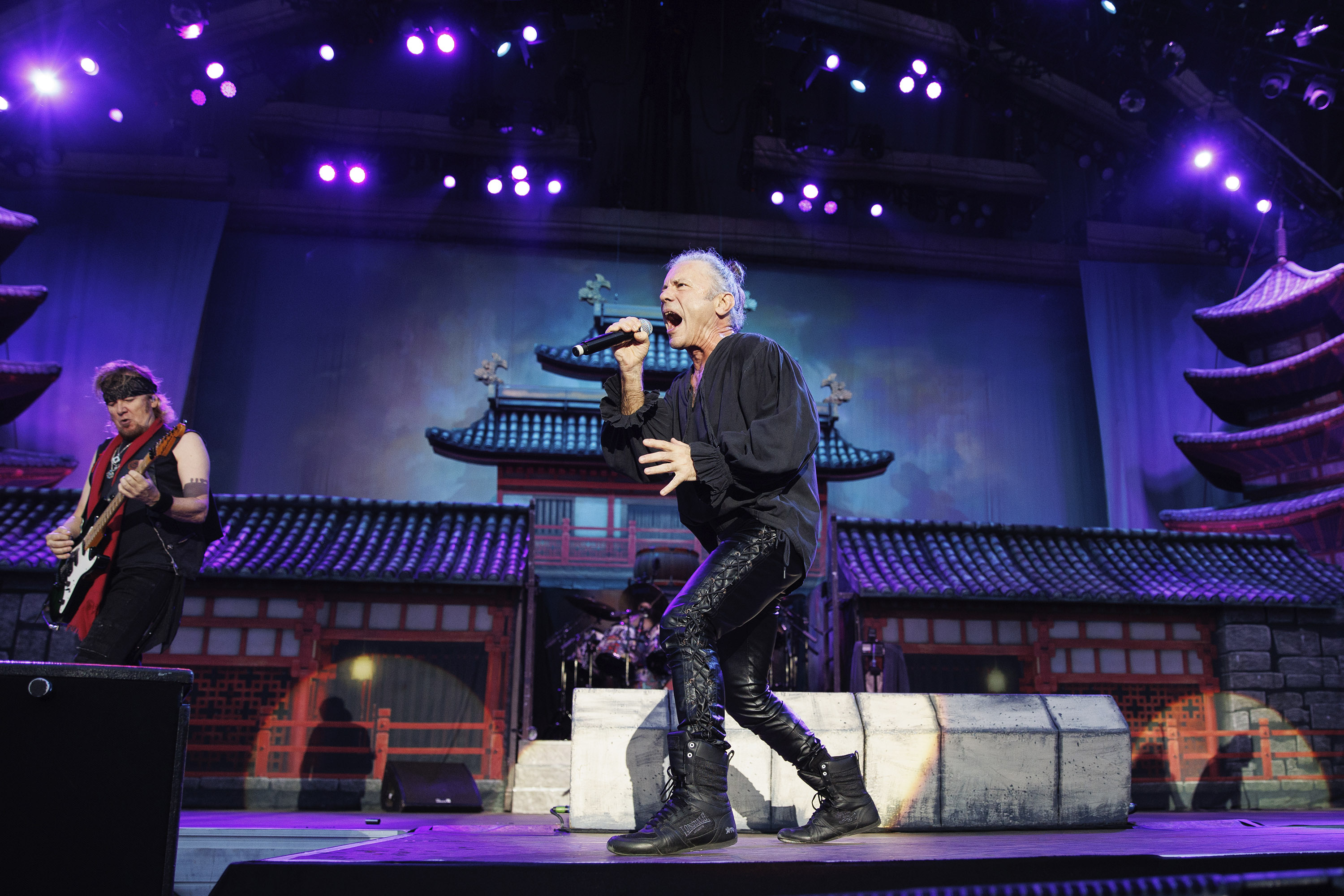 Fifty thousand people, 47,234 black shirts. Why wait for the daylight to go out when a huge black spot obscured the view of the members of the group? A tapestry in a state of excitement before the appointment of the season, an entire Olympic Stadium to say that heavy metal is here and that it will be extinguished only when a meteorite hits the planet. It was 9:53 p.m. this Friday, the public address system spat out the welcome anthem, Doctor, UFO Doctor, and the crowd began to punish their throats. Three minutes later the Senjutsu drums announced the beginning of the theme and Bruce Dickinson, hair tied up in a samurai bun, totally black in his clothing, appeared on stage deafening the stadium and gesticulating with his feet anchored to the ground, legs bent. The crowd responded by punching the air with their fists. Stratego and The Writing On The Wall closed the review of the group’s latest album to open the concert. The rest songs that have made the history of the band. Iron Maiden in mode to satisfy the fans. And boy did they do it!

Pérez Galdós, little suspected of sympathizing with Iron Maiden, defined them when he thought he was doing it with Fortunata by saying “consistent as a nail, that is where they nail it”. That nail was driven in the eighties and now, with forty years of history, it holds stadiums. There have been changes and some evolution, but there it is, without a hint of rust, more and more resistant, true to its meaning. And he knows where he is, because Dickinson greeted him with a “hello, Catalonia” that he later supported with an allusion to Barcelona in what was his only concert in Spain. By the way, at his age, 63, he sings like a kid, above the roar of a band stitched together with virtuoso guitar solos, stitching that evokes the rock of a lifetime, the one that shows his best health and convening capacity in the fields of heavy.

At 9:20 p.m., with daylight escaping frightened, I change scenery. The Japanese architecture that set the three themes of Senjutsu gave way to a gothic cathedral interior with stained glass windows and lamps that simulated the quivering soul of a candle. Revelation played, from the distant eighties and the public began to taste what was marked on the menu, a review of a good part of the group’s hits. Two side screens were limited to magnifying the musicians, with no other intention than to put faces and gestures on them, and in Blood Brothers, Dave Murray’s guitar once again punctuating the theme, the stage was already enveloped by the ambient darkness. Sing Of The Cross was the last nod to the 2000s, because then the concert, already unleashed, sailed into the eighties and the crowd went wild. The heavy public, one of the best on the music scene, connoisseur, militant with criteria, friendly and now without as much hair as before, yes, fashions change everything, received the best gift, the songs that sustain their memories of the day before yesterday , yesterday or, in the case of the oldest, when they wore long hair because they represented belonging to the club.

Depending on how tempting it was not to look at the scene and direct your eyes at that mass that let you see its arms like an electrified reedbed. With hardly any cell phones. And that there was pyrotechnics, an imposing Icarus, a double flamethrower handled by Dickinson with two hands, smoke to cloud London, wholesale fire, costumes, a cage where Dickinson sang with his hair in the wind and in a white shirt, an inflatable Beelzebub and a parade of imagery that despite its gloomy veneer demanded to be read with a smile. The heavy paradise consumed on a stadium scale, something the group had never achieved before, frequenting smaller venues.

More hits fell: The Number Of The Beast, Iron Maiden, The Trooper, Run To The Hill, a hulking Spitfire and a final Aces High prelude to the farewell tune, Always Look On The Bright Side Of Life, from Monthy Phyton to march home smiling. The public ended up satisfied, exhausted and probably hoarse, the lyrics were well known and after the pandemic postponement the desire to sing them had multiplied. In the end, the time came, and Iron Maiden did not fail. Heavy metal does not survive: it lives. The nail is still there.

On the go together with the digital camera: Thrilling photograph locations between Kiel and the Dolomites

Puerto Morelos, the pleasure of calm can be skilled within the Riviera Maya

Sánchez: "Spain is and will be at Serbia's side in the Kosovo dispute"