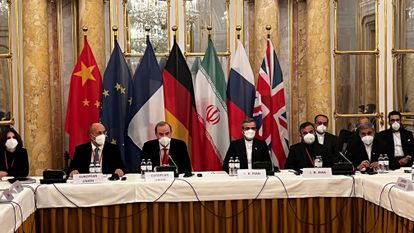 Negotiation on the Iranian nuclear agreement, in December in Vienna. HANDOUT (AFP)

Iran announced this Monday that it is going to offer an imminent response to the final proposal presented last week by the European Union to reactivate the nuclear agreement that it signed in 2015 with the great powers, which has languished since 2018 after the door slammed by the United States under the presidency of Republican Donald Trump. Foreign Minister Hosein Amir Abdolahian assured that Tehran would send its final considerations “before midnight.”

“If our criteria are accepted, we are ready to confirm an agreement at a ministerial-level meeting,” the head of diplomacy anticipated in statements collected by the state news agency IRNA. Abdolahian has not yet shown his strengths on the table and limited himself to demanding that Washington “show flexibility” to resolve three pending fringes, whose content he did not specify.

The guarantees on the firmness of the agreement for the US and the cancellation of the ongoing investigation by the International Atomic Energy Agency (IAEA) on uranium remains not declared by Iran are pointed out as some of the main obstacles to the reactivation of the atomic pact , signed seven years ago with the mediation of the EU. In essence, the great powers (China, Russia, the United Kingdom, France, Germany and the United States) promised to lift the sanctions imposed on the Tehran regime if it agreed to submit its nuclear program to international control, in order to prevent it from acquiring of the atomic weapon.

The spokesmen of the Islamic Republic had already advanced on Friday that the final text proposed by Brussels could be “acceptable” if it offered safeguards for its key demands. Hours later, the attempted assassination in the US of the British writer Salman Rushdie, on whom a fatwa (religious sentence for blasphemy) weighs in Iran, put new spokes in the wheel of talks that have been going on for more than 15 months.

The feeling that is beginning to spread in the European capital, after hearing Iran’s first words and not yet knowing the content of the written response, is that of a repeated chapter. Already in other rounds of negotiation, when the end seemed near, everything was suspended. The last time was in March, shortly after the war in Ukraine began. Then, the Russian demand that its commercial relations and its association plan with Tehran not be affected by the sanctions derived from the conflict led to the suspension of the dialogue.

Now, once again, the end seems to be near after the proposal submitted by the EU, coordinator of the negotiations by designation of the United Nations and represented by the Spanish diplomat Enrique Mora. Community diplomatic sources pointed out last week to this newspaper that this time no more delays or tricks to buy time could be accepted. However, as Tehran has not yet exposed the dimension of its latest claims, official spokesmen declined to comment on Monday.

Washington has shown its initial willingness to reach an immediate understanding for the reactivation of the nuclear agreement on the basis of the latest European text, without modifying the final version. This Monday he pointed out that “Iran must dispense with added, strange and unacceptable demands that go beyond the scope” of the nuclear agreement, according to State Department spokesman Ned Price, Reuters reports.

In Tehran, Minister Abdolahian insisted on Monday that the US should respect its “red lines” to close a pact in the coming days on “three pending fringes.” Iran claims that no future US presidential administration can disassociate itself from the nuclear agreement, as Republican Trump did in 2018 on what was signed by his predecessor, Democrat Barack Obama.

But the Biden Administration considers that it is a political agreement and not an international treaty. “They (the Americans) have to take a more realistic approach to guarantees,” the Foreign Minister has now emphasized, noting that Washington seemed to be showing “relative flexibility regarding the other two issues,” although only “in verbal form and without reflecting it in the text”.

The Iranian regime is also demanding concessions in what it calls “impartial inspections” of its nuclear facilities. “Relative progress has been made, but it still does not meet our demands,” said Foreign Ministry spokesman Nasser Kanaani. “We have other expectations pending fulfillment by the other party,” stressed the diplomatic spokesman.

Meanwhile, in Israel, Tehran’s greatest regional enemy, it is estimated that Iranian leaders will not sign an agreement that is limited to replicating the one already signed in 2015, according to the Haaretz newspaper, which cites senior officials of the Hebrew government. . Despite its close alliance with Washington, the Jewish state reserves the right to attack targets of the Iranian nuclear program if it comes close to manufacturing an atomic bomb.

Elections in the United States

In Brussels they believe that if the new agreement is not closed now, it cannot be sealed for quite some time. At the turn of summer, the United States enters the electoral phase for the mid-term legislative elections; and in this context it will be very difficult for President Joe Biden, who already has a narrow margin due to the great hostility of the Republicans to the pact, to sign anything.

Faced with the tactical reserve in the declarations of the parties, the head of the Russian negotiators, the Ambassador Mikhail Ulyanov, who, as soon as he heard the first words of his Iranian partners, wrote: “Encouraging signs.” Russia is, along with China, one of the signatories of the pact close to Iran. In addition, before the start of this round of negotiations, Russian Foreign Minister Sergey Lavrov visited Tehran, where he accused the United States of hindering the negotiation and demanded the “immediate removal of all sanctions on Iran”.