The time has come on October 7th: Apple’s iPhone generation 2022 is finally fully on the market. The fourth remaining new model, the iPhone 14 Plus, will be released tomorrow, Friday – and it is a special feature for the group: there has never been such a large standard iPhone model. With the iPhone 14 Plus with its 6.7 inches, Apple apparently hopes to open up new target groups that previously lacked the money for the respective Pro Max model.

From this Friday there will be a total of two standard iPhone 14 models – the 14 (6.1 inch) and the 14 Plus. In addition, the Pro variants iPhone 14 Pro and iPhone 14 Pro Max, which were sold significantly more this year, are already on the market. The iPhone 14 Plus replaces the iPhone 13 mini, arguably Apple’s most controversial iPhone model. It’s said to have sold very poorly recently, but the compact 5.4-inch form factor – first introduced with the iPhone 12 mini of 2020 – had its fans. The 6.7-inch iPhone 14 Plus is likely to be too big for them.

Only Apple knows whether the demand for the iPhone 14 Plus is greater than for the iPhone 13 mini. According to initial estimates, interest was mixed. After all, the delivery times have recently gone up. If you want to buy an iPhone 14 Plus directly from Apple, you have to wait almost a week. However, it can be assumed that stocks will be available in the shops tomorrow – possibly with some queues.

The iPhone 14 Plus can be considered the direct successor of the iPhone 13 Pro Max – albeit with worse camera equipment (two instead of three lenses); this corresponds to the iPhone 14. A slightly upgraded Apple A15 SoC is installed, which originated in the iPhone 13. The display has the said 6.7 inches like the iPhone 13 Pro Max, but the Super Retina XDR display comes without always-on technology or 120 Hertz. 1200 cd/m² peak brightness for HDR content is achieved, true tone and wide color gamut are supported. The “Notch” with the TrueDepth face recognition module has been retained, the Dynamic Island is only available on the Pro models. Thanks to the larger battery, Apple promises “the best battery life ever for an iPhone”; tests have to show whether this is true in practice. 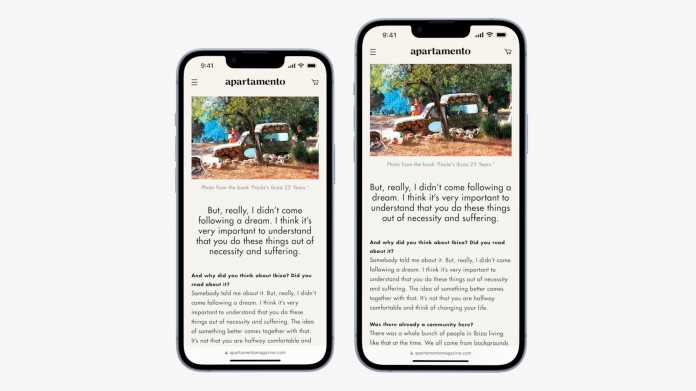 The iPhone 14 is only available in two sizes, the Mini is apparently history.

The price of the iPhone 14 Plus could discourage some interested parties from buying it: Apple clearly breaks the 1000 euro mark. At least 1150 euros have to be paid for 128 GB. The maximum equipment with 512 GB even comes to a mere 1540 euros. However, the iPhone 14 world no longer starts at less than 1000 euros anyway: For the iPhone 14 with 6.1 inches, between 1000 (128 GB) and 1390 euros (512 GB) are worthwhile. Meanwhile, Apple continues to sell the iPhone 13 mini: It starts at 800 euros. The 13 Pro Max is also still available in stores, but is still slightly more expensive than the iPhone 14 Plus.

The links marked with are commission links (affiliate links). If an order is placed via such a link, heise online receives a commission. This does not result in any additional costs for the buyer.

Hazard in Spain: ‘La Niña’ might be repeated for the third time in 2022

“The Settlers – New Alliances”: Technique sport is scheduled to seem on February seventeenth

Jordi Cruz to Patricia Conde within the closing of ‘MasterChef Celeb’: “You’ve gotten been an absolute disappointment”

Attackers may disable Safe Boot on sure Acer notebooks