Internet against climate change, isolation and the gender gap in the Gran Chaco Americano 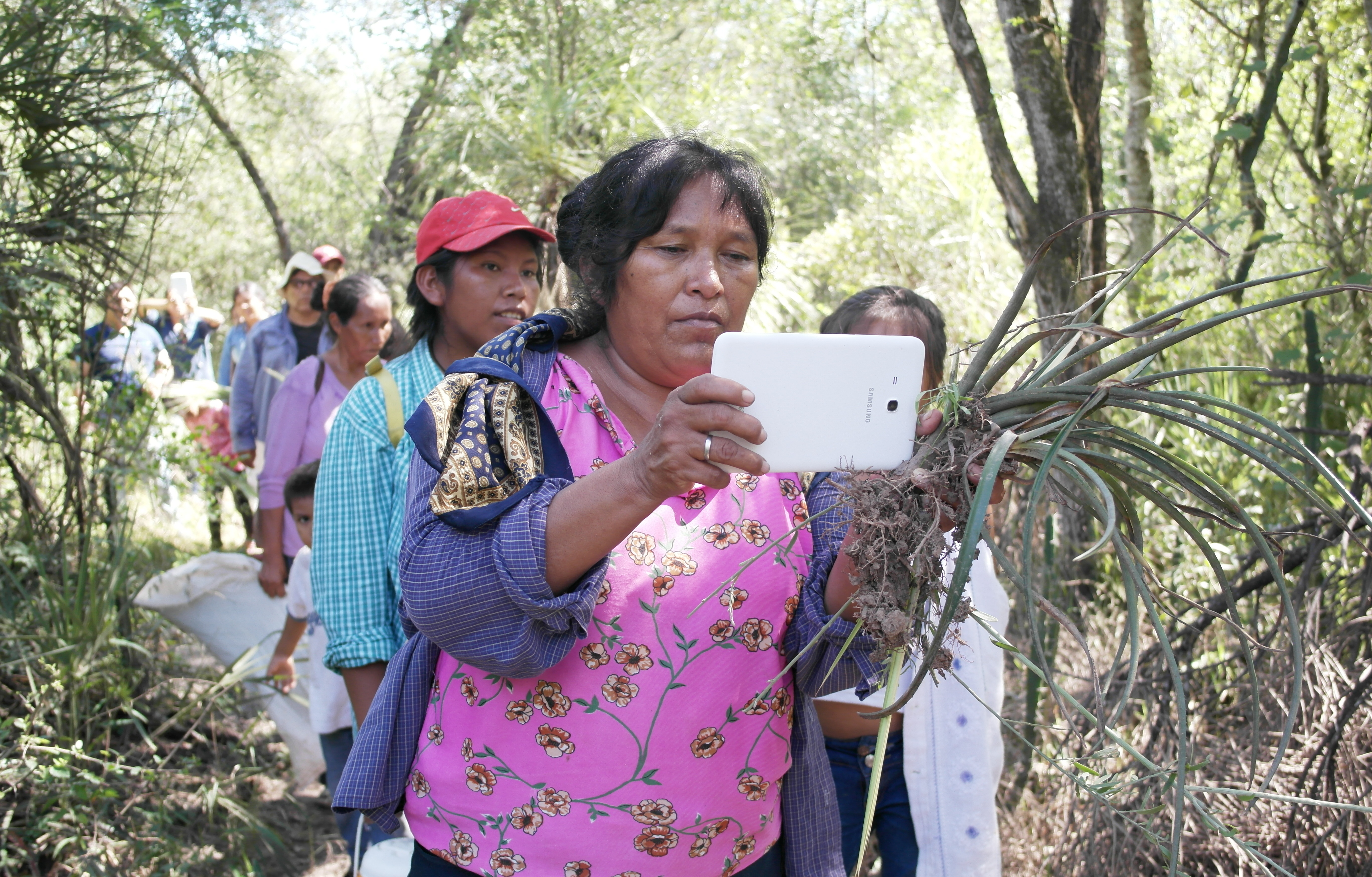 Norma Rodríguez is an artisan who lives in Lote 8, Formosa, in northern Argentina. For many years she did not know the price of what she was selling: foreign buyers took the handicrafts in exchange for used clothing. Inés Romero is a farmer and lives in Puesto García, Bolivia. For years, frosts that she could not foresee would spoil her production of tomatoes or peppers.

Rodríguez and Romero inhabit the Gran Chaco Americano, the second largest forest on the continent, behind the Amazon: a million square kilometers that cover Argentina, Bolivia, Paraguay and a small portion of Brazil. For these women, the lack of internet connection was for a long time a barrier to develop their economic activity or access health services or information. And although both are now connected to the Internet, this barrier persists for the majority of the inhabitants of the region, where more than 8.7 million people live.

In recent decades, the Gran Chaco has suffered urbanization and deforestation. This has caused soil erosion, desertification and changes in the hydrological regime, with cycles that include extreme floods and droughts for long months, according to data from the non-profit organization Mongabay. Between 2000 and 2019, 8.7 million hectares of natural vegetation were lost, according to the Avina Foundation. Between 2010 and 2018, deforestation devastated 3.5 million hectares, according to the Guayra Paraguay association. All this makes it the most vulnerable area to the effects of climate change in Latin America.

“There is a historical lack of public and private investment in this region that, combined with the isolation faced by its communities, makes it difficult for them to access public information, markets, innovation or real-time climate information,” explains Florencia Iacopetti, coordinator general of Nanum Connected Women. This initiative promotes internet access in rural communities of the Gran Chaco to accelerate economic development, innovation and adaptation to climate change in the region. Fabiana Menna, manager of the Gran Chaco Foundation, points out that, without connectivity, the furthest behind are women and girls. “While they carry out domestic tasks, the men travel to nearby towns in search of connectivity. They are the owners of the motorcycle, the bicycle or the car, and also of the telephones”.

According to a study by the Inter-American Development Bank on Gender and Connectivity, internet access would help close the gender employment gap. In parallel, women and children are 14 times more likely to die during an environmental emergency than men, says an Oxfam report.

Rodríguez, the Formosan artisan, chairs the Gran Chaco Artisan Women’s Cooperative (COMAR), a network of indigenous women who came together to scale up their production and sales. “We learned to use computers, to open a Facebook page or put together an Excel spreadsheet with our prices,” she details. Thanks to the Matriarca social enterprise, the cooperative sells its products throughout Argentina and on other continents. Since she has internet, Rodríguez exchanges experiences with women who are hundreds of kilometers away from her community, even in other countries.

“Without connectivity, the furthest behind are women and girls. While they carry out domestic tasks, the men travel to nearby towns in search of connectivity, they are the owners of the motorcycle, the bicycle or the car, and also of the telephones”

Jessica Sosa, also from COMAR, lives in Campo del Cielo, a community of about 500 inhabitants in the province of Formosa where connectivity is recent. “Before, to check messages and orders we had to travel by motorcycle or hitchhike three kilometers by land and 32 kilometers by road to Las Lomitas, the closest town, and use mobile data,” she says. The Internet changed everything. Even the need to go to Las Lomitas, where the nearest bank is, to withdraw money: Sosa today uses virtual wallets.

The United Nations recognizes internet connectivity as a human right, which in turn is enabling: it allows access to other rights, recalls Iacopetti, coordinator of Nanum Connected Women.

The Internet also improves access to education. “We had to spend 10 bolivianos (around 1.5 euros) a day to buy a mobile data connection so that the kids could access the materials for their virtual classes during the pandemic,” says Romero, the Bolivian farmer. She also explains that, thanks to YouTube videos, she and her classmates learned how to make organic fertilizers, which are cheaper than chemical ones.

Lacking an Internet connection also prevents artisans, who go out into the mountains to gather fibers for their crafts, and farmers from having climate information in real time. “Now, if there is a forecast of frost, we cover the tomatoes and peppers so they don’t spoil,” says Romero.

There is a precedent in this sense. Redes Chaco (a network of networks that promotes sustainable development in the region), with the support of Fundación Avina, the IDB Investment Laboratory, and the Nordic Development Fund (FND), developed an early warning system (SAT) that helped to 80,000 farmers and inhabitants of the Pilcomayo River basin during the great floods of 2018. “The SAT avoided enormous economic losses, but it also saved human lives,” recalls Iacopetti. The system uses different channels, such as WhatsApp and Telegram. A report by the Global Commission on Adaptation points out that, with just 24 hours notice in cases of nearby storms, damage can be reduced by 30%.

According to the International Telecommunication Union (ITU), less than half of the world’s women are connected to the internet. In turn, a study by the University of Oxford warns that rural women are the least connected group in Latin America and the Caribbean.

Menna, manager of the Gran Chaco Foundation, explains that, in the rural areas of the Gran Chaco, the low population density and the lack of an electrical network discourage large companies from providing connection. Although there is no data on how many communities in the region have access to the Internet, Menna points out that in many places the service is so bad that with luck a WhatsApp message is sent. For this reason, he emphasizes, we must focus not only on coverage, but also on the quality of connectivity.

The Nanum Connected Women initiative began nine years ago to pay off this debt. It is co-financed by the IDB Innovation Laboratory, implemented by Avina, the Gran Chaco and Nativa foundations, Grupo Sunu and has the support of Redes Chaco. During its first phase, the project provided community connectivity to 40,000 people and provided digital literacy to 2,300 people through 20 centers in Argentina. Now it aims to scale the model to Bolivia and Paraguay with another 40 centers. In addition, in Argentina it seeks to provide home services through Sol Rural, a social enterprise that trains local women so that they can provide the service in their communities. Microsoft joined the project: it contributed $100,000 so that families could access microcredits that would allow them to buy the necessary hardware.

Marcela Zamora, manager of Nanum Bolivia, points out that there are people who have never used a computer and that women work a lot at home and it is difficult for them to be absent for training. For this reason, once the minimum infrastructure and basic knowledge are installed, they offer virtual training. “In the Nanum centers in Argentina, 80 or 90% of the people who accessed the internet did so for the first time. Thanks to this, many women were able to study or access health services,” adds Iacopetti. Mariana Franco, in charge of Nanum’s actions in Paraguay, adds: “The Internet allows rural communities far from large urban centers to access public information and training processes. And also narrating to the world: sharing their values, their culture”.

This has been the brutal attacks by taxi drivers on VTC drivers in Seville: "We can't take it anymore"