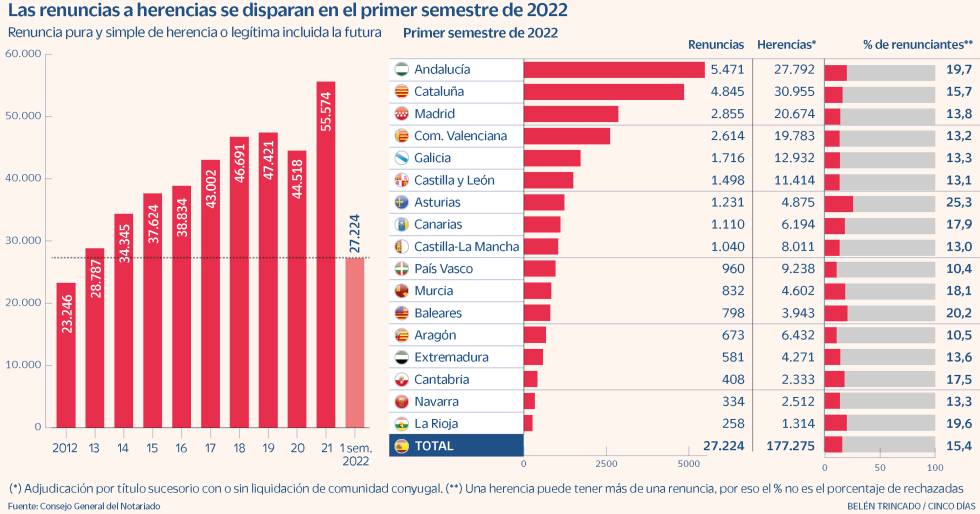 The year 2021 ended with an absolute record both in the number of inheritances processed by the Spanish and in the number of resignations on these transmissions. In total, the year closed with 365,897 adjudications by inheritance title, 22% more than those recorded in 2020. In turn, 55,574 people who appeared as beneficiaries decided to reject the succession, in this case 25% more than in the previous year .

The year 2022, according to the first data compiled by the General Council of Notaries (CGN), seems to close along the same lines. There are two great reasons behind it, as the CGN spokeswoman, María Teresa Barea, advances. On the one hand, the carryover effect of the excessive mortality experienced during the worst of the pandemic. On the other, the debts that force many to reject the process.

The data for the first half of the year, now closed, show that between January and June some 177,200 successions were processed, with some 27,200 heirs who decided to reject their share. According to Barea, the numbers for the second semester usually coincide with those of the first, so the final balance of 2022 will predictably be around 350,000 awards by succession title and 54,000 resignations. These are very similar figures to those of 2021 and totally atypical when compared to the years prior to the health crisis.

“There is still an excess of inheritances that is explained by the number of deaths that occurred in 2020 and by the deadlines at the time of processing the succession,” says Barea. It is expected, in fact, that the trend may continue until 2023 and even 2024, “since it is common for heirs to extend the process for two or three years” after death.

The increase in resignations, meanwhile, lies in other causes. The main one, emphasizes the CGN spokeswoman, is the existence of debts: “The heir finds that the deceased has left more liabilities than assets and therefore decides to reject the award.”

This possibility is much more common, he continues, in times close to economic crises such as the one unleashed after the outbreak of Covid-19, “when the property situation of the deceased may be more doubtful.”

The numbers of resignations to the inheritances, explains Barea, show the number of successors that reject a transmission. In other words, given that an inheritance can fall on more than one person, which is very common, the 27,000 resignations registered in the first half of the year do not translate into the same number of rejected inheritances, but rather into 27,000 people who choose to discard the transmission to which they are entitled.

However, says Barea, the proportion of quitters recorded year after year does serve to analyze the trend. This allows us to see how the percentage of reluctant heirs is growing slightly year after year, reaching 15.3% in the first half of this year.

The fear of possible debts, however, is not the only reason that leads an heir to reject the succession. The other major cause, with much less weight according to Barea, are the costs associated with the processing itself. Taxes such as Inheritance or municipal capital gains on real estate, for example, would come into play here.

These resignations usually occur in cases of “little liquid inheritances”, in which, for example, a house is received but not money. This situation, very common according to the spokeswoman, means that many heirs who at that time do not have liquidity are forced to reject the succession because they cannot afford the associated procedures.

The fiscal ratio, however, loses weight when analyzing the percentage of quitters in each community. According to Barea, although in the autonomies that most discount taxes such as Inheritance there are usually lower figures, the difference with the rest of the regions “is not so great that the tax aspect plays a primary role.”

The highest bonuses, for example, are given in Madrid, Andalusia or Galicia, where the weight of rejections ranges between 13.2% and 19.7%, a range similar to that seen in the Valencian Community or Catalonia , with higher tax rates. For this reason, “the data support the idea that the most frequent reason after resignation is the existence of debt and not the fiscal cost,” says Barea.

The notaries, faced with the growth in resignations, insist that the heirs familiarize themselves with the concept of “acceptance for the benefit of inventory”, which allows “leaving the pre-existing heritage safe from possible debt”, explains Barea.

This formula is designed to be used in those “gray inheritances”, when the assets and obligations to be received are unknown. Thus, the heir responds to possible debts only with the assets that are part of the legacy itself, without risking his previous assets.

Notaries, however, regret the lack of knowledge about this possibility. In 2021 only 1,300 heirs made use of this figure. In the first half of 2022 the figure reached 543 people.